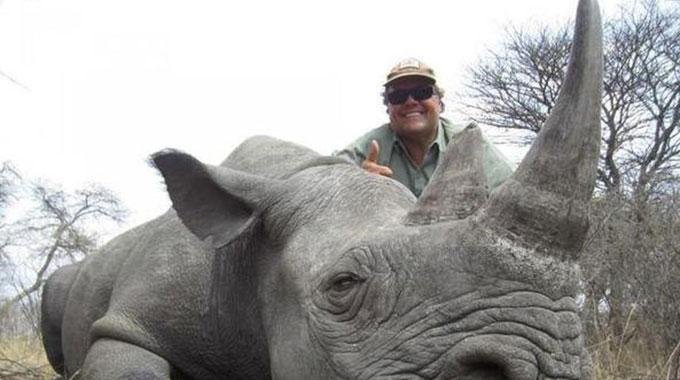 Some of the menu items at the recently-opened Jimmy John’s Gourmet Sandwiches on Elmwood Avenue may lend a whole new meaning to the term “bagging” lunch.

That’s because Jimmy John’s owner, James John Liautaud, is an avid big game hunter who loves to travel to places like Africa, seek out big, beautiful, wild animals, and shoot them dead––his notion of “sport.”

Some of the menu items at the recently-opened Jimmy John’s Gourmet Sandwiches on Elmwood Avenue may lend a whole new meaning to the term “bagging” lunch.

That’s because Jimmy John’s owner, James John Liautaud, is an avid big game hunter who loves to travel to places like Africa, seek out big, beautiful, wild animals, and shoot them dead––his notion of “sport.” According to one hunting magazine his victims include elephant, rhino, bear, leopard, lynx, wolf, hyena and zebra.

“I choose to hunt and I choose to fish,” he declared in a recent, Nov. 2015 Chicago Tribune interview. “Everything I’ve done has been totally legal. And the meat has been eaten, if not by me, then by someone…”

You may want to factor that into your meal-time deliberations.

The new “Gourmet Sandwich” shop, or what was once commonly referred to as a “deli”, is located on the ground floor of a new $3.5 million, three-story building at 770 Elmwood, between Cleveland and Auburn Aves. Jimmy John’s has three other stores locally, near the north and south UB campuses and on Transit Road, Williamsville.

Somewhat surprisingly, there appears to be no appreciable backlash from the Elmwood community, an upscale, hip enclave progressive on social issues, with regards to the background of their newest neighbor and merchant. Most of the kvetching on the Buffalo Rising and Buffalo News web sites centers on the advisability of locating yet another soulless national chain restaurant on the strip, detracting from its trendy and distinctive character.

For example, “Wow really? Jimmy John’s? Whoever the franchisee is (at) this location is out of touch. Opening a chain sandwich shop next to Globe, Spot, Panera and down the street from a multitude of others in a neighborhood that chooses local over national 8 times out of 10 is a little idiotic.”

While the Elmwood Village Association web site features a section entitled, “WHAT IS THE ELMWOOD VILLAGE ASSOCIATION?”, perhaps the more relevant question would be “WHERE IS THE ELMWOOD VILLAGE ASSOCIATION?”, given that “(t)he purpose of The Elmwood Village Association is to preserve and protect the unique and historic nature of Elmwood Avenue and its surrounding neighborhoods by increasing civic involvement and encouraging neighborhood revitalization.”

A search of its site on “Jimmy” yields nothing, while a search on “sandwich” only lists contact information for Erbert & Gerbert’s Sandwich Shop down the street.

Of the many on-line comments, only a couple touch on the disgusting hobby of Jimmy John Liautaud, including “Not to mention that Jimmy John Liautaud likes killing big game animals. Just google him. That will go over well in the EV (Elmwood Village) neighborhood.”

According to Wikipedia, Jimmy also bankrolls NASCAR, Ultimate Fighting and something called the “Jimmy John’s Freaky Fast 300” at Chicagoland Speedway,

Some on social media are calling for a boycott of the new Jimmy John’s eatery, in protest of the noble creatures that have served as target practice for the sandwich tycoon. One Facebook post reads “Bad enough another fast food joint is opening in our neighborhood… but this fat f*** is the owner. Shame on any neighbor who crosses its threshold (which I expect none will), and the sandwiches probably suck anyway. Let’s hope it fails miserably and closes soon.” Another person added “I’ve been complaining about this stupid chain restaurant since I saw the “coming soon” sign. I read about this a**hole’s trophy hunting last summer. It’s disgusting. I hope the Elmwood location is a huge failure.”

On the other hand, one individual using the handle @Cara_Ann_B disagreed, tweeting “Unless JJs is secretly putting rhino meat in my #12 Beach Club, I’m not abt to boycott delish sandwiches #JimmyJohns.”Jimmy John (right) embraces a Delta Leopard he apparently killed in 2010.

Boycott and ostracization of a business because of an appalling propensity on the part of its owner to shoot defenseless animals is not without recent precedent, as dentist Walter Palmer of Eden Prairie, Minnesota recently found out the hard way.

Palmer’s alleged poaching of an elderly, revered lion named Cecil during a Zimbabwean safari, baiting the animal and then using a bow and arrow to maximize the cruelty of the act, caused an international sensation. His Facebook, Yelp and business web site pages were all inundated with recriminations and enen threats. He had to close his dental office and drop out of sight for an entire month for personal safety reasons.

We are in no way advocating similar harassment. However, given the panoply of lunchtime and snack options available along the Elmwood strip, an economic boycott could send a powerful message to the Jimmy Johns of the world.