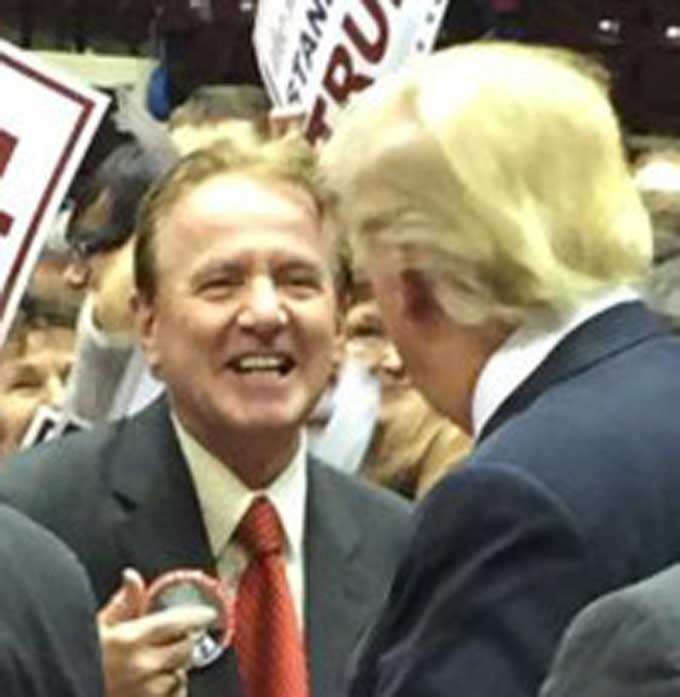 Flamboyant and entrepreneurial Rick Snowden, who owned a nightclub and the historic Miller Mansion on Nottingham Terrace in Buffalo where he hosted several spectacular parties between 2004 and 2010 - many of them to benefit local charities - has now become one of Donald Trump’s most ardent and visible supporters.

Flamboyant and entrepreneurial Rick Snowden, who owned a nightclub and the historic Miller Mansion on Nottingham Terrace in Buffalo where he hosted several spectacular parties between 2004 and 2010 – many of them to benefit local charities – has now become one of Donald Trump’s most ardent and visible supporters.

A political junkie for most of his 64 years, the colorful Snowden was featured in a New York Post story last week where he was described as possibly the “Trumpiest of the Trumpsters,” given the fact he has attended 28 Trump rallies across 13 states.  And along the way, he has gained recognition among Trump supporters and the presidential candidate himself as perhaps the leading Trumpster and has designed a line of Trump buttons that are growing daily in popularity.

“I’m certainly on board with Mr. Trump’s candidacy,” said Snowden who was in town this week to spend time with his children.  “He [Trump] brings out dedication, loyalty and rock-hard support in us, and I’ve never seen anything quite like it before.”

Snowden, who owns a very popular bed and breakfast on a 43-acre hill top estate near Nashville, Tenn., has followed the Trump campaign from the beginning, driving 28,000 miles and flying another 7,500 to attend all the rallies that have drawn crowds of as many as 20,000 to cheer on the billionaire Republican presidential candidate who has been the frontrunner from the start.

Snowden said for the most part, the Trump rallies are peaceful except for the occasional interruption by people he suspects are being paid to create disruptions at the gatherings in an effort to hurt Trump’s drive for the nomination.  While he won’t talk details, Snowden believes Trump will come to Buffalo in the very near future and headline a rally where he would likely draw big crowds.  The Erie County Republican Committee unanimously endorsed the New York-based developer last Saturday.

When Snowden bought the Miller Mansion in 2004, he paid slightly less than $1 million for the estate and sold it for $1.7 million in 2010 before traveling to Carthage, Tenn., where he took up residence on the property that he now calls home and which has received top reviews as a bed and breakfast stop with six guest suites, a guest cottage, and a wraparound porch in the main house offering panoramic views (Airbnb.com).

Trump supporters and political junkies can contact Snowden at snocolv@aol.com