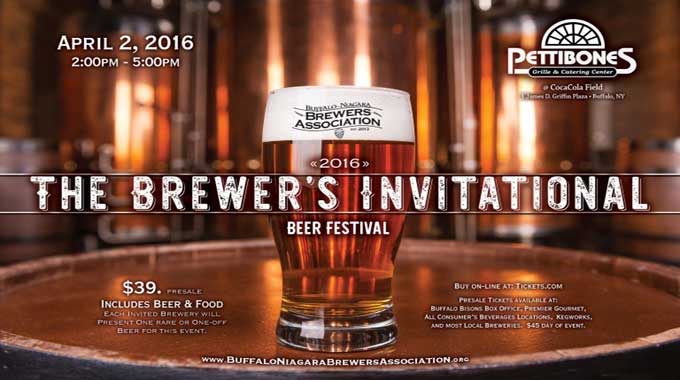 In advance of the highly-anticipated beer festival, let’s take a look at a dozen of the specially made, one-off brews that will be available only at the Brewers Invitational:

12 Gates Brewing DoubleGate Double IPA: This small batch double IPA was brewed with generous amounts of barley malt and run through with staggering quantities of Mosaic and Amarillo hops.

42 North Brewing Beer de Brut: An incredibly unique hybrid beer that falls somewhere between a Belgian Tripel, cider and white wine. Only 15 gallons have been made. 42 North will also be pouring a Farmhouse American Sour.

Big Ditch Brewing Chocolate Gose: Like chocolate covered sourdough pretzels? Big Ditch started with a complex malt bill that included wheat, oats, chocolate, debittered roasted malt and caramel wheat. Next, the beer was kettle soured with a Lactobacillus blend and a touch of salt was added as a finishing touch. It’s light bodied but wonderfully complex with a mix of sweet, sour, and salty.

Community Beer Works Pun Intended Gose: The cat ‘Gose’ meow, that’s how she ‘Gose’, boom ‘Gose’ the dynamite; you’ve heard them all before but you’ve never had a beer like this. Pun Intended is tart, dry, citrusy and mildly salty with a touch of coriander, exactly what you’d expect a traditional Gose to taste like.

Ellicottville Brewing Company St. Caberlicious Barrel Aged Imperial Stout: St. Caberlicious is a series of select EBC brews aged in a variety of Red Wine barrels. This version is a double barrel aged St. Jacobs Stout, which was first aged on French Oak and then placed in Cab barrels to age for one year.

Five and 20 Spirits and Brewing Barleywine: A high alcohol beer brewed with heavy malts and heavy hops making for a thick and dense mouthfeel. Deep amber in color, this barleywine has a sweet caramel flavor with pungent piney hop aromas. It finishes semi-sweet.   As an extra special treat,  samples of  Five & 20’s Barleywine Schnapps made with this same beer will be on offer!

Flying Bison Barrel Aged HERC Barleywine: A limited edition barrel aged version of their ‘HERC’ C-130 Strong Ale that has an extra dimension of oak and bourbon to give a richly complex profile.  This is a rare opportunity to taste one of Buffalo’s best bareleywines in very special format.

Gordon Biersch Double IPA: At 8.5% ABV, this is a strong hoppy DIPA with notes of pineapple and mango thanks to the use of Mosaic, Citra and Centennial hops.

The full tentative beer list is available online at www.buffaloniagarabrewersassocation.org.

A limited amount of tickets can still be purchased for $39. In addition to all of the beer, your ticket also includes a buffet of old school pub food ‘kicked up a notch.’ You can purchase tickets at Buffaloniagarabrewersassociation.org, Buffalo Bisons Box Office, all Consumer’s Beverages locations, Premier Gourmet, Kegworks and at local breweries. A limited number of Designated Driver tickets are also available ($15 when accompanied by regular ticket holders) and includes food, soft drinks and water. Designated Driver tickets may be purchased over the phone at (716) 846-2057 by credit card and will be mailed to you.