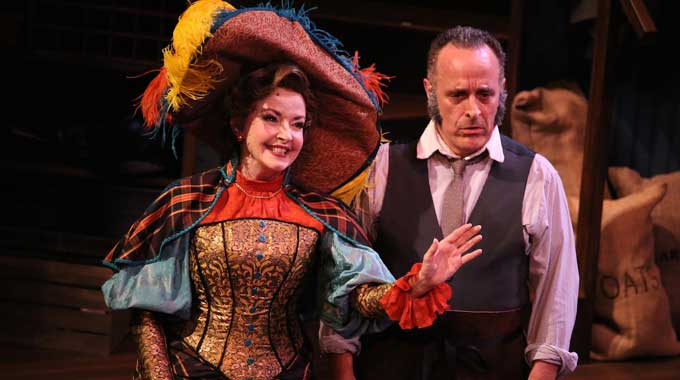 Artvoice caught up with Michele Ragusa shortly after she completed a triumphant run as the title character in Hello Dolly! at Riverside Theatre in Vero Beach, Florida. From Broadway, to Florida, to Kleinhans, the Western New York native and Niagara University graduate works all the time.

Artvoice caught up with Michele Ragusa shortly after she completed a triumphant run as the title character in Hello Dolly! at Riverside Theatre in Vero Beach, Florida. From Broadway, to Florida, to Kleinhans, the Western New York native and Niagara University graduate works all the time.

On Friday, April 22, she returns to Buffalo for a special one-night engagement in Kleinhans’ “Blue Room.” Henry’s Restaurant downstairs at Kleinhans will be transformed into an intimate cabaret for the occasion. Dinner catered by Oliver’s begins at 6 p.m.; the performance at 8 p.m. Reservations are required. Dinner-concert tickets are $125 each, with VIP tables assigned on a first-come first-served basis. A limited number of bar seats will be available for $40.

A percentage of the ticket price is tax-deductible, because part of the proceeds will benefit the restoration and maintenance of Kleinhans Music Hall. Take note: there is limited capacity, and a previous Blue Room performance in October was sold out.

With her glorious voice and radiant stage presence, what can we expect to hear from Ragusa’s storied Broadway career?

“Well … nothing,” deadpans Ragusa with her famously perfect comic delivery – the gift that attracted Mel Brooks when she was selected to succeed Megan Mullally in Young Frankenstein on Broadway.

“Think about it,” she says.  “What can I do from my Broadway career?  Something from Young Frankenstein or Titanic?  A Urinetown medley?”

She’s got a point.  Even her stint starring as Evelyn Nesbit, the girl in the red velvet swing from Ragtime offers little in the way of supper club entertainment.

“I’ve never put together a cabaret show from beginning to end, before,” Ragusa reveals.  She’s done symphony concerts and musicals galore, including appearances with the BPO – Funny Girl, Kiss Me Kate, and The Music Man among them.

What we can expect is an evening of stories from Ragusa’s life and career and selections from the American songbook.

“I do have a childhood memory of an arrangement done by my father that was performed by the BPO,” Ragusa recalls. “I have many memories to call upon for this show.”

Local performers Paul Todaro and Chuck Basil will make appearances with Ragusa, and Buffalo native Eric Alsford will serve as her accompanist on the piano.

“He was delighted when he found out that I had never seen Hello Dolly! ” says Ragusa.  “Not ever.  Not on stage and not even the film. [James Brennan] was delighted that I would be starting fresh with no preconceived ideas about how to play Dolly.”

The actress notes that a great deal of the original conception of the show is apparent from its structure.

“I was so surprised when I got entrance applause,” she says.  “But the role is structured as a star vehicle and the audience picks up on the cue.  It is a beautifully constructed show.”

Ragusa will bring this familiarity with how to entertain a crowd to “In the Spotlight with Michele Rasa” in the Blue Room at Kleinhans.