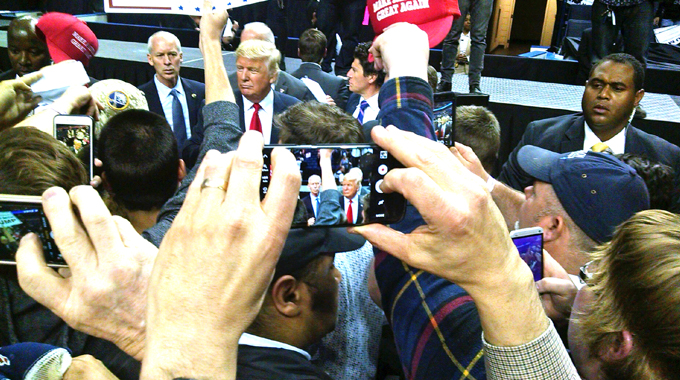 What better topic to introduce my new column in this paper than Trump’s visit to Buffalo Monday night?  So there I was, in the press pen, literally walled off from the event with no food, no booze, no nothing.  What a glamorous life the media lead.  Most of the press sat stoically at their laptops, hammering away and rarely even looking up at the speakers.  I had intended to schmooze some of them and get some inside scoops but I wasn’t feeling the warmth.

What better topic to introduce my new column in this paper than Trump’s visit to Buffalo Monday night?  So there I was, in the press pen, literally walled off from the event with no food, no booze, no nothing.  What a glamorous life the media lead.  Most of the press sat stoically at their laptops, hammering away and rarely even looking up at the speakers.  I had intended to schmooze some of them and get some inside scoops but I wasn’t feeling the warmth.

I did chat with a few local reporters whom I know.  One wanted to know what the libertarians think.  I said, some hate him, some support him based largely on his anti-foreign intervention, America First views.  How many illegal foreign wars has Hillary started or supported, I asked rhetorically.  Only professional spooks know for sure.  Keep in mind that the founder of the modern libertarian movement, Murray Rothbard,  supported (“cheered for”) LBJ in 1964 because he ran as the peace candidate: “We are not about to send American boys 9 or 10 thousand miles away from home to do what Asian boys ought to be doing for themselves.”

My own view mirrors that of Antiwar.com editor Justin Raimondo, a libertarian:

“I have never endorsed Trump . . . As I’ve explained many times, I am rooting for him, which is quite different from giving his candidacy political support. I’m much less interested in him as a candidate than I am in his supporters, many of whom are sympathetic to the anti-interventionist views Antiwar.com is dedicated to advancing.”

Raimondo has explained elsewhere that when you endorse a candidate, you are taking upon yourself responsibility for his whole program and its results and consequences.  Libertarians are reluctant or loathe to do that as Trump has taken several positions that are not libertarian.  Full disclosure:  I know several people working for Trump and have occasionally passed along ideas I hope will move Trump in a libertarian direction and I will continue to do so.

Another veteran reporter I talked to estimated that the crowd was as high as 16,000.  Other estimates are about 12,000.  Did the overhyping of the event scare supporters away?  In any event, it was a very large and enthusiastic crowd for a Monday night on short notice.  Comparisons to Bernie Sanders crowds are not apt.  Bernie has attracted large crowds by promising to give away lots of free stuff without ever explaining how to pay for it all.  This is typical of uber-progressives.  As I pointed out in Progressivism:  A Primer on the Idea Destroying America, progressives have no theory of costs, which in the real world, is a bit on the crazy side.  Hillary draws micro-crowds even though most of the people there, as in the case of her recent Buffalo event, are hacks who generally make their living off of politics or government.

Trump’s Buffalo crowd was far different.  These are working class folks, almost all white, with a smattering of minorities, who are seeking to “make American great again” as opposed to getting free stuff (Sanders) or special insider deals (Hillary). Another critical difference between Trump and Sanders supporters: age.  Sanders attracts people who recently emerged from thirteen to seventeen years of progressive brainwashing in K-12 government schools or colleges.  They still believe that godvernment will solve all human problems—that is all they ever heard.  They know little if any economics.

Trump’s people are different, averaging maybe 45-50.  They have been out of school long enough to realize that most of the stuff they learned in school about government is bull.  They have worked hard for decades and have little to show for it but stress and debt.  They know in their bones that the system is rigged and they cheer wildly when their hero pronounces this obvious truth.  Much of the crowd was on its feet throughout his speech.  I have no hesitation about endorsing Trump’s supporters and rooting against Trump’s elite opponents including the GOP machine, the Democratic Party, the MSM, the neocons, and the left.

The left was present inside and outside the rally.  There was a large and peaceful, even docile group across the street from the arena.  They were mostly white.  One sign read “Dawn of the Brain Dead.”  Another read, “Dead Clown Walking.” That’s how the left shows its “love”, a theme on several signs.  A few minutes into Trump’s speech, a group of protesters right in front of the media section, locked arms and legs to form a human chain and began chanting.  It took about five minutes to clear them out during which time, it was difficult to hear Trump and the media’s full attention was diverted from Trump’s speech.  This is just the latest example of the left’s accelerating hostility to free speech.  The use of physical force and interference to drown out a speaker at an arena he has rented and thus temporarily owns, can best be described as thugishness.  Judging from the perfectly-organized execution of the protest, this is also thuggery that was well-planned and practiced beforehand, indicating a high degree of organization.  Who is organizing and paying for all this?  Can I FOIL the left please?

The left calls Trump a fascist but uses fascist tactics against him.  Notice that Trump’s supporters do not reciprocate.  They make no concerted effort to interfere with or shut down Bernie’s events.  Hillary’s events of course need no interference as they are rare and sparsely attended.  Hacks are lazy I guess.  Shouting opponents down is a Freudian slip by the left that constitutes a confession of their essential intellectual bankruptcy.  As I demonstrated in my book, progressivism is not a rational system of thought.  Leftism is progressivism on steroids, an apt metaphor for emotional infantilism and rage masquerading as an ideology.

Trump spoke for about an hour giving his usual stump speech.  I was paying more attention to the crowd as I have heard the speech many times.  Except for the part about “New York values” where he looked at notes, he winged it and never stumbled.  This is in sharp contrast to professional politicians addicted to speech writers and teleprompters.  Love him or hate him, you have to admire the talent and the brains.  He has run circles around his opponents and outfoxed the most powerful forces in American life, all the while being outspent many times to one.

The crowd loved his speech, however, near the end, the Monday blues took effect and the energy level declined.  Hating Mondays is not the natural state of man.  However, after experiencing what life in a peaceful, free, and prosperous society would be like over the weekend, it’s depressing to go back to work for the progressive, welfare-warfare corporate state that sucks half your wages away by taxes and inflation leaves you with little to show for it after half of lifetime of hard work.  So, yes, the folks got tired but Trump’s energetic finale revived them into yet another frenzy, whereupon Trump was mobbed like a rock star for autographs.

Last summer, on my Facebook page, I picked four candidates out of 17 to be the finalists for the GOP nomination.  Three of them were Trump, Cruz and Kasich.  A few days ago, I made my November pick.  Leaving aside the minor parties as the system is rigged against them too, Trump 52; Hillary 48.  Call it the defeat of the elite.