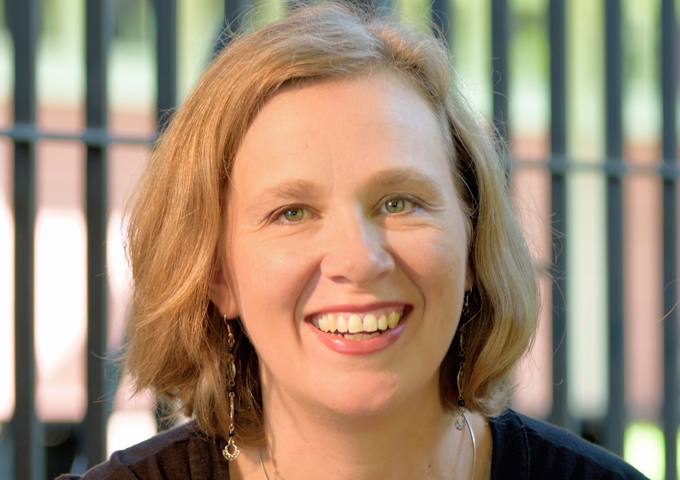 Amy Williams, a Buffalo native and video artist Aaron Henderson, two acclaimed Pittsburgh-based artists, have been working for over a year on this collaboration, which is the culminating project for Williams’ year as a prestigious Guggenheim Fellow.

The Peter & Elizabeth C. Tower Auditorium of the Burchfield Penny Art Center, on the Buffalo State College Campus, will host the world premiere of a collaborative work by the pianist and composer Amy Williams and the video artist Aaron Henderson, on Sunday May 1 at 2pm.

Amy Williams, a Buffalo native and video artist Aaron Henderson, two acclaimed Pittsburgh-based artists, have been working for over a year on this collaboration, which is the culminating project for Williams’ year as a prestigious Guggenheim Fellow. Williams invented the word ‘cineshape’, back in 2003 when she wrote the first piece in the series, and it refers to musical compositions that draw structural inspiration from films. The innovative, collaborative performance will feature five compositions by Williams, each inspired by an existing film, and five new video pieces by Henderson, inspired by her original music.

The source films for the compositions by Williams are eclectic: Chunhyang, a 2000 Korean period film about thwarted love, and Time Code, a film from the same year by the English director Mike Figgis which splits the screen into four parts to simultaneously tell two different stories. Williams also draws inspiration from a pair of German films: The Lives of Others, a 2006 Academy Award winning film about an East German Stasi agent who becomes increasingly absorbed by the lives of a writer and his lover, who he has under surveillance, and the 1998 film Run Lola Run, which is discussed below. Rounding out the quintet of films is Rope, Alfred Hitchcock’s 1948 treatment of the notorious Leopold-Loeb thrill murder case, which takes place in real time and is edited to appear as a single, continuous shot through the use of long takes.

The audience at the ‘Musical Feast’ concert in the Burchfield Penny this past February, had the opportunity to experience what was, in effect, in movie terms, a ‘trailer’ for Cineshape, when Williams performed one of the works’ five movements, “Cineshape 4”, composed in 2015 for solo piano and video. “This piece borrows structural elements from the German film ‘Run Lola Run’, said Williams. “This film is divided into three episodes; Lola repeats the same day three times, starting in exactly the same way, but each time hoping that a slight modification of her actions will save the life of her boyfriend. This simple concept, that there are numerous ways to develop a particular idea and that minor choices have serious consequence, leads to a multifaceted structure. The three sections of the piano piece, each lasting approximately four minutes, can be performed in any order, predetermined by the performer and played without pause. Each episode must be perceived as convincingly reaching its inevitable conclusion, despite the three different results. Much like the film, the piece is a high-paced, energetic tour-de-force, literally running from start to finish with only occasional moments to stop and take a breath”. Having greatly enjoyed ‘Run Lola Run’ on its initial release, and in a couple of subsequent re-viewings on DVD, I am happy to report that Williams’ new musical composition, along with Henderson’s entirely new video treatment of her music, successfully capture the marvelous, cyclical nervous energy of the film, while not incorporating a single musical motif, or visual image from it.

Along with live video processing, Cineshape will be performed by a dream team of contemporary music experts, including the members of the JACK Quartet, who have been frequent guests, both at UB, and at the June in Buffalo Festival, where they have displayed the chops that have earned them the rare right to be mentioned in the same category of cutting-edge repertoire and performance as the legendary Arditti Quartet. The other performers are flutist Lindsey Goodman, who was impressive in her Buffalo debut at “A Musical Feast” concert this past February, and percussionist Scott Christian, along with the composer herself at the piano.

Admission to this event is free. Information: www.burchfieldpenney.org

Executive director Lauren Radnofsky , who is co-artistic director, along with conductor Brad Lubman, of Ensemble Signal are well-known to the Buffalo area audience for new and contemporary music, having performed on numerous occasions at UB, both on the Slee Visiting Artists Series, and as part of the annual June in Buffalo New Music Festival, since the group’s debut in 2008. But, for the first time, the UB Creative Arts Initiative has scheduled an ambitious slate of performances and educational activities by Ensemble Signal to take place all over the Buffalo community during their upcoming residency.

One of the highlights of their residency is the opening event on Sunday May 1, at 3pm, a community concert at the Concerned Ecumenical Ministry, 286 Lafayette Avenue. Ensemble Signal teams up with UB students and faculty to perform drumming of all kinds, on bongos, cello and even flower pots, in works by composers including Steve Reich and David Lang. This event, which is free and open to the public, is co-presented by UB’s Creative Arts Initiative and Buffalo String Works, a non-profit, after-school music program which serves refugee and immigrant families, primarily on the underserved Lower West Side of Buffalo.

The final event takes place at 7:30pm on Thursday May 5 in Slee Hall on the UB Amherst Campus. Billed as a Steve Reich Celebration,  the centerpiece of Ensemble Signal’s residency features a program that highlights over 40 years of Reich’s pioneering work ranging from Clapping Music (1972) to Radio Rewrite (2012, based on songs of Radiohead). While this event is free, tickets are required.

Ticket information and a complete schedule of events at:  www.buffalo.edu/cai