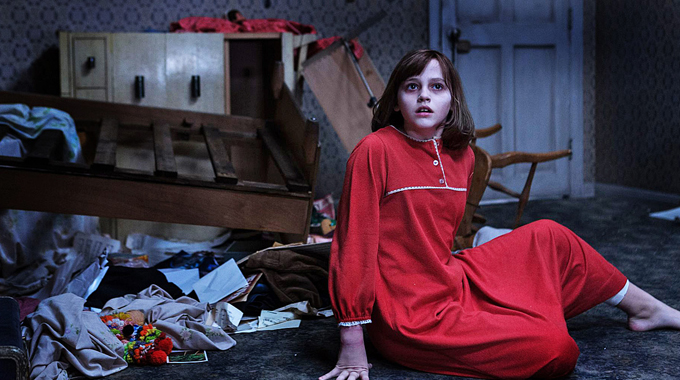 James Wan’s 2013 horror movie “The Conjuring” did a lot better than expected, and “The Conjuring 2,” opening this week at your nearest multiplex, is the result.

It hasn’t been a particularly good year for sequels, but James Wan’s 2013 horror movie “The Conjuring” did a lot better than expected, and “The Conjuring 2,” opening this week at your nearest multiplex, is the result.

And it’s really good. In case you missed the first installment, Patrick Wilson and Vera Farmiga play real life ghostbusters Ed and Lorraine Warren, who first gained fame with their investigation of the so-called “Amityville Horror.”

Like the first film, the story has been taken from the Warren’s case files. This time, the paranormal research takes place outside of London, where an 11-year-old girl played by Madison Wolfe is being possessed by – Evil spirits? The Devil himself? Who knows?

Whoever it is says it’s his house and he wants her, her single mom and three brothers and sisters gone. In a nice twist, when we finally get to see the demon, it’s something first encountered by Lorraine Warren back at the Amityville Horror house on Long Island.

Because the Warrens are devout Catholics, the demon’s identity is problematic. Is it simply luring the Warrens from place to place on ghostbusting missions to test their faith?

Some have already criticized “The Conjuring 2” for its’ acceptance of the Warren’s version of the real-life story. Was the girl really possessed, or was she victimized by a pair of American con artists looking to profit from her plight?

The actual case, known as the Enfield Haunting, remains the most famous ghost story in British history even today, and much of the criticism of the film is coming from across the pond, where many believe the whole thing was a hoax.

But seriously, since when do horror movies have to be true?

The film is set in the 1970s, which was a gamble on the part of Wan because it calls to mind one of the scariest movies ever made, 1973’s “The Exorcist.” The possessed little girl levitating, talking in a scary devil voice and making furniture fly around the room was done to perfection 43 years ago.

Such comparisons are perhaps unfair. Films of every genre get made over and over again. Still, it’s almost impossible not to think about “The Exorcist” while watching “The Conjuring 2.”

But Wan’s style, the chemistry between Wilson and Farmiga, and the approach to using every shock value device in the book combine to scare the bejesus out of the audience. The soundtrack itself is a work of art, both for its music, by Joseph Bishara, and excellent use of such seemingly time worn tricks as the still silence suddenly shattered by a hugely amplified door knocker shows they can still work.

In addition to “The Conjuring,” Wan is also responsible for the horror masterpieces “Insidious” and “Saw,” so his credentials are solid. Whether or not you’ll like “The Conjuring 2” pretty much depends on whether you like horror movies.

It’s not going to win any Academy Awards, but it delivers the frightening goods with style to spare.