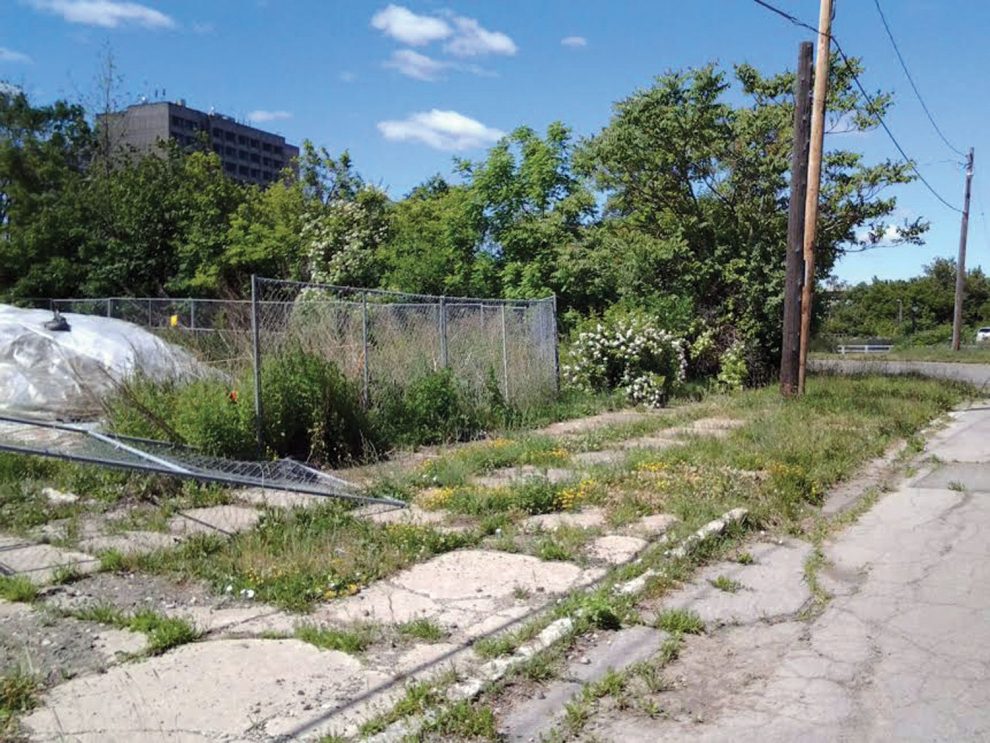 NIAGARA FALLS, NY – A spoils pile – which has signs posted around it warning that it is radioactive — at 915 North Ave. — the past site of a Niagara University bar once known as McQ’s, has been left abandoned and open to public access.

The security gate on the chain link fence around the site has been bowled-over allowing unrestricted access by the public and the sheet-plastic covering has blown off in places and is ripped in others allowing the hazardous materials in this waste to be carried away by rain and blown by winds into the open windows of the densely populated neighborhood which includes The Colt Block Apartments and Wrobel Towers at the corners of Main Street and Ontario Avenue.

The brand new $44 million train station sits about 75 feet from the radioactive pile which has several yellow lawn-style signs around its perimeter which read “Caution Radioactive Materials Area.”

How long the radioactive pile has been located at this site is unclear as of press time but it is evident that it has been neglected for months, if not years.

Google street-view maps from 2007 show waste roll-off containers on this weed-strewn property, which lies only 100 feet from the sidewalks of Main Street and Ontario Avenue.

A 2011 satellite image of the area shows a large white splotch, presumably the white plastic covering that was earlier intact, now sitting in tatters.

The radioactive pile may contain uranium, radium, and/or thorium — if records of similar sites around Niagara Falls and Niagara County are an indicator. The possibility exists that the exposed site may also contain plutonium, called by some scientists as “one of the most toxic substances known to mankind.”

All of these radiological materials were handled, enhanced, manipulated or otherwise produced in Niagara Falls in the chemistry labs and metallurgical furnaces powered by Niagara’s abundant electricity. Many of these elements were subsequently buried locally, including direct-to-soils burials.

Nearly all recently discovered waste sites around Niagara Falls have been dubbed, “filled with slag,” which is a catch-All term for waste material which contains radioactive materials.

Without laboratory analysis, public oversight and split laboratory sampling, it may be impossible to know the true danger of the pile on North Ave. since not every metallic smelting operation produced the same kind of waste materials or waste-stream.

A large quantity of atomic age, nuclear slag was also buried underground along nearby Lewiston Road and was unearthed during the road reconstruction project completed in August 2013.

According to city officials and state records, all radioactive slag from the Lewiston Road reconstruction project (2009-2013) — where a lawsuit emerged over the quantity of radioactive materials buried under the road — were removed and sent to an out-of-state and licensed landfill where they are to be stored radioactively “hot” for 100’s of generations.

The location for this pile of radioactive waste raises additional questions.

Niagara Falls has been without a city engineer for years. The last one, Jeffrey Skurka, was fired while the Lewiston Road project was ongoing and just prior the commencement of the train station project.

What, if any environmental laws have been broken since Skurka’s firing?

Skurka was fired because he raised safety concerns on Lewiston Road and elsewhere. Would this radioactive material have been permitted to lie haphazardly and unprotected on North St. if there had been a city engineer?

Skurka is suing the City of Niagara Falls for unjust termination.

HOW RADIOACTIVE MATERIAL CAME TO BE BURIED

Back in the 1940’s and 1950’s, Niagara Falls was the premier city for experimentation, research, development and production of atomic bomb materials (i.e. radioactive) throughout the Manhattan Project and into The Atomic Energy Commission (predecessor of the Nuclear Regulatory Commission) eras.

According to U.S. Department of Energy records, Niagara Falls industry during that period was the largest production center for uranium metal-from-ore in the nation.

The production of these materials created nuclear wastes which needed special licensing, handling and disposal. Regulations were lax then.  Consequently, Niagara’s nuclear waste was disposed of in a variety of ways including burying it under roads under the theory that submerged under gravel and blacktop the radioactive wastes would be harmless to residents

That theory has been proven over time to be flawed. Radioactive waste emanations have been demonstrated to penetrate through road materials and some believe that for decades people took a dose of radiation right through the bottom of their cars every time they drove down Lewiston Road.

In the meantime, the spoils pile on North Ave. – which was probably buried for decades – under either Lewiston Rd. or at the train station site – is now no longer buried.

A Geiger counter reading taken by the Reporter at the exposed site showed the pile exceeded natural background radiation rates by orders of magnitude, or by at least 1000 times what should be considered natural for any area.

While how serious a health hazard it represents to nearby residents will not be known without testing, the U.S.E.P.A. warns that “all exposures to ionizing radiation carry a risk for inducing an associated disease,” and, that there’s “no such thing as a “safe dose,”  however small.

Regardless of the depth of danger, this exposed radioactive pile should be removed to a state and federally licensed radioactive waste storage facility as soon as possible.

For now this “biologically hazardous” pile, most likely made radioactive as part of the atomic age and Niagara Falls’ role in it, then buried underground, sits amid the people of Niagara Falls.

Residents are advised to stay clear of the pile.

The 50th Anniversary of the Freedom of Information Act?
Mascia Off the Ballot, but BMHA Controversy Continues
Comment