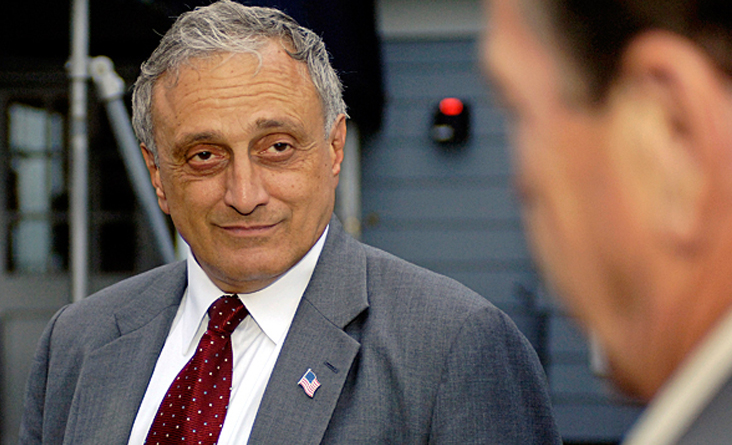 Tonawanda Town Attorney John Flynn, who is the endorsed Democratic, Conservative, and Working Families candidate for Erie County district attorney, picked up the support of the Buffalo Police Benevolent Association this week, building on the momentum from last week’ financial filings that showed he has raised $188,056 since early April while Acting DA Mike Flaherty raised only $21,478 during roughly the same period.

“They [Flaherty campaign] are on life support,” Flynn said during an interview this week, adding that he has nine more fundraisers planned before the Sept. 13 primary when he will face Flaherty and longshot Mark Sacha for the Democratic line and Joe Treanor for the Conservative line in November.  Treanor is also the endorsed Republican candidate but Flaherty needs to win the Democratic primary to stay alive for November.

Flaherty had slightly more than $300,000 in his war chest back in January, but last Friday’s filing showed $248,487 on hand after expenses–including the $21,478 he raised during the period—while Flynn has $151,622 on hand after expenses totaling $36,466.   A lot of the money Flaherty has in the bank comes from loans from supporters, friends, and family members and would have to be paid back, win or lose.  He’s also raised money from members of his staff at the district attorney’s office.

Meanwhile, Flynn has received significant support from the criminal defense bar and has gained momentum from his fundraising success and the strong support from the legal community outside the district attorney’s office.  Flaherty, while he has made numerous changes, is still battling the image problems that plagued his former boss, Frank Sedita III, who had fallen out of political favor at Democratic headquarters even though he was cross-endorsed for State Supreme Court.

Flynn also filed more than 14,000 designating petitions, most certainly aided by Democratic headquarters, while Flaherty was forced to collect them on his own, filing slightly more than 4,000, and that probably accounted for much is his spending during the period.  Sacha managed about 3,000 signatures and had about $14,000 in the bank.  Treanor has said he will self-finance his campaign and showed very little.

“I’m very confident, we’re moving in the right direction,” said Flynn this week, the day after he received the endorsement of the Buffalo PBA.  “Every day I’m more and more encouraged by what I’m seeing and hearing.”

PBA President Kevin Kennedy said Flynn was endorsed after a very thorough vetting process, saying at a news conference “our members are soundly and unanimously behind Mr. Flynn’s campaign and hope that the voters in this area feel the same way that we do, that it’s time for a change.”

Top Flaherty campaign aide Jim Eagan had a much different take on the PBA endorsement, saying “it doesn’t represent the rank and file,” adding that officers in the department are overwhelmingly pleased with Flaherty and what he’s accomplished and the changes he’s made, like the creation of the office’s first public integrity unit and community outreach efforts.

Eagan said the endorsement was made “by a handful of people with ties to the Democratic Party,” insisting that Flaherty’s 22 years of experience as a prosecutor makes him the best candidate to hold the office and that he’s completely independent of the party bosses.

Flynn, on the other hand, is proud of his military service where he still serves as a litigation attorney in the Naval Reserve, and his record as a Tonawanda town judge and assistant district attorney.  He also served briefly as an acting Buffalo City Court judge.

Flynn has built his campaign around the message that within law enforcement there has been “a crisis of confidence” in the Erie County district attorney’s office, claiming that politics and personal considerations have interfered with decision-making, and that he would change that if he is elected district attorney.   Expect Flynn and Flaherty to invest heavily in television advertising later next month leading up to the primary vote Sept. 13th.

The big surprise in last week’s financial filings for the 60th District State Senate race is not the $450,000 filed by Republican-Conservative-endorsed Chris Jacobs including a $200,000 personal loan, but the more than $100,000 on the books for the Democratic-endorsed candidate, Amber Small, a relative political newcomer who is hoping to keep the seat now occupied by outgoing Marc Panepinto on the Democratic side of the aisle.

Small, executive director of the Parkside Community Association, dared to tread where no other Democrat would venture, willing to take on County Clerk Chris Jacobs, a member of the billionaire Delaware North family, when more experienced Democrats took a pass even though Democrats enjoy a significant enrollment edge in the district that stretches from Grand Island down through Erie County to Cattaraugus County.

Small’s war chest includes a $24,000 loan she made to her campaign, and another $24,500 in contributions, pale by comparison to the Jacobs’ numbers but nonetheless impressive for a first-time candidate taking on a very wealthy opponent in a race Republicans need to win to help protect their majority, luring the well-heeled Jacobs to the task.

She says the strong support she is receiving in the district is a sign that voters are rejecting the Trump-style campaign rhetoric and want a senator “who is an advocate for reforming the corruption in Albany, and focused on social, economic, and environmental justice.”

Veteran Buffalo lawmaker Al Coppola, who is running in the Democratic primary, raised $163, while Republican Kevin Stocker showed about $1,000 in his war chest as he prepares to take on Jacobs in the GOP primary.

Now Small may be the longest of long shots in the race against the likely winner of that GOP primary, Chris Jacobs, but she is certainly turning heads with her grassroots campaign and strong support among women.  The $100,000 in the bank certainly shows she’s not just in it for the show, she wants to win it.  Jacobs, seemingly invincible not long ago when better-known Democrats took to the hills after Panepinto bowed out, must certainly be taking notice that Small is serious about her run.  You can be sure that’s the last thing he wanted.

The big political news this week, of course, was the nomination of New York billionaire Don

ald Trump as the Republican nominee for president at the GOP convention in Cleveland.

Prominent among the Trump supporters is Buffalo developer Carl Paladino, front and center in front of the podium at the head of the New York convention delegation and the leader of Trump’s campaign in the Empire State, meaning Carl will be traveling across the state trying to help Trump somehow win New York’s electoral votes over presumptive Democratic nominee Hillary Clinton.

Now anyone who knows Carl knows that when he’s into something, there’s no holding back.  Whether it is fighting for what he believes is best for Buffalo’s children as a member of the Buffalo school board, or fighting corruption in government, Paladino is all in.  That mentality will certainly serve the Trump team well, even though Carl knows that, at times, he will have to check his sometimes all-or-nothing style at the door and help Trump cultivate an image that will attract voters who may be on the fence about his candidacy, especially women.  We reached out to Paladino this week, as the states were voting on the nominee, to give us some of what he was thinking as it was unfolding before him.  He took a moment to send the following message:

“We are watching history being made.  It’s the second American Revolution.  The American people will take back their government from the elitist, aristocratic, bureaucratic phones in the Washington establishment.”

Now that’s the Carl Paladino that we know, blunt, outspoken, and hard-hitting.  I’m sure Trump is very glad that Carl is in his corner.