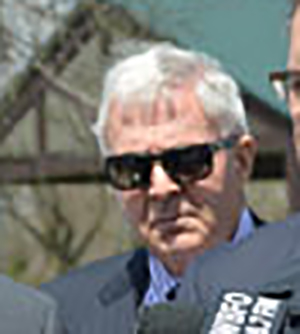 Former Assistant US Attorney Anthony Bruce led the charge to indict Frank Parlato last year. In so doing he may have committed perjury.

In the past, Bruce has been accused of suborning perjury and was almost disbarred, according to sources in the legal community, over his dishonest prosecution of the Chosen Few Motorcycle Club in 2011.

In the Parlato case, which may lead to Bruce being disbarred, there appears to be a smoking gun.

Parlato’s lawyers point to a “Letter of Intent” contract dated January, 2008. It is signed by Parlato, but the other party to the contract – Clare and Sara Bronfman – never signed it.

There is reason to believe, based on the reports of witnesses, and documentary evidence, that AUSA Bruce misled the grand jury about this Letter of Intent, allowing the grand jurors to believe it was signed by the Bronfmans –– when Bruce knew it wasn’t.

(Click here to see the Letter of Intent. Note that this is the copy the US Attorney provided and is so stamped. Note also the Bronfmans did not sign it.)

All of this points to one thing: Bruce made his fraud case against Parlato based on a bogus contract – an unsigned Letter of Intent.

Make no mistake: Bruce knew the Letter of Intent was not signed by the Bronfmans.

He knew that neither Parlato nor the Bronfmans were bound to terms of the unexecuted contract.

But there is reason to believe that Bruce blatantly told the grand jury that Parlato was bound to a contract that he was not bound to – a contract that provably did not exist. Based on this non-existent contract, Bruce may have perjured himself or suborned perjury in claiming that Parlato defrauded the Bronfmans when he violated the (bogus) Letter of Intent.

If it’s true, it is shocking Bruce thought he could get away with this.

The government admitted, through a bizarre email written by AUSA Elizabeth Moellering on Sept. 18, 2015, that they believed (or pretended to believe) they had an actual signed [executed] Letter of Intent, but couldn’t find it.

AUSA Moellering wrote to Parlato’s defense lawyer, Brian Feldman, “We are still looking for the fully executed version of the Letter of Intent.”

Feldman wrote back, “Thanks, Elizabeth. If you conclude that there is no executed version of the Letter of Intent, we would appreciate knowing that.”

The government never found it, but indicted Parlato just the same.

There is more than a smattering of evidence that AUSA Bruce used an unsigned Letter of Intent as if it was a signed and enforceable contract – parading that falsehood before the grand jury as the proof of fraud by Parlato against the Bronfmans.

In so doing, Bruce may have committed fraud.

There is little doubt Bruce knew the Letter of Intent was not a contract at all. Parlato’s lawyers told him. Parlato defense lawyer, former US Magistrate Judge Carol Heckman wrote to Bruce on Nov 10, 2015, “The Government claimed to have a contract with the Bronfmans that our client purportedly violated (somehow criminally). However, the Government does  not have such a document, and the Bronfmans themselves have sworn it does not exist.”

Before the indictment, Parlato’s lawyers gave Bruce sworn statements by the Bronfmans made under oath that they never signed the Letter of Intent; that there was no written agreement with Parlato.

That neither Parlato nor they were bound by the Letter of Intent.

According to a local and well respected lawyer, (who may be a witness against Bruce should a proceeding commence against him) Bruce admitted on August 20, 2015 that he was in contact with the Bronfman’s attorney, William Savino of Woods Oviatt of Rochester, and Savino pressed Bruce to include the Bronfmans in the indictment.

There is evidence that the Bronfmans pay fees for indictments of their enemies.
Savino and Bruce are known to have related outside interests.

Savino knew that the Letter of Intent was bogus. He signed a verified complaint for the Bronfmans on April 2, 2012 that there was no written agreement between Parlato and Bronfmans in a civil suit between the parties.

Here is what we know:

The Letter of Intent – which – had it been valid – was the only way to include the Bronfmans in the indictment.

It was never signed and the Bronfman portion of the indictment is as false as perjury.

Everything hidden in the dark and dim proceedings of the secretive grand jury – the  deceitful prosecutors’ playground – will be brought out to the light.

Much more will be revealed on this matter. “We provided so much information to the U.S. Attorney’s Office on so many topics,” Ralph Lorigo told the Buffalo News, expressing surprise at how the government ignored all the documentary exonerating evidence. “I’m very taken aback by what I read in the indictment.” He was both the New York State Attorney General and a US Attorney, making Dennis Vacco probably the most prominent, well known and best qualified prosecutor in Western New York.
Vacco went to bat for Parlato, writing a comprehensive “White Paper” which Vacco put his name to and which clearly showed he believed Parlato was innocent and that the government wrongly asserted theories of criminal liability which included actual mistaken identification of critical documents. These serious mistakes by the government may have spread to the grand jury.

According to the Buffalo News, former Federal Magistrate Judge Carol Heckman wrote to AUSA Bruce that she “uncovered new evidence that exonerates Parlato. In subsequent letters, she said the evidence would prove that neither Reger nor the Bronfmans were victimized by her client.”