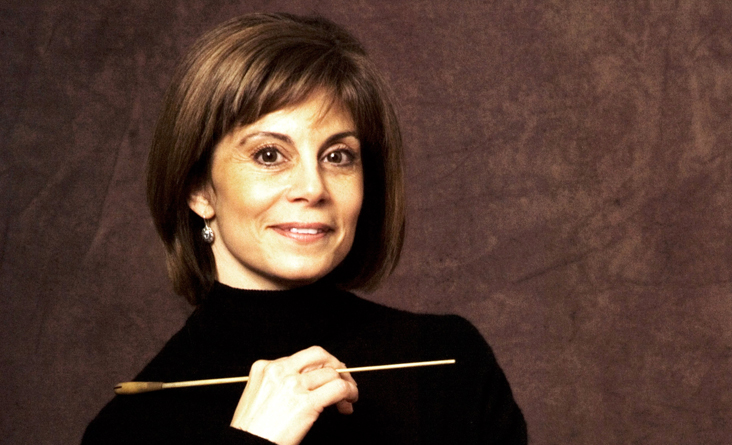 By any reckoning, the Buffalo Philharmonic Orchestra concerts in Kleinhans Music Hall this Saturday evening at 8pm and Sunday afternoon at 2:30pm are very special events. BPO music director JoAnn Falletta will be on the podium to lead the orchestra and the members of the Buffalo Philharmonic Chorus, under the leadership of their music director Adam Luebke, in performances of Johannes Brahms’ unique masterpiece Ein deutsches Requiem (A German Requiem) with soloists Darren Stokes, baritone, a frequent and welcome guest artist, and Deborah Selig, soprano.

The full title of the work, Ein deutsches Requiem, nach Worten der heiligen Schrift (A German Requiem, to Words of the Holy Scriptures) gives us one of the keys to understanding its significance. In the Catholic Church, a Requiem Mass is “offered for the repose of the soul or souls of one or more deceased persons, using a particular form of the Roman Missal. It is frequently, but not necessarily, celebrated in the context of a funeral”. Similarly, musical settings of the Requiem Mass are also called Requiems, and there have been at least tens of dozens of musical settings, if not many more, of the Requiem Mass, with some of the very greatest and best known by Mozart, Berlioz and Verdi.

Instead of setting the traditional liturgical Latin Requiem text, Brahms, who was raised as a Lutheran, but who was not a conventional believer and resisted dogmas, assembled his own compilation of texts from the Luther Bible, using selections from both the Old and New Testaments and the Apocrypha. As Brahms wrote in a letter to the organist of the Bremen Cathedral before the first performance of the initial, six movement version in 1867 (a seventh movement was added later) “I will admit that I could happily omit the ‘German’ and simply say ‘Human’”.  By using the word ‘human’ Brahms indicates that in choosing the texts for his work he was primarily focused on the idea of comforting the living, not on the spiritual destiny of the souls of the departed.

With this in mind, it seemed somehow very appropriate to every classical musical lover in the world that after the national tragedy of 9/11 Kurt Masur, the then music director of the New York Philharmonic Orchestra, decided to perform Brahms’ German Requiem as a memorial to the thousands of victims of that terrorist outrage. What the NY Times called “his finest hour, and a gift to the city,” came on Sept. 20, 2001, in a nationally televised memorial to the victims of the Sept. 11 attacks.

Although he never admitted it, even to his closest friends, like Clara Schumann and Joseph Joachim, Brahms was moved by the recent death of his mother, with whom he was very close, to complete his German Requiem. In composing the work, he was also undoubtedly responding to the tragic death in 1856 of his friend and mentor Robert Schumann. Critical reception of the work was at first mixed, splitting at least in part along religious fault lines. In Catholic Vienna, the first performance (of the first three movements only) met with some vigorous opposition, exacerbated by the mistake of the timpanist who misread a musical notation to play soft, playing very loud instead, drowning out the chorus. In the largely Protestant cities of northern Germany the public reception was far more favorable, even if some religious figures questioned the choice of texts. Eventually, however, it wasn’t long before the German Requiem was recognized as being Brahms’ first great masterpiece throughout Europe and North America.

Brahms also had a lifelong interest in Hungarian music, so in a very appropriate bit of programming, JoAnn Falletta will also lead the orchestra in two colorful orchestral works from the 1930’s by Zoltan Kodaly, Dances of Marosszék and The Peacock (Variations on a Hungarian Folksong) which have become BPO signature pieces.

On Thursday February 23 at 7:30pm, UB faculty members Jonathan Golove, cello, who was just elected Department of Music Chairman, and Eric Huebner, piano, along with adjunct faculty member Hanna Hurwitz, violin, will present an evening of European music composed around the year 1920 in Baird Recital Hall,

Although Stravinsky, helped by the great Russian cellist Gregor Piatigorsky, only assembled the cello and piano version of his Suite Italienne in 1932, all the musical material came from his highly successful ballet Pulcinella which had its debut in Paris, with choreography by Massine, décor and costumes by Picasso, in 1920.

Ravel composed his Sonata for Violin and Cello after a period of physical and emotional recovery from his service in World War I, including his own bout of disabling dysentery, and the death of his mother. He considered the work to be a turning point, saying that “the music is stripped down to the bone. The allure of harmony is rejected and increasingly there is a return of emphasis on melody”.

Early in his career, Kurt Weill composed his only three chamber works: two string quartets and his 1920 Sonata for Cello and Piano, an intensely chromatic work, but one with a strongly rhythmic and metrical structure. Introspective in mood, the sonata has some highly imaginative lighter touches. The student piece has a considerable variety of color, and the finale’s initial grotesque character gives way to a tranquil, impressionistic coda, that some have likened to a calm sunset after a stormy day. It’s a safe bet that the performance of Weil’s work will be an area premiere.