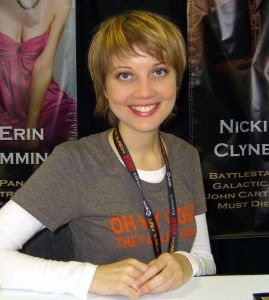 Actress ended career when she got close to Keith Raniere

She joined NXIVM around 2006, having been recruited in Vancouver. She would fly back and forth to Albany to take Intensives. Evidently, she was encouraged to quit acting by Keith Raniere and work for the higher cause of NXIVM’s mission: to create a more noble civilization.

In 2008, although she was under contract and at the height of her popularity from her recurring role in the series, she asked the producers of Battlestar Galatica to let her out of her contract. They agreed and, in an episode, her character was killed off.

She moved to Clifton Park and became a full time follower of Mr. Raniere. She began to work for Clare Bronfman and The Knife Media where she reportedly earns $15 per hour.

There is a rumor that she married Allison Mack in order to remain in the United States legally.  Ms. Clyne was active in promoting DOS and the branding and blackmail scheme it entails.

Allison Mack also gave up her role in Smallville at the height of her popularity. She became a full time follower of Keith Raniere. She too was active in DOS and her initials along with Mr. Raniere’s have been branded on women in DOS.

Grace Park, another actress who joined NXIVM around 2008, may still be a member. This year she quit her supporting role in Hawaii Five-O at the height of her popularity. Ms. Park claims she quit because she was not being paid as much as the stars of the show and that it had nothing to do with the influence of Keith Raniere.

Some who attended an introductory session of Executive Success Programs in Vancouver, attended by Nancy Salzman, ca. 2008, recall a demonstration of the Exploration of Meaning therapy. A volunteer was asked for from among the attendees and Ms. Park was chosen. She was the demo of the EM therapy and was subjected to the hypnotic therapy of Ms. Salzman. Ms. Park under therapy spoke of her acting career and other matters.

Kristin Kreuk was another actress in NXIVM. She left quietly sometime around late 2011 or 2012, according to sources. She continues in her acting career.

Hollywood Life and The Hollywood Gossip and other media have reported that Kristin Kreuk recruited Allison Mack into NXIVM.

Some people think it is unfair that Kristin is being named in any story. Yet, for years, she promoted Keith and gave him credibility.  And her name was often used to offset any negative publicity that came his way.

To discount media reports about Keith Raniere’s alleged villainy, recruiters would often say to those they hoped to recruit, “If Keith was so bad, why would a TV star like Kristin Kreuk be part of this? Do you think she would risk her reputation if this was bad? Come to an Intensive. Kristin will be there as a coach.”

This year, Kristin has condemned Harvey Weinstein, and talks about making films about tough women who withstood the abuse of men or institutions.  She wants to star in big stories about brave women who spoke up to save others from suffering.

As a famous actress who left NXIVM, her voice today would go a long way to protect others from being abused. She has not yet responded to requests for comments about her role in NXIVM.

The man who recruited Kristin is actor Mark Hildreth. He left NXIVM in 2017 after, reportedly, some eye opening experiences he saw first hand concerning Mr. Raniere and the practices of DOS. To some observers, his silence is anything but heroic.