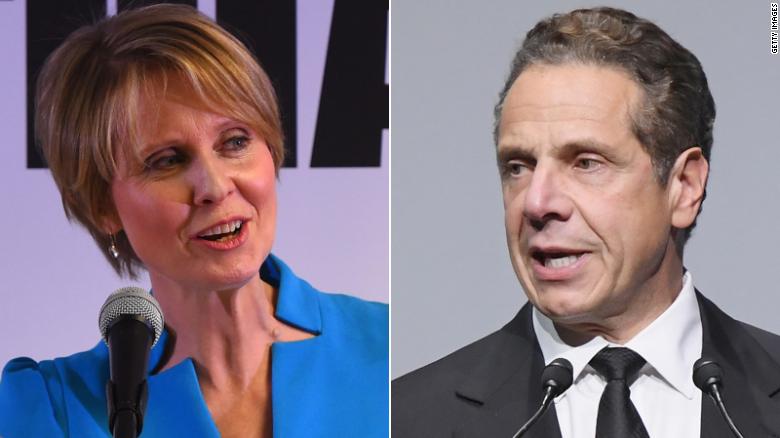 NEW YORK, NY – Candidate for governor Cynthia Nixon condemned Democratic Governor Andrew Cuomo today – reducing his two terms in office to 25 words:  “If you’ve set your own house on fire and watched it burn for eight years, finally turning on a hose doesn’t make you a hero.”

The following was sent to Artvoice from her campaign:

Cuomo “Actively Encouraged” A Group of Democratic State Senators To Caucus With Republicans to Give Them the Majority. Cuomo was “deeply involved” in the formation of the Independent Democratic Caucus (IDC), a group that formed “almost precisely” at the beginning of his first term, and has caucused with Republicans since 2012, preventing Democrats from controlling the chamber in spite of their numerical majority. [Politico, 9/2/14; New York Times, 8/9/17; New York Times, 11/15/17; Politico, 12/2/16]

Cuomo Refused To Call Two Special Elections, Allowing “GOP [To Keep] Control In NY Budget Talks.” Democrats “urged Cuomo to quickly call the elections to give their party a chance at regaining control of the Legislature’s upper chamber before the state decides on a spending plan that will exceed $160 billion.” Cuomo refused those calls, which meant “Republicans will maintain control of the Senate during state budget negotiations… If Democrats take both open seats, there would be a numerical majority of elected Democrats in the chamber.” [Democrat & Chronicle, 1/22/18]

Cuomo Led “Backroom Deal” to “Bolster Power” of the GOP Senate Majority By Approving Its Partisan Redistricting Maps. In what observers called a “total cave,” a “huge flip” and and a “horrible process,” Cuomo made a deal to approve election lines drawn by the Republican senate majority that “government watchdog groups say are gerrymandered to protect incumbents and that some minorities say are unfair to black and Latino New Yorkers.” [New York Times, 3/15/12; Associated Press, 3/15/12]

Cuomo Often Aids Republicans In Races Against Democrats. In 2016, Cuomo declined to endorse two Democrats in “competitive” races with Republicans, including a Buffalo Democrat involved in a competitive race for an open state Senate seat that “would [have given] the GOP absolute control of the chamber”; both lost. In 2015, Cuomo endorsed Republican Joanie Mahoney for Onondaga County Executive. The same year he declined to endorse a Hudson Valley Democrat in a “hotly contested” race that could “determine if Republicans retain their tenuous control of the state Senate.” In 2012, Cuomo refused to assist Democrat Cecilia Tkaczyc win a competitive Senate district, and even remained quiet while her opponent used his image in campaign materials to bolster his case against the Democrat.  [Politico, 12/2/16; New York Times, 10/9/14; Syracuse Post-Standard, 10/28/15; Daily News 11/6/16; City & State, 10/11/16; Times Herald-Record, 10/29/16; Times Union, 11/4/12]

Cuomo Boasted To Republicans About How Little He Campaigned For A Democratic State Senate & Never Headlined A Fundraiser For Democratic Senators In His First 6 Years In Office. The New York Times reported that during his first six years in office, Cuomo “never headlined a fund-raiser for the campaign committee for the Senate Democrats.” In 2017, Cuomo told Senate Republicans “he could have done a lot more to help his own party gain control of the chamber [in 2016], but didn’t,” and even pointed to how little of his $19 million war chest was spent in the effort. The New York Times described Cuomo’s campaigning for Democrats in 2014 as “scant.” [New York State Of Politics, 1/17/17; New Republic, 7/17/17; New York Times, 10/24/16]

...And His Top Staff Positions are Loaded with GOP Operatives

GOP Operatives Are Among His Top Advisors & Have Held Positions Like Chief of Staff, Deputy Chief of Staff, Budget Director, & Senior Advisor. In 2017, Cuomo hired Maria Comella, a top aide to Chris Christie and other Republicans, to be his chief of staff responsible for “helping to formulate the governor’s 2017 agenda.” Cuomo has also hired former top aides for the Republican state Senate including Robert Mujica as his budget director and Kelly Cummings as deputy chief of staff and senior advisor. Cuomo has also hired the national Republican political consultant Susan Del Percio to be a taxpayer-funded special advisor in his administration. In late 2016, he also brought in longtime aide to Gov. Pataki, Scott Sandman. [New York Times,4/25/17; New York Times, 3/11/14; Daily News, 12/12/16, Cuomo Press Release, Cuomo Press Release, Daily News 1/12/15]

Cuomo’s Embrace Of Conservatives Has Alienated Many New York Progressives

Cuomo Has Teamed With Controversial Republicans & Protected Them (Even Trump)…

2017: Cuomo Gushed About Republican Nassau County Executive Ed Mangano While He Was “Under Indictment On Federal Corruption Charges,” Praising Him As A “Great County [Executive].” [Daily News, 9/11/17]

Cuomo Forged Political Pact With Chris Christie, Protecting Him on Bridgegate, as Christie Dismissed Cuomo’s GOP Opponent as a “Lost Cause.” While Christie’s political career effectively ended over a traffic scandal that sent two aides to prison, Cuomo (who oversaw the George Washington Bridge with Christie) publicly backed Christie throughout the matter, saying, “I’m sure it is as Governor Christie says it is.” The New York Times reported that Cuomo “carefully avoided criticizing Mr. Christie” over the bridge scandal. Meanwhile Christie, the head of the Republican Governors Association during Cuomo’s reelection, dismissed Cuomo’s GOP opponent as a “lost cause” and refused to send money to his campaign. [Star-Ledger, 12/2/13,New York Times, 1/14/14]

The pair also ganged up to undermine the Obama White House’s plan to contain the Ebola virus, unveiling their own alternative plan in an attempt to nab headlines. According to reports, the Cuomo-Christie plan was criticized by federal officials as “not sensible” and bad for New Yorkers’ health. The plan was also seen as upstaging and blind-siding New York City’s Democratic administration. [New Yorker, 10/28/14; New York Post, 10/26/14; Daily News, 10/25/14]

At the Same Time, He Routinely Personally Attacks Democrats…

Facing Criticism Of His Homelessness Policies, Cuomo Lashed Out At A Democratic Assemblyman By Attacking The Lawmaker’s Father. [Wall Street Journal, 8/15/16]

…Leading Progressives to Revolt Against Him…

In The 2014 Democratic Primary, Cuomo Performed “Far Below Normal” Against A Progressive Candidate “With Little Electoral Experience [Or] Campaign Funds.” Cuomo’s primary performance suggested voters who knew him best “[had] major reservations.” He won just under 63 percent of the vote, winning only half of his state’s 62 counties. [FiveThirtyEight, 9/10/14; Politico, 11/19/14, Politico, 9/10/14]

New York Times: Democrats Supported Cuomo’s Primary Opponent Because On “Nuts-and-Bolts Issues Like Budgets And Taxes [He] Has Leaned More Toward The Right” And They Were Frustrated By His “Carefully Calibrated Way Of Governing” [New York Times, 9/10/14]

Politico Headline: “Cuomo Drew Less Support Than Any Governor In The U.S.” According to Politico, in the 2014 general election, Cuomo won “with the support of a smaller percentage of his state’s residents than any other governor in the country. [Politico, 11/19/14]

Cuomo “Drastically [Cut] Funds To Schools And Communities – Cuts That Were Far Deeper Than Needed To Balance The Budget.” [New York Times, Column, 5/31/11]

Cuomo Pushed To “Broadly Limit Retirement Benefits” And Restrict Pension Benefits. According to the New York Times, “Cuomo’s proposal would still cause significant changes to worker retirement plans” and “benefits for law enforcement officers and firefighters…would also be scaled back.” [New York Times, 6/8/11]

Wall Street Journal: In 2016, Cuomo Pursued “Several High-Profile Proposals…That Months Ago He Opposed Or Dismissed As Unworkable.” For instance, Cuomo claimed victory for pushing a paid family leave bill that he previously refused to pursue by claiming the legislature lacked the “appetite” to pass. [Wall Street Journal, 2/28/16]

…But If You Read The Fine Print, They’re Often Not As Advertised

Cuomo’s “Free” College Tuition Policy “[Left] A Lot Of People Out,” Was “Not For Poor Families,” And Did Not Cover The Expenses That Were “Keeping Many Poor Students Out Of College.” [New York Times, Editorial,4/14/17; New York Times, Column, 4/14/17]

Cuomo’s Minimum Wage Increase Was The “Result Of Several Compromises,” Did Not Apply To The Entire State, And Would Not Reach $15 In Some Areas For Six Years. And Cuomo only pursued his watered-down minimum wage policy months after dismissing “a proposal for a $13 minimum wage in New York City as a ‘non-starter.” [North Country Public Radio, 4/4/16;Wall Street Journal, 2/28/16]

While Cuomo Celebrated Passing “Raise The Age” Policy, His Allies Blocked It For Years, And Democrats Said The Reform Was Watered-Down And Did Not Go “Far Enough.” [Daily News, Column, 3/29/17; New York Times, 4/10/17]

Cuomo Made “Bold Statements” About Curbing Negative Effects Of Hydro-Fracking, Then Invested Millions In Developing Fracking Infrastructure. After he refused to weigh in on the controversial gas-drilling procedure, the state finally announced a ban after tremendous political pressure (and a surprisingly close 2014 primary). But the Center for Public Integrity reported that Cuomo’s fracking “ban is less than absolute” and that New York has started to process massive amounts of fracked natural gas. Of Cuomo’s move to claim victory on a fracking ban only to proceed with a massive gas processing program, a Cornell University engineer said, “I’m using the polite word ‘irony…I could also use the impolite word ‘hypocrisy.’” [Center for Public Integrity, 12/11/17]

One Thing Is Consistent With His “Progressive” Policies: They Are “Engineered” For Headlines

City & State Headline: “Critics Charge Cuomo With Rushing Gun Bill To Beat Obama.” Editorials pounced on Cuomo for bending procedural rules and bypassing hearings to quickly pass a gun control bill so he could get one done before President Obama, and trumpet himself as the national leader on the issue — but the hastily drafted bill contained several “basic flaws” that Cuomo acknowledged needed to be fixed. [City & State, 1/16/13; Daily News, Opinion, 1/2313]

Cuomo Supported Gay Marriage When Wealthy GOP Donors In His State Were Pushing the Issue, And Then Used The Policy As A Platform For National Publicity. [New York Times, 5/13/11; New York Times, 10/27/11]

Remember His Own Words…

“Look at the way we’ve managed this state, we’ve managed it in a way that any Republican would be proud.” — Andrew M. Cuomo [NY State of Politics, 10/1/14]