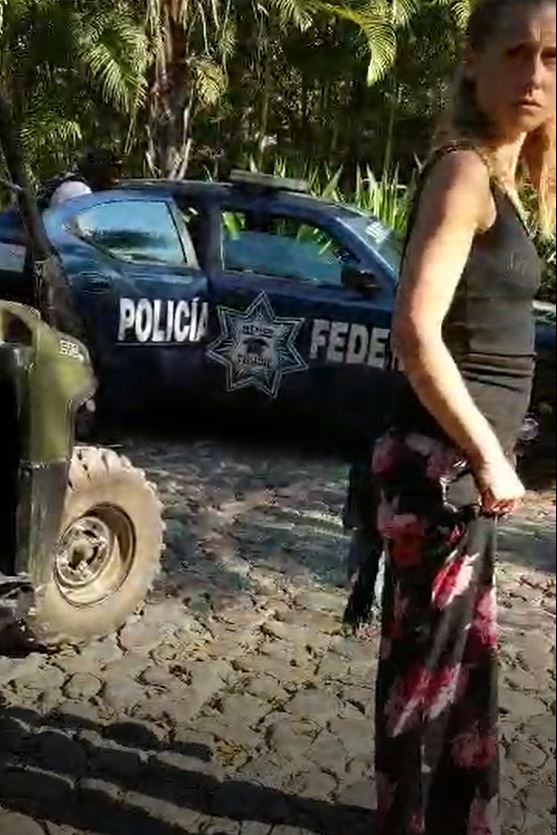 Actress Allison Mack – who played Chloe Sullivan in the long running TV show Smallville – is facing imminent arrest, according to multiple sources with knowledge about the FBI probe of NXIVM. With the arrest of cult leader, Keith Raniere, Mack has assumed top position of the cult’s slave group.

Before cult leader Raniere’s arrest on March 25, Mack surpassed longtime harem members and assumed the role of the late Pamela Cafritz as chief procurer of women.  Cafritz died in 2016, purportedly of renal cancer. She was the daughter of Washington DC socialites Bill and Buffy Cafritz.

It was Cafritz’s bank account that Raniere used after she died. There was $8 million on deposit.

From the onset Mack showed initiative inside the cult. As a rising leader of Raniere’s harem, Mack helped create DOS [Dominus Obsequious Sororium] a woman’s group where hot iron branding and collection of blackmail worthy material were used to keep  women from leaving the group.

Not all women in DOS were members of Raniere’s harem.  Some DOS members – even those with Raniere and Mack’s initials branded on their pubic region – were not invited to join Raniere’s harem.  DOS members made “The Vow” of lifetime slavery to Raniere: DOS was intended to be a worldwide organization – a united group of women branded in the name of Raniere and Mack – which was said to be a force for good, and a female force against evil.

DOS members who perform at the highest levels were considered for entry into the harem of Raniere. In this respect, Mack operated similarly to the late Cafritz, who performed a triad role of managing recruitment for the harem, ran Jness, a women’s organization she co-founded with Raniere and supported Raniere’s household.

After Cafritz died, Mack assumed leadership of Jness. Then she formed DOS and lived with or near Raniere until his arrest.

Both women’s groups, Jness and DOS are based on the teachings of Raniere. Both require members to keep teachings secret. Jness is open to females who want to take entry level self- improvement courses on female empowerment. A beginner is not told about the higher level DOS teachings until she proves qualified. One of the primary teachings of both groups is that women should be monogamous while men are polygamous and a woman should accept both conditions as natural and right.

Since Mack assumed control, Jness evolved into a training ground and recruitment camp for women who might qualify for DOS. The ‘cream’ of Jness women were invited into DOS and the ‘cream’ of DOS were invited to join Raniere’s harem [subject to his approval].

Most harem members were asked to accept Mack as their master, second in command to Raniere.  There were longtime harem members who were ‘grand-mothered in’ and not required to pledge obedience to Mack. Some of these have their own slaves.

Until the exposure of DOS – first by Artvoice [and Frank Report] then the New York Times – Mack proved capable in the recruitment department replacing aging harem members with younger, more nubile women. In this respect she followed the footsteps of her predecessor. Cafritz was the prime harem builder during the years of Raniere’s ascension as a so-called self-help teacher.

When she was alive, Cafritz enjoyed the topmost rank among the harem, and lived for more than two decades [1989-2016] with Raniere in their jointly-owned townhouse on Flintlock Lane in Half Moon, NY. The harem’s second woman – Mariana Fernandez – also lived with Cafritz and Raniere for more than a decade.

Cafritz recruited many women to serve as harem members. She recruited girls under the age of consent for Raniere to train. As co founder of Jness, Cafritz ushered women into the teachings of Raniere. Some of these, though not invited to join the harem, nevertheless pledged their lives to Raniere’s causes.

Some women – including members of the harem – defected. Some under-the-age-of-consent females later condemned Raniere for his statutory rape of them. The statute of limitations passed on two of underage girls and one was shot to death and the coroner ruled it a suicide.  Raniere was never prosecuted for statutory rape. Raniere teaches that sex with children is not immoral provided there is no pain involved. He pointed to Mexico – where the age of consent is 12.

Prior to her passing, Cafritz established the concept of slavery among women united in slavery to Raniere.  Despite being the topmost harem member, Cafritz acted as slave to some women in the harem. Cafritz encouraged new women and girls to become his slaves, and pointed out numerous young women’s most desirable physical features to encourage Raniere’s amorous propensities. She used her modest wealth and social charm to make new women feel welcome and told young ones that having sex with Raniere would be the luckiest occasion of their lives. Out of her six figure annual stipend from her father’s trust, Cafritz paid for Raniere’s personal living expenses for years.

In their domicile, Cafritz regarded herself not only as Raniere’s slave, but also slave to sister wife and live-in harem member, Mariana Fernandez, who was 20 years her junior. Fernandez gave birth to a son by Raniere in 2017. The child was conceived on or about the day that Cafritz died, according to former NXIVM inner circle members.

After Cafritz died – in November 2016 –  Raniere continued to utilize her bank accounts and credit cards. For some time Raniere instructed members of the harem not to divulge Cafritz died.  At least one DOS slave – Rosa Laura Junco — the daughter of Mexican newspaper publisher Alejandro Junco would sign her name on banking and other documents after Cafritz died. Raniere and Mariana Fernandez used Cafritz’s credit card to pay for living expenses.

Discussions were held with followers and Raniere about freezing Cafritz body, and flying her frozen body to the FIJI Islands where she might be restored to life once Raniere – who said he was the world’s smartest man –  discovered a cure for cancer.  Cafritz had such faith in Raniere that she believed he controlled the weather in Albany where they lived. Prior to her death she spoke of having her body frozen until Raniere discovered a way to bring her back to life.

Allison Mack reformed the model Cafritz employed. Where Cafritz considered herself a servant to the women she procured for Raniere, Mack made herself the domina of the slave women. Mack’s structure is based on a 6-6-6- model. She has six top slaves who in turn each must get themselves six slaves and each of these six are required to get six more slaves and etc.

From there, Mack’s ideal was the movement could spread. Mack introduced corporal punishment as part of the disciplinary process. Failure to recruit slaves resulted in corporal punishment. This was administered through a brisk and painful [but not permanently injurious] paddling on the naked buttocks of the offending slaves who failed to recruit or failed to obey Mack or Raniere’s orders…

According to www.allisionmack.com, Raniere began to ‘mentor’ Allison beginning around 2006. It led to her quitting her acting career and she learned from him “a deep connection to the nature of humanity as it relates to acting as an art form, and a tool for personal evolution.”

In 2013, Raniere worked with Mack to develop a company called The Source which she served as president and trainer. The Source is marketed to actors and cost $10,000 per class. Attractive women were sometimes granted scholarships and personal tutoring with Raniere. The curriculum consisted in large part of videos of Raniere discussing “the art of compassion, utilizing the disciplines of acting and expression.”