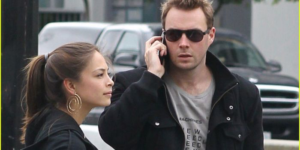 It was one twisted cult.

Mark Hildreth, 40, a Canadian actor with about 100 acting credits, starred as Pastor Tom Hale in the ABC drama Resurrection. He was also a star in the sex cult NXIVM – often picking desirable women in the cult to have sex with, including married women.

In the mid 2000s, Hildreth joined NXIVM. Keith Raniere, its founder, is now in federal custody awaiting arraignment on sex trafficking charges. Hildreth recruited his own girlfriend, actress Kristin Kreuk into NXIVM in 2005. She in turn recruited actress Allison Mack.

About 6 years after joining, Kreuk and Hildreth broke up. Kruek left NXIVM. Hildreth stayed. So did Mack.

Hildreth was a staunch follower of sex-slaver Raniere. He was literally in awe of him. His eyes glazed over when Raniere was talking, sources who witnessed his fawning adoration of the leader of NXIVM say.

Hildreth appeared in videos on YouTube as part of “Keith Raniere Conversations”.  On June 19, 2016, Hildreth wrote on his blog about sex-slaver Raniere:  “This is my friend. His name is Keith. He has been one of the most gentle, compassionate and helpful friends I have ever known. He has been an incredible friend to me and to many people I know.”

Hildreth was listed on the website for Allison Mack’s The Source – an acting program founded by Rainere – as  “Head Trainer”. The Source was used by Mack as a recruiting tool to find Raniere sex slaves.

Around 2015, a young, slender, aspiring actress, referred to in the federal criminal complaint against Raniere as Jane Doe #1 , attracted the attention of Mack. Doe took acting courses at the Source. Mack, seeing she would make a good sex slave for Raniere, paid for Doe to go to Raniere’s expensive 10-day birthday party called V-Week.  Mack paid for Doe to come to Albany where the sex-slave cult was headquartered – before the Feds busted up operations.

Hildreth took a liking to Doe and she thought they were going to be boyfriend and girlfriend. When Doe was in Albany, Raniere attempted to seduce Doe. She was interested in Hildreth. She resisted Raniere’s advances but Allison Mack tricked Doe into joining the slave cult by claiming it was a women’s-only sorority. Mack got blackmail-worthy material on Doe which led to her being coerced into getting branded on her pubic region with Raniere and Mack’s initials then coerced into having sex with Raniere. [All of this will come out at the trial of Keith Raniere and likely Allison Mack.]

Raniere started repeatedly coercing Doe into having sex with Mack as the enforcer saying she had blackmail material on her. Mack threatened to release the blackmail material to her family.  Mack was in a curious position with Doe. While she had to procure sex slaves for Raniere, she became jealous of Doe since it appeared that Raniere preferred Doe to Mack. Raniere allowed Doe to stay overnight in his private sex lair which made Mack extremely sad and jealous, according to Doe and from emails Mack sent to Doe and others that were given to the FBI.

Hildreth – who alternated teaching NXIVM courses and acting – did not like how Raniere was behaving with Doe, and said, “Keith why are your having sex with my girlfriend? This is not OK.”

Mack and other High Rank of the slave cult confronted Hildreth. They told him this was his “jealousy issue” and he had a “huge ethical breach to heal” with Master Raniere. Hildreth quietly quit NXIVM.  He saw women being starved, branded and sexually exploited and said nothing.  Doe stayed. She had to. She was a sex slave. Hildreth did not dare rescue her. He was terrified of Raniere, sources say.

Doe was forced again and again to have sex with Raniere – a man she despised – which was bad enough. But Mack ordered her to seduce another man who Raniere wanted to blackmail.  The man was a suspected pedophile, as is Raniere.

Doe became increasingly unhappy. She was branded with Raniere and Allison Mack’s initials with a hot iron one inch from her vagina. She was expected to be Raniere and Mack’s lifelong slave. She was depressed when she realized that Mack and Raniere were constantly threatening to blackmail her. She lived in terror for more than a year.  Finally Doe left Albany and moved to New York City.  After speaking to this writer and Catherine Oxenberg, she was persuaded to go to law enforcement and make a criminal complaint against Raniere. This helped bring the cult down.

Although Hildreth sneaked away from the cult, he brought others into the sex slave cult of Raniere. Hildreth spent years in senior positions, teaching and recruiting and earning money for a cult. He was a senior recruiter.

It would be good if he mustered the courage to tell the world why he left.

Celebrity members in the NXIVM sex-slaver cult were used for their celebrity. The highest ranking in NXIVM among celebrities was Hildreth.

He makes ‘Fight the Power’ comments on Social Media and highlights causes of social injustice but he is silent about NXIVM. He plays heroes and tough guys in his acting roles.