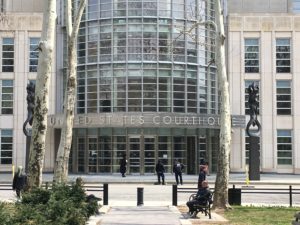 Keith Alan Raniere will be arraigned today at 2 pm. Ironically the date is Friday the 13th.

He will appear in the US District Court for the Eastern District of New York, 225 Cadman Plaza E, Brooklyn, NY 11201.

If you plan to attend, the press office for the court advises to get their early. There are only about 60 seats available. There are three rows of wooden benches on each side of the courtroom. Some people may be able to stand.

A number of media representatives will be there and some of Raniere’s victims will also attend. Although people who are expected to be witnesses in the Raniere trial have been advised not to attend. Frank Report has two correspondents in attendance to see the proceedings. It is doubtful it will be televised. Most likely cameras will be barred. The Associated Press will be there with both cameraman [if permitted] and a sketch artist to render a picture of Raniere as he sits – most likely in shackles and chains – a virtual slave of the government; just as he once was a slave master – they are his masters now.

Today, a number of things may happen. At the least, Raniere will make his “initial appearance” before the court in the Eastern District.

Since the docket says he will be arraigned, there is a possibility that an indictment will be made public, the charges read and Raniere will plead either ‘guilty’ of ‘not guilty’.

It is expected – as most defendants do – that he will plead ‘not guilty.’

There may be a bail hearing today – or it may be scheduled in the near future – for attorneys for the government and Raniere’s attorney to argue over whether Raniere should be granted bail.

Strong arguments have been made in the prosecution’s papers that Raniere is a danger to the community and a flight risk. He was arrested in Mexico, where he appeared to be in hiding. He has access – or so it is believed – to his partner-in-crime Clare Bronfman’s millions. She is represented by attorney William Savino – of Woods Oviatt – who is already suspected of suborning perjury and his reputation is that he is willing to do anything for a dollar. If Raniere is released, he may try to flee to Fiji or another country with little or no extradition policies or treaties with the US.

Raniere’s attorney, Paul DerOhannassian of Alabany, is an expert on sexual assault cases. He will undoubtedly make an argument that Raniere could be monitored with ankle monitors and kept within the jurisdiction by home arrest. In this way, his lawyer would have easier access to him. If Raniere is held in a Brooklyn prison, the only way for an attorney to consult with his client, is to travel to the facility and meet him in a prison in a room reserved for such meetings.  This makes the defense much harder to put on its case.

The prosecution is expected to rebut that even ankle monitors might not be enough to ensure the wily Raniere will not escape jurisdiction. Bronfman has access to a private jet; they could break ankle monitors or flee with them on and zoom off before anyone might be able to arrest them.

If the hearing for bail is today, the judge may make a decision on the spot. I can hardly imagine any judge in his right mind permitting bail for Raniere. Maybe he would not try to escape, but imagine if he did. How that judge would wear it for the rest of his life.

Raniere has still some devoted or crazed followers. They might do anything to rescue him – or perhaps even enter a suicide pact. If Raniere is at home he will be able to directly influence them. While justice dictates that one is innocent until proven guilty, I doubt that any judge will take a risk and allow Raniere to spend a day out of prison until he is either convicted or acquitted.

If the bail hearing is today and the judge renders a decision and that decision is that Raniere may not have bail, then he will return to prison where he will remain until the trial. With pretrial motions that trial may take up to two years to commence. Any time he spend in prison pre-trial goes toward time served.

Raneire has the option to ask for a speedy trial and if that is granted the trial might commence in a few months.

If the indictment is made public today, the various charges will be revealed. There may be others who are indicted. They may be arrested or allowed to turn themselves in.

On the other hand, none of this may occur today. Perhaps he will only make his initial appearance. And then in shackles and chains, with handcuffs keeping him from using his hands to gesture, the slave will return to his cell.

If you plan to attend, get there early, there may a little, or a lot to see. 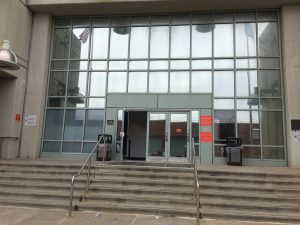