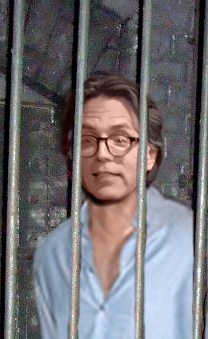 Keith Raniere is used to having his own way. But for now – and until he gets out of prison – he will have little to nothing his way. He will now follow orders. He is not the Vanguard. He is # 57005-177.From the prisoner’s handbook:

A general wake-up for all inmates is 6:00 a.m. It is the inmate’s responsibility
to participate in meals and work. Inmates who are assigned a job and do not report to
work are subject to discipline.

Sanitation
It is the inmate’s responsibility to check his cell immediately after being assigned there
and report all damages to the Unit Officer or Correctional Counselor. An inmate may be
held financially liable for any damage to his personal living area.

Each inmate is responsible for making his bed in accordance with posted regulations before work call (including weekends and holidays when he or she leaves the area). Each inmate is also responsible for sweeping and mopping his cell floor, removing trash, and ensuring it is clean and sanitary. Cardboard boxes and other paper containers are not permitted for storage. Due to their combustible nature they become a fire hazard. Lockers must be neatly arranged inside and out, and all shelving must be neat and clean. Chairs are assigned to each cell, and will not be defaced or marked in any manner by the inmate.

Toothpaste, toothbrushes, combs, razors, and soap for personal hygiene are issued by the
institution. Inmates may purchase name brand items through the Commissary.

Letters, Books, Photographs, Newspapers, and Magazines
An inmate will be limited in the number of letters, books, photographs, magazines, and
newspapers that can be stored in their designated storage space. Nothing is to be tacked,
stapled or scotch taped to any surface except to bulletin boards.

Ordinarily, photographs, particularly those of family and friends, are approved, since they represent meaningful ties to the community. A personal photograph is defined as a photograph intended for individual viewing, as opposed to a photograph published for commercial use.

Personal photographs may be stored or displayed in the housing units according to local
sanitation and housekeeping guidelines. Inmates may not retain Polaroid photos. Nude or sexually suggestive photos (individual prints or copies as opposed to those from
publications) present special concerns about personal safety, security, and good order,
particularly when the subject is an inmate’s relative, friend, or acquaintance or could
reasonably be perceived as such. For these reasons, an inmate may not be permitted to
retain, receive, or possess a personal photograph in which the subject is partially nude
or nude, or when the photograph depicts sexual acts such as intercourse, fellatio, or
sodomy. These materials will be returned to the sender upon receipt at the institution

{This indicates to me that Keith will not be able to possess any of the collateral he has coerced or tricked women into giving him.]

Dinner Meal
Monday through Friday After the 4:00 P.M. count has cleared.

Dinner Meal After the 4:00 P.M. Count has cleared.

Mainline is called by the Unit Officer and followed by a last call. It is the inmates’
responsibility to report to mainline during meals hours.