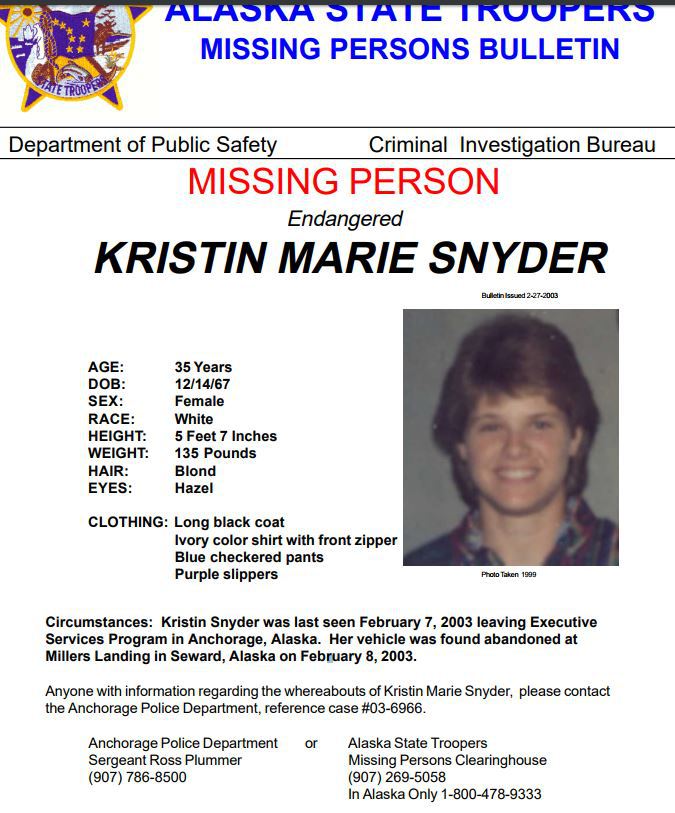 Alleged sex-slaver and cult leader Keith Raniere, currently in federal pretrial custody with pending charges of sex trafficking and forced labor, is being scrutinized by federal law enforcement as he never has before.

Aside from the 1990s Consumers Buyline scheme, which was shut down by the NY Attorney General as an illegal pyramid scheme, NY State state and federal law enforcement in the Northern and Western Districts of New York have long turned a blind eye to crimes and intimidation committed by Raniere, his financial enabler, Clare Bronfman, and others in the cult.

Questions still linger in a 15-year old case of a woman, Kristen Snyder, who was reportedly pregnant with Raniere’s child at the time of her disappearance. Officials concluded she committed suicide. As the current federal probe intensifies, turning over all stones in the vast Raniere/Bronfman network of criminal activity, the story of a long-forgotten victim warrants revisiting.

Kristin Marie Snyder, born on December 14, 1967, was last seen on February 6, 2003.  She was 35.  The official story is that she committed suicide by taking a kayak out to sea in Alaska and tipping it over on purpose. Her body was never found.

Snyder was an environmental consultant in Anchorage, Alaska. She lived with her domestic partner, Heidi Clifford. A member of the Anchorage Nordic Ski Patrol, Snyder was qualified in survival training and avalanche rescue. She was an avid kayaker – and a respected business person in Anchorage. 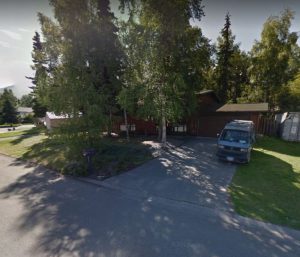 In November 2002, Snyder attended a 16-day NXIVM “intensive” in Anchorage taught by Nancy Salzman, known also as Prefect in the cult.

The course seemed to make her unhinged. Snyder visited her parents, Robert and Jonnie Snyder, at their farm in Dillon, S.C. for Christmas 2002. 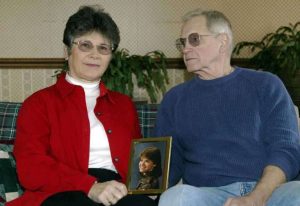 She appeared angry and tearful, and claimed Raniere was incredible, her parents said. When her parents challenged her about Raniere, Snyder ended discussions and telephoned her ESP “coach”.

Her parents said they saw a “descent into mental illness … that …  was a direct result of the manipulation of her mind by…’Vanguard’”.

After leaving her parents, Snyder visited ESP headquarters in Albany, NY in January 2003.

Raniere was excited about “mentoring” her.  Raniere, a self proclaimed scientist, said he wanted to conduct experiments on gay women to determine if his mentoring could convert them to heterosexual. According to other women Raniere has mentored, he does not use condoms when mentoring women.

After being mentored by Raniere repeatedly, Snyder returned to Anchorage. She took a second 16-day NXIVM “intensive”, taught in January-February 2003 at the Westmark Hotel.

“Vanguard doesn’t sleep, so I don’t need to sleep”,  Snyder said, according to Clifford.

Sources say Raniere does sleep little at night. But he sleeps a full eight hours during the day, he said.

Alaska State Police Sgt. Brandon Anderson said there were notes written by Snyder that indicated a “sort of a mental breakdown” was occurring.

Thanks to her NXIVM classes and one on one NXIVM therapy sessions, Snyder became absorbed with trying to remember details from childhood.  She “remembered” she had been sexually abused as a child.  During her last call to her parents, Snyder told them she was responsible for the explosion of the space shuttle Columbia which disintegrated and killed seven people on Feb. 1 2003.

What was not reported until now is that Snyder told friends Raniere got her pregnant. One of the NXIVM teachers, Esther Chiappone told students Snyder was delusional and to ignore her comments. Chiappone claimed Snyder was saying things to get attention.

According to the story NXIVM members told police, Snyder left the seminar at 4 pm and drove off in her 1999 Toyota truck. But a sources who was there claim that Snyder’s truck was parked at her home and she came to class with other students that day.

The official NXIVM story is Snyder voluntarily left class. But several eyewitnesses tell Artvoice that Snyder did not voluntarily leave was ordered to leave by Chiappone.

Although Chiappone told students Snyder was delusional, when Clifford asked if she could bring Snyder to a hospital,  she was “…told not to bring her to the hospital. ” according to  Clifford.

No attempt was made to get her medical attention.

Whether she left or was ejected, the class continued without Snyder.

According to her “Presumptive Death Certificate”:

Clifford told police she suspected Snyder was headed for Seward, Alaska, about 130 miles from Anchorage. 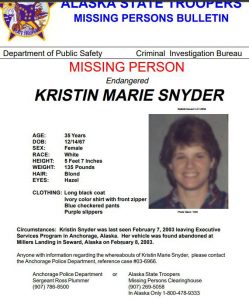 The following evening [Feb. 7, 2003], Snyder’s truck was discovered at Miller’s Landing, a campground, fishing and kayaking resort in Seward, on Resurrection Bay. The driver’s door was unlocked and the key was in the door lock. Two handwritten notes were reportedly found on the passenger seat.

“I attended a course called Executive Success Programs (a.k.a. Nexivm) based out of Anchorage, AK, and Albany, NY. I was brainwashed and my emotional center of the brain was killed/turned off. I still have feeling in my external skin, but my internal organs are rotting. Please contact my parents … if you find me or this note. I am sorry life, I didn’t know I was already dead. May we persist into the future,”

The other note read:

“No need to search for my body.”

The next morning, according to her “Presumptive Death Certificate”:

Millers Landing resort personnel discovered a storage shed containing kayaks and gear had been broken into and an old kayak was missing. The storage shed was close to where Snyder’s vehicle was located.

A kayak was missing from a shed nearby. This kayak, made of wood and fiberglass, with no rudder, was not outfitted for flotation. It had not been in the water for 15 years. It was described as seaworthy but would sink if tipped.

On February 8, 2003 and February 9, 2003 a large search effort was conducted in and around Resurrection Bay. The search consisted of Alaska State Troopers, Seward area fire/EMS volunteers, the US Coast Guard, Forest Service law enforcement, the Seward Police Department Civil Air Patrol and friends of Snyder, many of whom are part of an organized search and rescue team as part of the Nordic Ski Club. After two full days of active searching no sign of Ms. Snyder was located. Air flight was accomplished on 2/14/03 with negative results.

During the investigation, no one from NXIVM was permitted to speak with police until the cult members cleared it with NXIVM leadership. Police went along with this unusual condition and during every police interview with witnesses, NXIVM officials were present during the interviews with police.

Police seemed to ignore any evidence that might point to something other than suicide.

For instance, a set of fresh footprints was found at a nearby cabin. 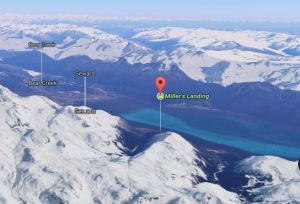 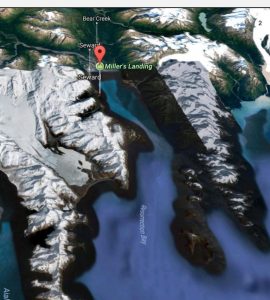 The owners of Miller’s Landing provided police with the name of a cabin owner who knew Snyder. Her name is [Name Redacted]. [Name Redacted] was not at the cabin. She was called by police and not only admitted she knew Snyder, but admitted she attended the NXIVM seminar with Snyder. She said she was there when Snyder left the seminar but told police she thought she went to attend a Performing Arts Center show. [Name Redacted] terminated the phone interview abruptly in order, she said, to call friends and said she would call police back. She never spoke to police again.

Investigators searched her cabin.  Nothing was found. Higher ups in the investigation decided not to interview her again.

Police concluded Snyder drove to Miller’s Landing before dawn on February 7th, paddled a stolen, creaky 16-foot kayak into the bay and intentionally capsized in the glacier-fed water.

“Everything points to the fact that she took a kayak into the bay to kill herself and she rolled over and now she’s gone,” said Alaska State Trooper Paul Randall, who supervised the search.

The kayak and her body were never found.

Sources told Artvoice that Snyder was in no condition to drive 130 miles from her home in Anchorage to Seward where she allegedly broke into a shed, stole a 16-foot kayak, carried it to shore, and paddled out into the glacial waters.

They wonder if she might have been kidnapped to stop her from saying more about Raniere.

Raniere later claimed Snyder never committed suicide but faked her own death to escape a drug ring she cheated – and was living in British Columbia. No evidence was offered to prove that claim.

Later Raniere claimed to have photographs that proved Snyder was in the Grand Canyon with Clifford months after her supposed death. He never released the photos.

Snyder’s parents held a memorial service for her in March 2003, about a month after she disappeared.

An Anchorage District Court jury determined that cause of death was suicide in 2004.

Sources in Clifton Park told Artvoice that Raniere ordered at least eight abortions performed on women he impregnated. They  say he threatened women when they said they did not want an abortion.

Raniere has two known children, one born in 2006, and another in 2017. After the first child’s birth, Raniere lied about the paternity of the child to followers claiming the child was an orphan and his father was unknown.

On a 2009 video posted on YouTube, Raniere told two women, “I’ve had people killed because of my beliefs — or because of their beliefs.”

In light of Raniere’s actions – and new information concerning Kristin Snyder – this “cold case” might be due for a warm re-examination.

Did she drive herself to Seward?

Did someone drive her to Seward?

Did she go to Seward?

Did Raniere  order her murdered?

Did Raniere seduce a student which t may have caused Snyder to become unhinged.

Add to the mix, the curious fact that Raniere told Clare Bronfman to pay $500,000 to private investigators to carry out an assignment never put in writing – to find Kristin Snyder.  Were they hired to do an investigation into Snyder’s disappearance – or to cover up what happened to her? 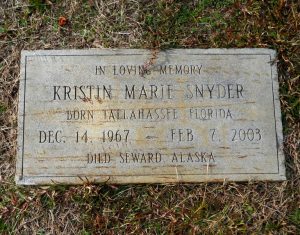