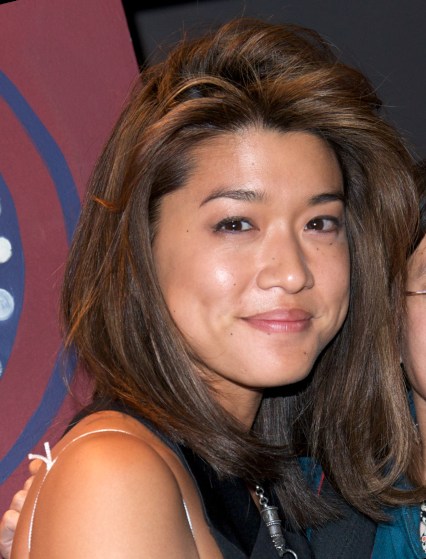 George offers money to take down info about Grace Park

I did not reply. His email seemed to require no response. I soon forgot about George Lopez.
Eleven days later, on April 19, I received this from George:
frank
how much do you want?  you make it disappear… how much name a price.
***
I get hundreds of emails. A lot of them are cranks. I ignored the email. [I should have questioned why some guy who barely knows Grace Park would want to pay money to take down info on her on my website?]  The following day, I got another email from George [or whoever he or she is]. It came after I was reporting that Allison Mack was arrested.

frank
your record sucks as a human…..what you forgot to mention is this
Battlestar Galactica actresses Grace Park and Nicki Clyne, and Smallville star Kristin Kreuk were member of the organization at one point. However, Park and Kreuk have since cut ties, with the latter leaving the group in 2012.
i only hope you die a slow and painful death you fucking cocksucking piece of shit….
***
I responded:
Who are you coward? Park did not leave the cult in 2012. Kreuk lied about her role – the two – both got a lot of people in and I’m going to write that – unless of course it is you who plan to provide that slow death.
***
George fired back:
what are you gaining by this…[?] what’s your fucking angle….[?]
George linked articles about the 2015 federal criminal indictment against me – starting with one in my publication — Artvoice . Perhaps George thought I was hiding the fact I was indicted.
IS FRANK PARLATO GUILTY OR INNOCENT? – Artvoice
Before I could respond, he wrote:
“HEY FRANK  FUCK YOU.”
I wrote back:
[I] will be writing extensively about Grace Park and Kristin Kreuk
George fired back:
Grace is my distant friend I don’t know the other woman [Kristin Kreuk] at all  … it’s all about money to you.
how much…..how much do you want… [?] was liz smith your mother? POS
***
Then he fired off another email:
you’re a crook and you know it.
Then another – with just a link: Parlato facing 19-count federal indictment
Then another with the same story:
http://www.lockportjournal.com/news/local_news/parlato-facing–count-federal-indictment/article_fc476986-6174-5370-8078-ff8590061ed3.html

Then George – in his next email – pulled the old ‘switcheroo.’ The “I’m-not-the-guy-I-originally-said-I-was”. He wrote:
ok
you blew this one big time…my guess is you won’t print this nor will you own up to it….. you are outed…. some fucking detective you are….. did you look at IMBD?  did you see my name listed under Hawaii Five 0…[?]  You are so taken with yourself that you actually believe you were talking with someone Grace knows…  so how’s it taste[?]
Like you, I LIED…..everything you have said will be reprinted….on the internet.  some fucking reporter you are…. nothing but a cheesy crook who got taken
HOW DOES IT TASTE NOW DICKHEAD?
***
Then George [or Grace?] added in a follow up email:
would you like your shit sandwich with mayo lettuce and fries?
Then George sent the same story again adding:
print this you POS so everyone knows who you are
And put the same story again as a link:
Parlato facing 19-count federal indictment
I replied
I am going to post your original email and all your other emails including your death threat to me.
***
Lopez:  there was no death threat
Frank: there most certainly was and I am forwarding your emails to the FBI agent who is working on this case.
George: ok
A few moments later he wrote another email: en cualquier momento [‘anytime’]
That was the last I heard from George Lopez
***
I wonder if this person who wrote me is really a man named George Lopez or someone else? He or she seemed awfully worked up about Grace Park – for such a distant friend as he claimed to be.
As for me being shy about writing about my indictment, the tipping point for me, the motive for me to develop the Frank Report, was because I was indicted. I believe my indictment was brought about by Keith Raniere ordering Clare Bronfman to perjure herself in a grand jury to get me indicted.

As for hiding my story, it might be a hard argument to make. I wrote so many articles about my case that the US Attorney in the Western District NY  made a motion for a gag order before Magistrate Judge Jeremiah McCarthy. The motion was denied.

I don’t know how many defendants have the DOJ worry over them writing about their own case too much – that they have to try for a gag order.

But I did not bother to tell George this. I did not feel he had the comprehension. George or whomever this is – maybe someone from NXIVM – maybe a friend of Grace Park or Grace herself – must think that I am easily frightened.