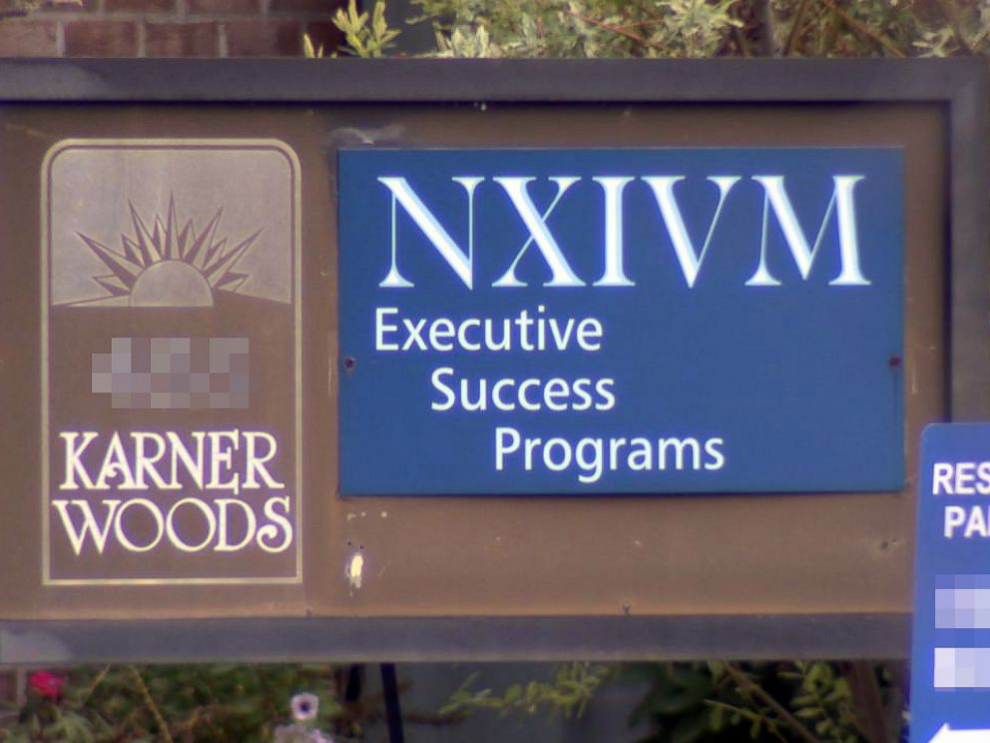 The sex slave cult of NXIVM also goes by another name: “Executive Success Programs” or “ESP.”

It has the appearance of a life-coaching company. But not one member I know of has gone on to executive success. Its high profile members have been impoverished, reduced to sex-slavery, even criminally indicted.

ESP was founded in 1998 by Keith Raniere, a criminal defendant now indicted on charges of sex-trafficking and conspiracy to commit forced labor.

Raniere founded its sister company, NXIVM, believed to have been named based on the ancient Roman Nexum, indentured servant contract practice.

Raniere bills himself as “one of the world’s top three problem solvers … honored in 1989 by the Guinness Book of World Records in the category of highest IQ. He has an estimated problem-solving rarity of one in 425,000,000 with respect to the general population.”

Federal investigators obtained copies of Raniere’s transcripts from the Rensselaer Polytechnic Institute which revealed he graduated with a 2.26 GPA, having failed or barely passed upper level math and science courses.

On the Executive Board of ESP is Seagram’s heiress, Clare Bronfman, the “big money” behind ESP, NXIVM, and Raniere.

Federal authorities allege Bronfman “provided [Raniere] with millions of dollars and paying for private air travel costing up to approximately $65,000 a flight.”

Does the self-proclaimed world’s smartest man produce results commensurate with these fees? The history of some of Raniere’s most high-profile devotees suggest otherwise.

Recently indicted, along with Raniere, on charges of sex trafficking and conspiracy to commit forced labor, Mack faces a mandatory minimum of 15 years in prison if convicted.  Mack was introduced to Bronfman/Raniere in 2006 by friend and co-star Kristin Kreuk.

Barbara Bouchey, a NXIVM victim and ex-girlfriend of Raniere, told Fox News,“[Mack] was famous, talented and a good person,” and “came into the organization because she had a void in her life and because she felt vulnerable.”

Upon entrance into ESP/NXIVM, as I told Hollywood Life, “They love bombed [Mack] all weekend and then, at the end of the weekend, Clare Bronfman, a billionaire Seagram’s Liquor heiress (who is also a huge part of Nxivm) flew Allison on a private jet to Albany, New York to meet Keith, who calls himself ‘The Vanguard.’ All members, unless they have permission otherwise, must refer to him as this. Allison met with ‘The Vanguard’ and he pulled out all the stops. It was important to have her on board because another actress would be an excellent thing to have, she could recruit lots of other young beautiful actresses for them.”

Prior to joining, Mack earned significant money for her role in the nearly decade-long role in Smallville. She took her fortune with her to Clifton Park, NY (the cult’s headquarters) and soon lost it.

Raniere convinced Mack to give up her acting career to focus on his direction, guidance, and further entrenchment into the cult. Later Mack was tapped to recruit women for Raniere, and, federal authorities allege, she was paid money for it; i.e, she pimped.

Mack rose in Raniere’s confidence and they began a sexual relationship, where she was barred from sleeping with any man but him, yet he would continue to have sex with anyone in the cult he chose.

Many women provided Mack, Raniere, Bronfman and others with “collateral” which consisted of graphic nude videos and photographs, confessions of crimes, and even manufactured confessions of such things as child molestation.

Raniere, Mack, Nancy Salzman (known as “Prefect”, whose house was raided last month by the FBI), and Bronfman held collateral over the woman and made women continue to supply more collateral to ensure compliance with Raniere’s demands.

The demands included adherence to a 500-800 calorie per day diet. Raniere prefers women to be thin and says fat disturbs his spiritual energies and can cause him to be ill, if a woman he is having sex with is too fat. Various women were unable to menstruate after adhering to the diet.

The women had no choice but to comply.  New York State law enforcement, and the FBI in the Western and Northern Districts of New York ignored victims’ complaints for years.

Bronfman would sue anyone into bankruptcy or prison who dared leave, complain, or defect.

After more than 10 years, Mack went from actress with a fortune to an emaciated pimp with three federal felony counts against her, with her guru-boyfriend facing a life sentence.

Mack has not profited from ESP; the company cannot be said to have made her an Executive Success.

India Oxenberg is the daughter of Catherine Oxenberg, star of the 1980s hit TV show, Dynasty. India is the granddaughter of Princess Elizabeth of Yugoslavia. India was first introduced to NXIVM in 2011 by her mother, Catherine, who believed the so-called self-help group could help her.

While Catherine soon found the group “weird and creepy,” India become enamored with the cult. And India was as tantalizing to Raniere as Mack was, with her celebrity status and money.

India exhausted her inheritance to pay for NXIVM’s courses, and now works at Plantmade, a restaurant, in New York City.

Catherine became concerned about her daughter’s involvement with the cult when she discovered that her daughter’s hair was falling out, that she had not had her period in a year, and that she was becoming emaciated.

When Catherine could not persuade India to leave the cult, and it became apparent her daughter was brainwashed, Catherine launched a campaign to rescue her daughter and shed light on their destructive and illegal practices. She appeared on various TV shows and gave interviews to the media. She played a major role in bringing about current federal charges against Raniere and Mack.

India vowed to go to prison to protect Raniere. She reportedly told someone  ‘I will be like Nelson Mandela.’

She is to date not what many would call an executive success.