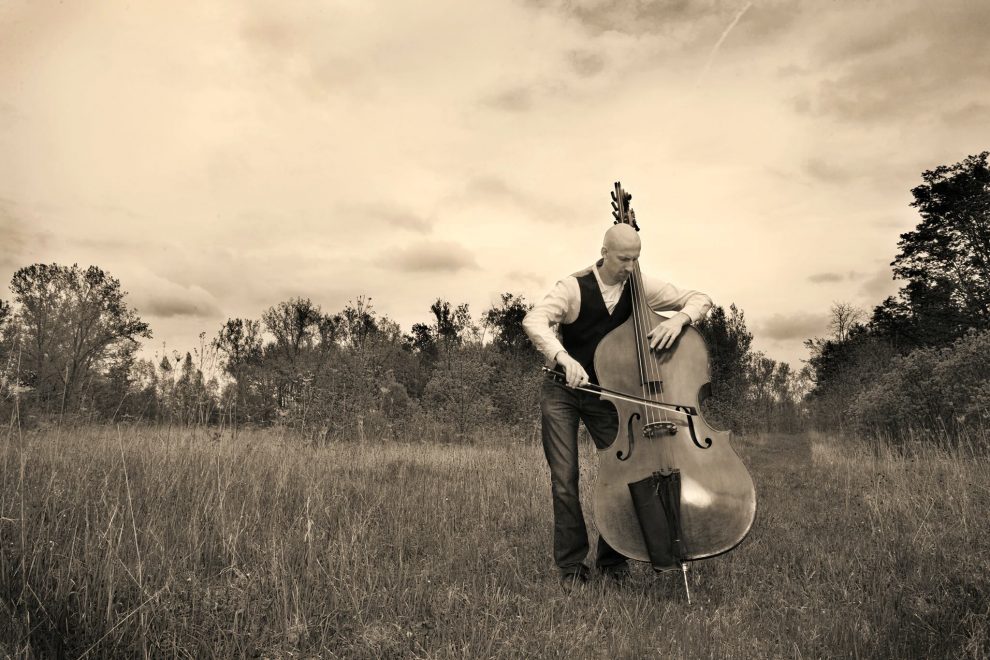 The final concert event in this season’s Friends of Vienna concert series takes place on Sunday April 29 at 3:30pm in the Unity Church, 1243 Delaware Avenue in Buffalo. For the first time in the FOV’s 41-year history, the double bass will be featured as BPO associate principal bass Brett Shurtliffe presents an innovative recital along with his accompanist, pianist Amber Nicholson. Shurtliffe’s program will stretch most audience members imagination as to the depth and variety of music that can be successfully played on the double bass.

One of the highlights of the program will be Shurtliffe’s interpretation of Pablo de Sarasate’s Zigeunerweisen (Gypsy Airs), a fiendishly challenging work written by the composer for his own concert performances on the violin. “I first started working on Zigeunerweisen during my sophomore year at Eastman”, says Brett Shurtliffe. “Two revolutionary bassists, Rodian Azarkhin and Edgar Meyer had recorded it and I feel in love. I floated the idea past my teacher James VanDemark, who supported my creation of a transcription from the original violin part. Of course, it was a huge undertaking for someone so young; but because of that, it stretched me quicker and further than I thought possible. As a teenager, I didn’t do the piece justice on its first performance, and I knew it. That drove me to keep coming back to it over the years, and each time I revisit the piece, I learn something new, find a new way of overcoming a technical challenge, or dig deeper into one of the soulful melodies. It remains the piece that I feel most deeply attached to and has defined my progress as a musician”.

“I’m also presenting two works by Russian composers that were arranged by Rodian Azarkin. The Romance by Gliere will be well known to violinists, but E. Plutalov’s Humoresque was completely unknown to me. Not only have I never heard the work before, I’ve never heard of the composer before, and I can’t find anyone who knows anything about them either. I don’t even know what the E. in E. Plutalov stands for! I came across the music in a collection of transcriptions by Azarkhin and was immediately drawn to it as it is written very idiomatically for the bass. If Plutalov wasn’t a bassist, I’d be very surprised. In the style of bassist’s greatest performer/composer Giovanni Bottesini, the Humoresque is unapologetically charming. While neither deep in emotion, nor wild in technical challenge, it has the right balance of comfortable melodic ease, and quick energetic spontaneity. This will be the first time I’ve performed this work, but I foresee coming back to it many times in the future, as it’s a real treat to perform”.

“As I said, I’m playing two works by Russian composers. Most bassists I know are introduced to the ‘Russian’ style of romantic composition by Serge Koussevitzky’s Concerto for Bass. His compositional style, along with the recording he left us of his own performance, has had a profound influence on my own interpretation of Russian romanticism, and my playing in general. We need look no further than the 20th centuries first great bass soloist Gary Karr, or the NY Philharmonic’s longtime principal bassist Eugene Levinson, to see the influence Koussevitzky’s Russian style of playing has had on a generation of bassists around the world. The idea of thick, heavy, and connected lyrical playing is central to the performance of so much of our solo literature, that over the years, I’ve found myself coming back to those concepts of tone taught to us by Koussevitzky”.

“For years I’ve played a work for bass and piano called Gallery by composer Daniel Walker. I heard the premier performance in 2001 and bought the sheet music minutes afterward. It’s at the center of this recital, and many of my other recitals, because of its vivid musical portrait of an imaginary art gallery. When a visual artist presents a solo gallery, you get to see multiple images that when seen as a collection, reveals the soul of the artist. That idea has always intrigued me, and I’ve strived to present recital programs that mirror that idea. If a visual artist doesn’t believe in the beauty, or importance of the subject they are presenting, it becomes clear in their work. The same is true with music. I only perform works that I believe in. While some are old favorites like Gallery and Zigeunerweisen, there are also the two new Russian works that I still feel are evolving quickly. Joseph Jongen’s Prelude, Habanera et Allegro is a work I last performed at my senior recital at Eastman, and something that speaks in a different language than everything else I play – think Debussy. Vaughan William’s Six Studies in English Folk Song are tied to my love of folk music of the British Isles, while my Shenandoah Loop and Hymn Loop are the music of America; deeply personal to me. While my gallery has a wide variety of sounds and ideas, hopefully, the thing that ties them all together will be the soul of the performer on display”.

“My first memory of seeing an electronic looper was a performance by Victor Wooten. Around the same time Yo-Yo Ma and Bobby McFerrin released an album together where they were each creating unconventional sounds as an accompaniment to the other’s melody. his idea of your instrument acting as melody, harmony, and rhythm really appeals to me. As a bassist, we often fill those supporting roles, and I love laying down a good bass line – but with a looper [effects pedal] I get the chance to fill in all parts creatively, in my own way. I can compose on the spot, without the need to find a collaborator. While I love chamber music and have always enjoyed working with other string players, there isn’t an overwhelming amount of repertoire that includes bass. Using the looper allows me to play chamber music all by myself. I’ve been incorporating the use of my looper more and more into my recitals in a variety of ways. It can provide pedal points to improvise over, and in one piece I play, reproduces a groove I, and the whole audience can sing along with. I’ve also used it to pre-record different layers of sound that I can change between as I create something new over top of them. Being able to record any sound you want in the ‘studio’, then use it live allows for an infinite selection of sounds. The two-looped works I’m presenting on the FOV recital are pieces I’ve played many times, and don’t have any sections of improvisation. They are both based on traditional tunes and are created as I play, with no pre-recorded tracks”.

Mexico’s Biggest Criminal: The Salinas de Gortari Crime Family
How to write NXIVM sex-slaver Raniere; help him get through boring days in prison