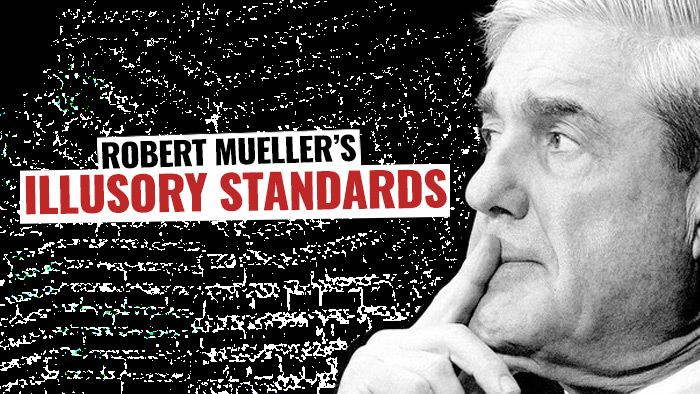 It has been nearly a year now that our country and our political life have been serially-afflicted by the legal and political abuses of a temporary government hire and largely-unaccountable partisan rogue lawyer named Robert Mueller.

Operating under the nominal authority of the Justice Department and, thereby, the Chief Executive himself, Mueller has ruthlessly exploited ad hoc powers widely-granted to him as Special Counsel for the Russia collusion hoax to cast an ever wider dragnet, plumbing deeper and deeper into waters never contemplated when Mueller’s career-long crony and Deputy Attorney General Rod Rosenstein summarily appointed him to this “job”.

From the moment Mueller assumed this dubiously-conceived post, the operation he set up to chase phantom Russian ties to President Donald Trump involving the 2016 presidential race has steadily degenerated into a relentless quest to unearth anything whatsoever against anyone with any relation to Trump’s campaign team who might have done anything wrong.

Not satisfied that his original area of investigation found that no crimes had been committed in any way bearing upon the Trump Campaign or the 2016 election and any foreign actors, much less Russians, Mueller has acted to justify his existence, and the millions of taxpayer dollars he and his hit team have burned, by expanding his scope of prosecution to encompass DOJ referrals, reports by Inspectors General, and various congressional investigations.

Mueller has made it clear that he views even the appearance of inaccurate or incorrect statements by anyone who he or his legal goons happen to interrogate to be felonious behavior.

While it’s commendable, in theory, for Mueller to impose such stringent standards of ethical behavior on his targets or interview subjects, Mueller’s credibility in doing so only holds up if he applies these supposed standards uniformly to everyone, across the board.

No one would dispute that we should all be accountable for observing the same rules. This begs the question: why is Mueller overlooking some of the most glaring and felonious behavior right under his nose?

Since Alex Van Der Zwaan, George Papadopoulos and Michael Flynn have all been charged with lying to the FBI, it would seem necessary, proper and logical, if nothing else, that Mueller would have already acted by now to charge former Deputy FBI director Andrew McCabe with perjury for McCabe’s numerous lies to his own FBI cohorts and to other responsible officials of government, while under oath. A report from the Office of Inspector General has concluded that McCabe lied to federal investigators at least four times.

Similarly, disgraced former FBI director James Comey has been caught in several lies when he falsely testified that he had not written his report on the Hillary Clinton email scandal before he had interviewed Clinton herself. Two months before Comey’s bizarre, unprecedented and authority-exceeding July 5, 2016 press conference in which he effectively exonerated Clinton, Comey had begun writing the statement he would ultimately give in that appearance.

In laying out his elaborate apology excusing Hillary Clinton’s serial criminal flouting of numerous federal laws governing classified materials, Comey claimed that he had never shared nor coordinated his statement with anyone in the White House, the DOJ or any other part of the government, outside of the FBI inner circle conducting the Clinton investigation.

Yet text messages between the FBI’s Counterintelligence Section Chief Peter Strzok and FBI lawyer and Strzok mistress Lisa Page confirm that Attorney General Loretta Lynch already knew what Comey was going to say, four days before Comey’s July 5th valentine to then presidential candidate Hillary Clinton. This cleared the way for the politically-compromised Lynch to announce on July 1st that she would simply accept whatever recommendation Comey was to make.

In May 2017, Comey gave sworn testimony to Congress about the questionable course of events surrounding the purported probe of Clinton criminal activity involving official communications and classified materials. Comey was asked point blank if he had ever authorized someone else at the FBI to be an anonymous source in any news reports about either this investigation or the investigation of Donald Trump concerning supposed Russian “collusion.”

Without allowing for even a breath of air between the end of this question and his response, Comey shot back “never” and “no.” The problem is that Deputy Director McCabe admitted in testimony that he had, in fact, not only leaked information to the media and that he had the authorization to do so, but also that then-Director Comey had knowledge of these leaks.

One or both of these men clearly lied under oath in matters of serious national consequence.

Former Director of National Intelligence, now professional Trump hater, James Clapper was asked during sworn testimony before a Senate Committee if the NSA collected any type of data at all on millions or hundreds of millions of Americans.

Clapper responded “No sir…not wittingly.” Thanks to Edward Snowden, the world soon discovered that this was a bald-faced lie constituting a brazen act of perjury intended to deceive Congress and subvert its oversight function.

When United States Senators in leadership posts from both parties demanded to know from Brennan whether the CIA had illegally-breached and spied on computer systems used by the staff of the Senate Intelligence Committee, Brennan unequivocally responded to these Senators that “nothing could be further from the truth.”

Not long after this, facts came out proving that there was, in fact, something that couldn’t be further from the truth and it was Brennan’s denial that his agency was spying on the United States Senate Intelligence Committee.

Of course, this wasn’t the first time Brennan was caught in a brazen lie intended to deceive government officials and the public. In 2011 Brennan claimed that dozens of U.S. drone strikes on overseas targets had not killed a single civilian.

Facts later emerged showing that President Obama had been receiving reports from the beginning of his presidency that the drone strikes had, indeed, killed dozens of civilians.

As Obama’s top counterterrorism advisor, Brennan was well aware of these reports and knew not only that the Obama drone strikes had murdered scores of innocent bystanders, but also that his denial of this truth was a calculated and purposeful lie.

Hillary Clinton aides Cheryl Mills and Huma Abedin lied to FBI investigators about having no idea that Clinton had been using an illegal private email server. In interviews with FBI section chief Peter Strzok, Mills and Abedin repeated these lies, yet Strzok gave them a pass and they walked away scot-free.

If only General Michael Flynn had been so fortunate when he made inconsistent statements to the hyper-partisan seething anti-Trump fanatic Strzok when Strzok took charge of interrogating the General.

Robert Mueller is a government barnacle who worked alongside many of these criminal liars during his tenure as FBI Director. Their unflinching lies about serious national security and law enforcement matters appears to stir no interest from this supposed “boy scout” of a G-man lawyer. If Mueller had any real interest in serving justice, he would have something to say about these treacherous deceits.

If Mueller was about justice, rather than deep state crony protectionism and a maniacal lust to do whatever it takes to undermine and subvert the current President of the United States, he might actually feign concern and even take action on, for example, the reams of evidence about Christopher Steele and the Hillary Clinton Campaign.

He might think it of interest, even in passing, that Hillary Clinton had surreptitiously funneled millions of campaign dollars to this foreign agent Steele, while concealing the payments from disclosure by submitting fraudulent campaign finance reports (now under investigation by the FEC).

He might think it somewhat relevant to his high holy mission of rooting out Russian collusion that Clinton had conscripted a foreign spook who commenced to collaborate with Russian intelligence assets to either dig up or fabricate dirt on Donald Trump for use by Clinton and her many Trump-addled sycophants.

He might actually think it his duty to focus his legal hit squad (notwithstanding all their donations to the Hillary campaign and their fawning support for her candidacy) on the Clinton Campaign’s collusion with Russian intelligence, via Mr. Steele.

Mueller might even see the truth about the lies and manipulations perpetrated, even to this day, by Clinton and her support network of high-level professional deceivers, from Mills to Abedin to Comey to McCabe to Brennan to Clapper to Strzok, and on and on.

But we all know that this would require Mueller to have just one standard for all of his quasi-ethical pieties and sanctimonious persecutions.

Unfortunately, Mueller’s conduct has made it abundantly clear that he is not operating on a single, but rather a double standard. And the grim truth about this is that it means Mueller is operating on no standard at all.

This story was originally posted at Stone Cold Truth–