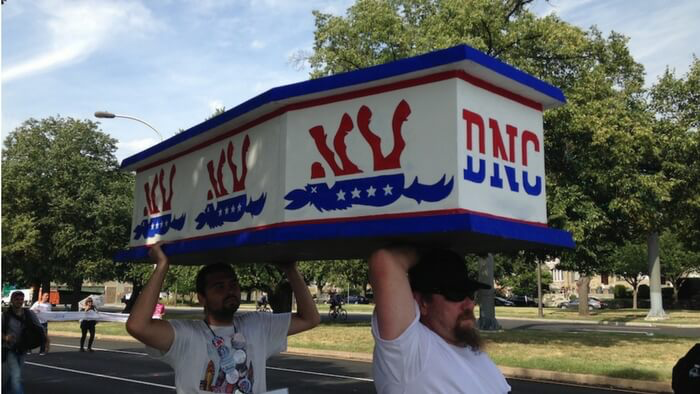 Last Friday, the world found out that “DNC” no longer stands for Democratic National Committee. With the filing of its collusion delusion copycat lawsuit in federal court against Russia (yes, the whole country), Russia’s intelligence services, WikiLeaks, “Guccifer 2.0”, the Trump Campaign, Julian Assange, Donald Trump, Jr., Jared Kushner, Paul Manafort and a number of other individuals, myself included, it is clear that DNC now stands for Desperately Need Cash.

The DNC’s entire complaint is nothing but a left-wing conspiracy theory, dressed up as a lawsuit. It is based solely on conjecture, supposition and speculation. It is, at the same time, devoid of any actual proof or evidence that the DNC was hacked at all, much less by Russian intelligence agents, or that anyone named as a defendant ever had anything to do with the supposed hacking they cannot even establish with real evidence.

This lawsuit is bogus, baseless, and meritless – offering no hard proof to back up their fantasy that I conspired with a group of others to collaborate with the Russians to hack the DNC and give the fruits of that hack to Wikileaks. This is nothing but a fairy tale, a hoax, a canard, a malicious abuse of legal process to sate the Democrats’ unhinged partisan animus.

The crux of the lawsuit is the claim that DNC information systems were hacked by the Russians, yet rather than contact law enforcement, rather than let the FBI forensically examine their allegedly-compromised systems, the DNC immediately brought in their own hired gun called CrowdStrike, a partisan private vendor, who then unsurprisingly served up the convenient story of a Russian hacking operation.

Former CIA experts like Bill Binney and Ray McGovern examined the basic data available about the copying of DNC data and concluded that there is more forensic evidence that the material was downloaded to a portable drive, meaning it had to be someone with physical access to DNC computers, i.e. inside their offices, and secreted out the back door, than there is to support any claims of hacking.

It is quite simple, really. The transfer speeds logged for the data extractions in question were entirely too rapid to have been accomplished over an external connection to the network via the internet, which is admittedly the only way any external actor (the Russians or otherwise) could have accomplished the deed.

It is this critical deficiency in the DNC’s core hacking claim that highlights where and how their lawsuit will not only fail, but will actually backfire on them…and badly. Having made their computer systems the subject matter of multi-million dollar demands for judicial relief, the DNC has now exposed them to the discovery process.

My lawyers and I will demand to examine the DNC’s servers and expose them to real forensic analysis, not merely accepting the claims of the DNC’s paid contractor, to finally extinguish this bogus Russian hacking claim, once and for all. My lawyers have served the DNC with standard pre-discovery notice directing the DNC of their obligation under law to preserve all possible evidence, including their servers, for ultimate inspection and exposure to critical review. As Julian Assange wrote on Twitter, via the WikiLeaks feed, “Discovery is going to be fun.”

Aside from this obvious problem the DNC has brought on itself, one might wonder why unhinged bulllschiff-peddler Tom Perez, the endlessly-hostile flim-flam artist who now chairs the broke, money-hungry DNC, took it upon himself to flush an untold chunk of the $5M loan the DNC secured in March, in order to keep from having to close its doors, to file some 66-page lawsuit, which hovers somewhere between wishful thinking, defamation-by-litigation and straight-up paranoid fantasy.

Notwithstanding the particular version of bizarre Russia collusion conspiracy theory cobbled together by Perez and his lawyers their abusive junk lawsuit, the whole thing is basically a cut-n-paste job from the same pile of unsupported, exaggerated garbage that the phony Obama leftist lawyer front group grotesquely called “Protect Democracy” filed against the Trump Campaign and myself last July.

Both of these harassment actions make it clear that Democrat degeneracy, desperation and delusion have reduced them to outright abusing our justice system as their latest illegitimate tool to launch costly political attacks on opponents who they have failed miserably and repeatedly to defeat at the ballot box.

Just like the Obama lawyer lawsuit, the DNC’s complaint barely pretends to proffer any actual evidence, much less proof, to support its deranged allegations and claims. In fact, the complaint relies almost entirely on sympathetic “news media” reports scrupulously footnoted at the end of the document, as its only discernible basis.

Of course, we all know that the “news media” never get it wrong, are always reliable, error-free and, above all, objective and unbiased, certainly the stuff on which one would think to commence a multi-million dollar litigation assault against your political opponents. [Hopefully my sarcasm here is thick enough for even braindead leftists to detect.]

This lawsuit is just the latest among many examples of the Democrats’ unflinching resort to abusing institutions of our government for their cheap partisan chicanery and nefarious scheming. It should come as no surprise to anyone. After all, the megalomaniacal Obama Democrat junta, colluding with the Hillary Clinton corruption juggernaut, hacked the unparalleled surveillance powers of the national security police state, wielded by our federal intelligence “community” and the FBI, for use as their very own political spying machine. Their criminal deeds make the Watergate “plumbers” look like an overly-ambitious grade school A/V club.

While the Democrats’ Department of Ambulance Chasers, lustily amplified by their obeisant mainstream media megaphone, are busy endlessly-recycling the same worn-out, discredited fake news stories and long-debunked accusations about Russian collusion, the truth is finally beginning to emerge about this unprecedented Obama-Clinton-FBI-NSA corruption of power to target their numerous political enemies.

We now know that some of the highest officials of the Obama regime, as well as intelligence and law enforcement agencies, criminally abused the most sensitive possible national security powers to spy on a major party presidential candidate and his campaign, during and after the election, using a salacious “dossier” they had fabricated in collusion with foreign spooks, paid for by Hillary Clinton herself.

Let’s not forget that at the heart of this Democrat lawsuit is their core claim that the exposure of genuine documents created by the hands of their own top officials, revealing to the American people the horrible truth about how ruthless and cynical the Democrats, Hillary Clinton and her henchpeople really are, is considered BY THEM to be so damaging that it effectively torpedoed the Democrat party’s multi-billion-dollar efforts to install the single most sleazy corrupt brazen criminal to seek the presidency since Lyndon Baines Johnson.

Contrast this with the purely-fabricated, now-debunked “dirty dossier” trash that Democrats colluded with Russian agents to concoct against Donald Trump. After crafting this grotesque fiction, the Clinton-Obama Federal Mafia immediately used it as a pretext to commit their seditious crimes against our democracy, our political process, a duly-elected U.S. president, his administration and the American citizenry itself.

Through criminal partisans in the DOJ and FBI, loyal to the Obama-Clinton Crime Cabal, they undertook to manipulate secret national security proceedings before the Foreign Intelligence Surveillance Act (FISA) court to illegally obtain warrants to commence a Soviet-style spying operation on Donald Trump and his campaign.

But these Obama-Clinton Democrat sleaze-peddling saboteurs didn’t have to hope for a WikiLeaks or some other journalistic organization to release their fabricated handiwork to the public to embarrass Donald Trump. They simply had the Director of the CIA, the deceitful, bitter power-crazed liar John Brennan, do it for them, handing it out like candy on Capitol Hill, with the assistance of the equally bitter and power-mad presidential election loser Senator John S. McCain.

That is, of course, a whole ‘nother kettle of fish but it puts a finer point on how this lawsuit is just so much cheap partisan garbage. Hillary Clinton, Fusion GPS and their foreign agent Christopher Steele have had more involvement with the Russkies than even this fantasy legal complaint could possibly allege.

The DNC’s harassment legal action is, in summary, just a bunch of high-minded sounding bullshit, using buzzwords and ominous-sounding hyped up claims in the hopes that nobody will notice the truth — that it is all just a politically-motivated litigation smear campaign by degenerate partisans willing and ready to, yet again, abuse the justice system for their sordid purposes.

WHAT USEFUL PURPOSE DOES THE MSM SERVE?
Is Donald Trump sick of all the winning yet?