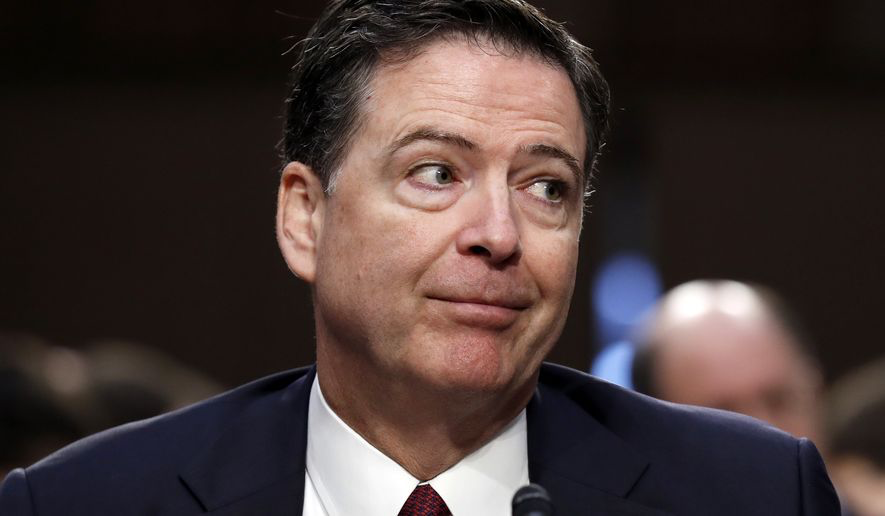 James Comey has serious criminal problems. I don’t care what anybody says, I know the law!

Any work product created by an FBI employee, Secret, not Secret, Top Secret, bottom Secret, in-between Secret or SAP belongs to the FBI. Any conversations between the President of the United States and the FBI Director is classified. Any notes of the conversation are the property of the FBI. Passing notes of your conversations to your mother, Comey, is a felony. Taking them home is a felony. You can have no personal notes involving any FBI interviews with anybody. If you spoke to Loretta Lynch about your grandkids and made notes about where to have lunch, that’s personal, those notes, as long as they have no FBI, DOJ, Presidential conversations or work product, can go in your safe, sock drawer or diary. If they include work product, then those notes do not belong to you, idiot!

A leak is when you intentionally provide FBI information to “anyone,” even another FBI employee, who has no need or reason to be aware of that information, or in the case of classified info, lacks the clearance to be aware of that info, for any reason except for official FBI business. So, Mr. Comey, what official FBI reason did you have to pass any FBI information to Daniel Richman, to give to the Washington Post or NY Times or any news paper? Since you were not an FBI employee, “at that time,” (your favorite phrase), you could not possibly have had an official reason to pass FBI info to anybody, hence, you are f—ed, Mr. Comey (FYI, that’s a semi-legal expression we used a lot in the FBI).

Also, who did the background investigation on Richman that led to his clearance?

James Comey is an attorney, and apparently, not a very good one. He is not, nor was he ever, an investigator. For him to make conclusive statements about what any good investigator would think after a year investigating a case is very presumptuous. How would he know? He never investigated anything. He only knew what the FBI told him and he took it to court. Second, any good investigator knows Hillary is guilty of multiple crimes. Comey and others have totally ignored Hillary’s Non-Disclosure Agreement. There is no way around what she agreed to in that agreement. She also acknowledged the crimes which she would be charged with for violating the agreement. Each violation of each document she disclosed/destroyed or otherwise violated, the agreement is a separate charge. It’s a no brainer, there is enough PC to charge her with enough violations to ignore all the other charges and put her in jail for the rest of this life and the rest of her 9 lives!

The money laundering, the lying under oath and on and on…if she had to make a choice between spending the rest of her life in jail and handing up Obama for, say the truth about Benghazi, what do you think she would do? How about jail or what was Obama’s involvement in the Judge Scalia death? Maybe, what did Obama do with the NSA, Clapper and Brennan, Comey to use the FISA court to monitor Trump, and other citizens? What would Hillary do?

Mr. Comey, my advice to you is to put together what you can give your old employer, Mr. Trump, on bigger fish like Lynch, Holder, Rosenstein, and the big fish, Obama. Then have your lawyer do a proffer of what you have to offer. That’s your only salvation. Or, give my law firm Dewey Screwum and Howe a call, they’re pretty cheap!