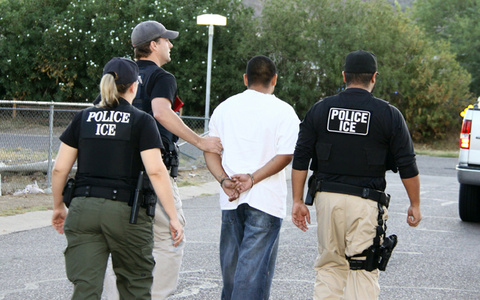 An open borders group that has benefitted from U.S. taxpayer dollars and is funded by leftwing billionaire George Soros launched a smartphone application to help illegal immigrants avoid federal authorities.

The app, Notifica (Notify), is described in a Laredo, Texas news article as a tool to protect immigrants living in the U.S. illegally by utilizing high tech and online social communications. With the click of a button, illegal aliens can alert family, friends and attorneys of encounters with federal authorities. “Immigration agents knocking at the door?” the news story asks. “Now, there’s an app for that, too.”

The group behind the app is called United We Dream, which describes itself as the country’s largest immigrant youth-led community. The nonprofit has more than 400,000 members nationwide and claims to “embrace the common struggle of all people of color and stand up against racism, colonialism, colorism, and xenophobia.” Among its key projects is winning protections and rights for illegal immigrants, defending against deportation, obtaining education for illegal immigrants and acquiring “justice and liberation” for undocumented LGBT “immigrants and allies.”

Illegal aliens encounter lots of discrimination, which creates a lot of fear, according to United We Dream. “We empower people to develop their leadership, their organizing skills, and to develop our own campaigns to fight for justice and dignity for immigrants and all people,” United We Dream states on its website, adding that this is achieved through immigrant youth-led campaigns at the local, state, and federal level.

United We Dream started as a project of the National Immigration Law Center (NILC), according to records obtained by Judicial Watch. Between 2008 and 2010, NILC received $206,453 in U.S. government grants, the records show. The project funded was for “immigration-related employment discrimination public education.” Headquartered in Los Angeles, NILC was established in 1979 and is dedicated to “defending and advancing the rights of immigrants with low income.”

The organization, which also has offices in Washington D.C. and Berkeley, California claims to have played a leadership role in spearheading Barack Obama’s amnesty program known as Deferred Action for Childhood Arrivals (DACA), which has shielded hundreds of thousands of illegal aliens from deportation. “Ultimately, NILC’s goals are centered on promoting the full integration of all immigrants into U.S. society,” according to its website.

Both the NILC and its offshoot, United We Dream, get big bucks from Soros’ Open Society Foundations (OSF). In fact, both nonprofits list OSF as a key financial backer. In the United States Soros groups have pushed a radical agenda that includes promoting an open border with Mexico and fighting immigration enforcement efforts, fomenting racial disharmony by funding anti-capitalist black separationist organizations, financing the Black Lives Matter movement and other groups involved in the Ferguson Missouri riots, weakening the integrity of the nation’s electoral systems, opposing U.S. counterterrorism efforts and eroding 2nd Amendment protections.

Just last week Judicial Watch published a special investigative report that exposes in detail the connection between U.S.-funded entities and Soros’ OSF to further the Hungarian philanthropist’s efforts in Guatemala. The goal is to advance a radical globalist agenda through “lawfare” and political subversion, the report shows.

Last year Judicial Watch exposed a joint effort between the U.S. government and Soros to destabilize the democratically elected, center-right government in Macedonia. Records obtained by Judicial Watch in that investigation show that the U.S. Ambassador to Macedonia worked behind the scenes with OSF to funnel large sums of American dollars for the cause, constituting an interference of the U.S. Ambassador in domestic political affairs in violation of the Vienna Convention on Diplomatic Relations.

The cash—about $5 million—flowed through the State Department and USAID.
While you’re here, we have a favor to ask…

More Americans than ever are depending on Judicial Watch for important news about government corruption and the fight for transparency.  And unlike some organizations we don’t accept advertising, or government funding.  So you can see why we need to ask for your financial help.  Judicial Watch’s unique brand of investigative work brings all of us that much closer to the high standards of ethics and morality that we, as Americans, all deserve. So, please give as generously as you can. Thank you!