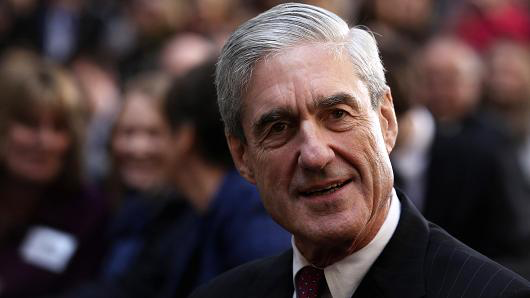 If I were the president’s attorney, I would ask the Mule Team, “What violation(s) of US law do these questions pertain to, Titles and Sections of U.S. Code?”

Also, I would note that most are protected by Executive Privilege, conversations between the president and his employees, thought processes of the president, and Article 2 of the US Constitution and should not be answered. Others are things alleged from so long ago that the president probably has no recollection.

It is my opinion, and I would think the President’s opinion, that Mueller, as former FBI Director and current Special Prosecutor, has knowledge of FISA Court abuses, lies and leaks…crimes that the President is looking into. Crimes that are of much more significance than anything Stormy Daniels or her attorney have to say, that Mueller seems to be mesmerized by.

As Chief Law Enforcement Officer, the President is required, by law, to determine whether or not the Special Prosecutor has been involved in FISA Court abuses, misprision of felonies, civil rights violations of U.S. citizens, political corruption, and/or conspired with others in so doing. The president must determine if the continued expenditure, by Mr. Mueller, of millions of taxpayer dollars, is worth the potential return. The President needs to also determine whether or not the SP should be allowed to continue with his current, very questionable, course as a Special Prosecutor, based, in part, on the apparent total lack of a foundation in law for any of the proposed above mentioned questions!

It appears that Mr. Mueller has either ignored the law or abused the law, by strong arming citizens who committed no substantive crimes other than being forced into “lying” to Mueller.

The President must believe that the amount of time, money, and freedom without interference from the Executive that the SP has had is sufficient for the SP to have been able to produce PC of a Crime, if there were any. According to all information available to the President to date, there simply is no evidence that the president was/is in any way involved in any crime, as was reported to him by the former FBI Director James Comey, stating that Trump “is not” the subject of an FBI investigation.

Also, the longer the President allows this to go on, allowing DOJ to be led recklessly by Rod Rosenstein, the worse it’s going to get. The reason is, Mueller is NOT interested in enforcing any Rule of Law; his sole purpose is extremely clear, especially with the absurd questions he proposes. He is going to unseat President Trump. Mueller is more concerned about whether the President had an affair with Stormy Daniels, 6 years ago, and lying about it, than he is about the President negotiating an arms agreement with North Korea, and Iran, destroying what’s left or ISIS, bringing real criminals like Bill and Hillary Clinton and others to justice. Is this guy screwed in the head or what?

Talking to a Russian is not a crime. Lying about it to the FBI may be a crime, but if I ever charged someone, like a decorated former General, with lying to me about doing a non-substantive, non-criminal act, I should be shot. If we arrested everybody who lied to us real Agents , Mr. Mueller, there would be no one left to charge with substantive crimes!

Remember, the Mule’s supervisor, Rod Rosenstein, who appointed him to SP, is the same guy who told the President to fire Comey. Now, Rosenstein is letting the Mule pursue an Obstruction of Justice investigation against Trump for firing the guy Rosenstein said to fire!

Mr Mueller what the hell is the crime the President is trying to Obstruct?  It gets better. Rosenstein deceived the FISA court when he signed FISA court wiretap documents on Carter Page when Rosenstein failed to disclose that the Dossier, that is the basis for the application, was financed by Hillary Clinton AND the Dossier contains information that was obtained from Russian officials, by Fusion GPS, paid by Clinton to influence the Presidential Election, favoring Hillary Clinton. There’s the “Collusion” the Mule team is looking for!

Hey, Mueller! Look, I found it! I found the “Collusion”! The only trouble is that there is NO FREAKING CRIME CALLED COLLUSION! There is no crime for attempting to peacefully, influence a presidential election; it’s called campaigning.

Mueller, you really need to go through a NEW Agents class if you want be an Agent.

Lying about being unfaithful to your wife is not a crime. The President firing ANY employee is not a crime according to Article 2 of the Constitution.

Do you get the difference?

Mr. President, a simple, necessary, legal, justified, and mandatory action by you stops ALL this. Suspend Rod Rosenstein and the other employees who signed the Page FISA warrants, now! And don’t let Sessions appoint Rosenstein’s replacement!

Click here to post a comment
Analysis: Initial Consent to “Life-Coaching” and Self-Help is NOT Consent to Coerced Sex and Branding
Limited Net Neutrality Effort Could Hurt Latinos, Others