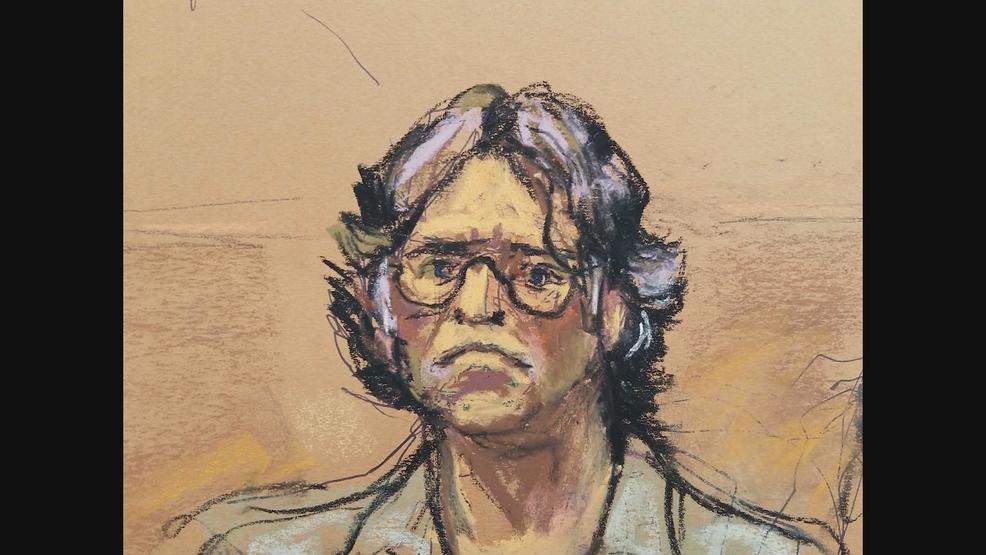 Allison Mack arrived early at the federal courthouse in downtown Brooklyn, escorted by her lawyers. She wore black pants, a wine-red blouse and a black cardigan. Her ankle monitor could not be seen.

Mack was released last month from federal custody on $5 million bail. She is living with her parents in Los Alamitos, California and flew to New York for this pretrial status conference.

She and codefendant Keith Raniere pleaded not guilty to charges of sex trafficking and conspiracy to commit forced labor last month. They face 15 years to life.

As they waited for Judge Nicholas Garaufis to appear, Allison sat in back of the courtroom. She was staring blankly, blinking a lot. She had her hands in her mouth. She looked down. Her shoulders moved. She smiled. She chatted quietly with her lawyers. She laughed, but it was a silent laugh.

As the time drew near for the judge to arrive, she rose and with her attorneys came in front of the bar and sat at the defense table.

Outside the court, Raniere could be heard being unshackled. He is held without bail at the Metropolitan Detention Center in Brooklyn. He entered, wearing a brown prison jumpsuit. His hair shaggy. His face expressionless. He appeared not to have bathed, although he was clean shaven. His face was beet red.

Mack looked at him in the corner of her eye. 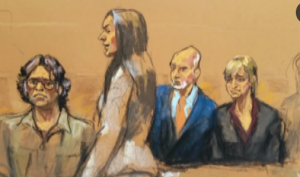 He sat down next to his lawyers, two chairs from Mack at the defense table. She looked nervous and shaken. Raniere had his mouth open, focusing on the judge and lawyers. She gazed at the floor except when looking up at the judge.

Raniere looked in Allison’s direction as her lawyer talked. While the judge was talking, he leaned back and attempted to look in her eyes. She did not make eye contact.

Raniere’s attorney demanded speedy trial. The judge declined saying Mack tolled speedy trial and Raniere is bound since she is a codefendant.

Raniere looked red faced and angry. After all, Raniere might have thought: ‘She is my slave and she is dictating the pace of this trial while I rot in prison!’

Prosecutors alleged they needed time. They had a “large amount of discovery,” in part the fruit of raids of Raniere’s ‘sex lair’ and the home of NXIVM cofounder, Nancy Salzman.

Investigators found, they said, an “enormous amount of electronic evidence” including “years’ worth” of alleged victim material from seized computers, electronic devices and email accounts.

Raniere looked red-faced angry when the prosecutor said there is no amount of bail that would satisfy them. Raniere is dangerous, has foreign ties and access to enormous amounts of cash, they said.

The judge said Raniere’s defense team could make a bail package application. He looked grim, as he said, “these are very serious charges”.

Raniere turned to look at Toni Natalie and gave her a snarl.

Mack’s lawyer asked to waive the requirement for her to personally appear at each status conference. Mack has to come from California for every hearing, most of which last half an hour at best.

The judge said,  “I am not sure I am comfortable with the fact that she is 2500 miles away. I don’t generally grant a waiver. This is a very serious matter,” but nevertheless he gave her defense leave to make a motion for her waiver of appearance.

Before it ended, Asst. US Attorney Moira Penza said the prosecution was “anticipating there will be additional charges and defendants” in a superseding indictment which could come in a month or so.

As she walked out of court, Mack smiled and said, “thank you” to Raniere’s lawyers.

Raniere left the courtroom to be handcuffed and shackled and returned to prison.

After she left the courthouse, neither Mack nor her legal team made comment. She walked, flanked by her attorneys – surrounded by reporters – to a limousine waiting for her. 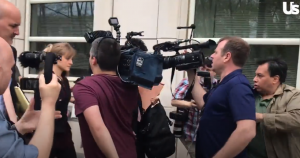 Outside the courthouse, lawyers for Raniere told reporters they were happy Judge Garaufis set a date for trial though they hoped it would be sooner.

They were eager to go to trial, to give his side of the story.

Raniere attorney, Paul DerOhannesian said, “It’s still the United States of America and adults can engage in sexual relationships if they consent to them. I think what you’re going to see is these were consenting adults who knew what they were doing and approved of it – and I think that’s at the core of the sexual allegation in this matter.”

“I do not see Mr. Raniere pleading guilty,” said attorney Marc Agnifilo. “He has no reason to plead guilty. We will have a very vigorous defense and I predict that we will prevail after a trial in this case.”

Asked about rumors that Allison Mack will accept a plea deal in exchange for testifying against Raniere, Agnifilo said, “I’m not concerned about anything that is not the truth. The truth is on our side. I think that when the allegations are actually meant to be proven in court they will not be proven in court.”

When asked about the branding, he replied, “I’m not qualified to say what is normal. There are well-known groups of men that brand themselves. It’s utterly uncontroversial. But a group of women decide to brand themselves and then all of a sudden we assume that they’re victims.

“A lot of adult, strong-minded, free-willed women made decisions for their own lives and made their own choices. That’s what the evidence is going to show.… The case boils down to whether jurors believe witness testimony.  At the end of the day, this is a case about consent.”

He said he’d seek bail for Raniere in the coming weeks.

Outside the courthouse, reporters spoke to Toni Natalie.

“For me to see him held accountable, it’s pretty important,” she said.

She said she was pleased that more indictments were coming.

“There’s so much more,” she said. “This is literally the tip of the iceberg.”

“Justice looks like the rest of the people that have helped him to facilitate this go to jail also. This snake has more than one head,” she said.

As for Mack, Natalie said, “I think Allison should be held accountable for her actions. You get to a certain point where there’s culpability. I don’t think anyone goes into NXIVM and comes out the same way.”