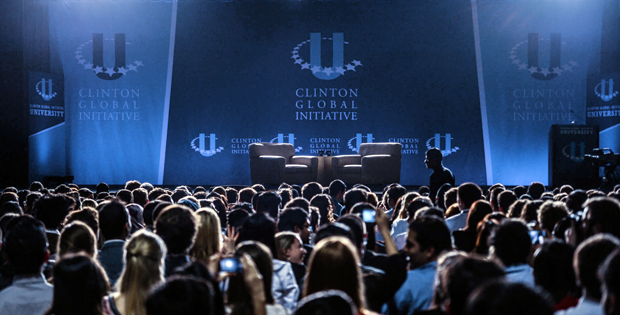 Recently, Bill, Hillary and Chelsea Clinton invited their followers to a reception in New York City for which contributions ranging from $2,500 to $100,000 will be graciously accepted.

Of course, she never went away. Micah Morrison, our chief investigative reporter, has even more of the Clintons’ doings in his Investigative Bulletin.

The summons from Chelsea Clinton came via email, an invitation to “be the change.”
“I am so excited about the Clinton Global Initiative University,” Chelsea wrote. In October, student leaders from “CGI U” will converge on Chicago, working on “projects big and small to address climate change, poverty, gender inequality, and other pressing issues facing their generation — and all of us.” The email provided four opportunities to donate to the Clinton Foundation. “None of this great work would be possible without you and your continued support.”
In January 2017, the New York State Labor Department issued a statutory notice that the Clinton Global Initiative—the annual glitterati schmooze fest that brought hundreds of millions of dollars into Clinton coffers—would be laying off twenty-two employees. The news went out: CGI was dead. Hillary would not be president; the gravy train had run out of steam. The Clintons closed up shop.
But in fact, reports of the death of the Clinton Global Initiative were greatly exaggerated. It continues in a kind of zombie afterlife, along with other Clinton Foundation efforts, including CGI U. “Building on the successful model of the Clinton Global Initiative,” the Clinton Foundation website says, “President Clinton launched the Clinton Global Initiative University in 2007 to engage the next generation of leaders on college campuses around the world.”
Mr. Clinton made a fortune from CGI U. His early partner in the project was the for-profit university system, Laureate Education. Laureate donated between $1 million and $5 million to the Clinton Foundation and signed Mr. Clinton up as “honorary chancellor” in 2010. Over the next five years, Laureate paid Mr. Clinton more than $17 million. That’s when Mrs. Clinton was Secretary of State and gearing up her presidential run. Laureate was controlled Doug Becker, a big Democratic donor. Becker stepped aside as CEO in 2017 with a $23 million package after taking the company public.
What does an honorary chancellor do to earn $17 million? Laureate told CNN that Mr. Clinton “inspired” people. The State Department stonewalled Judicial Watch’s attempt to uncover more details, eventually producing a heavily redacted contract that blacked out descriptions of the former President’s role. Laureate lately seems to have been shoved down the memory hole—it does not appear in current CGI U promotional material and both the Clinton Foundation and Laureate did not respond to requests for clarification. But Chelsea Clinton is carrying on the work. “We’re here with one of the most remarkable world leaders,” a Laureate student said in a video interview at a CGI U event reported by the Washington Post. “We’re here with Chelsea Clinton.”

The Clinton cash machine continues churning and you can bet there will be more attendant corruption!