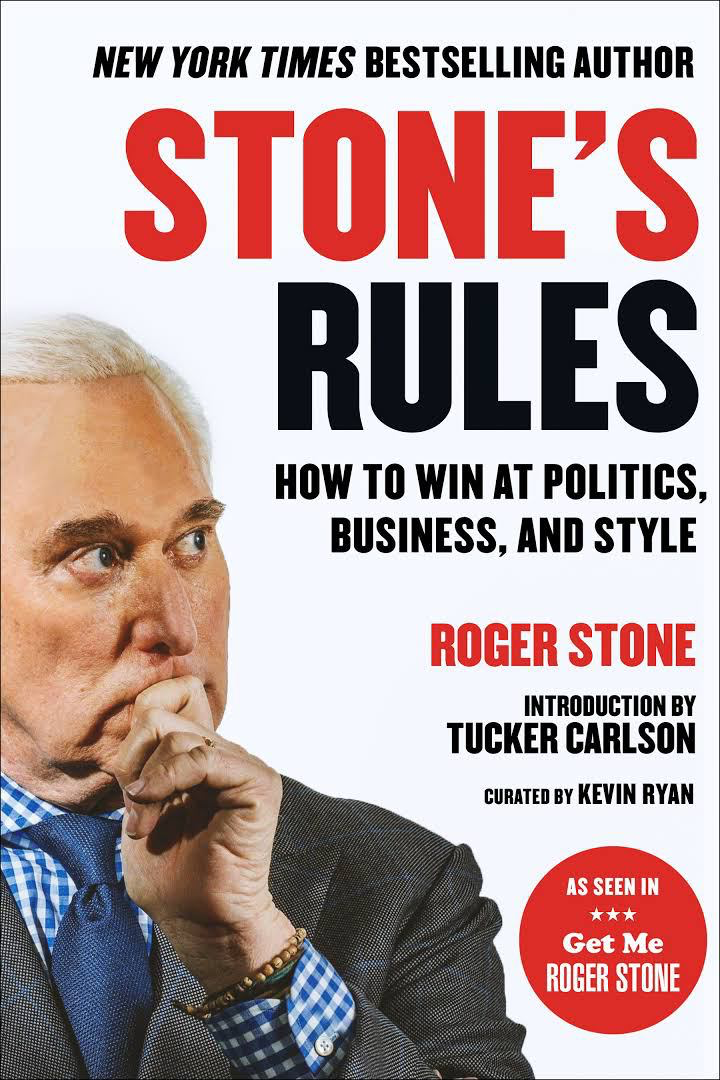 Tuesday, May 8th, 2018 might as well be your birthday. For at long last, America’s most notorious political operative is set to release his famed operating manual to you, the people.Stone’s Rules: How To Win At Politics, Business, And Style.  Rejoice and be glad in it… 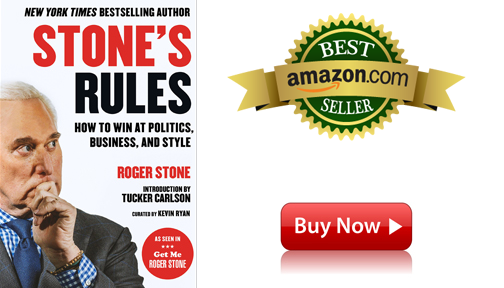 ROGER STONE , the flamboyant, outrageous, articulate, and extraordinarily well-dressed operative-pundit has laid out Stone’s Rules—the maxims that have governed his life and legendary career as a campaign operative for four American presidents, including Richard Nixon, Ronald Reagan, and Donald Trump.

“Friends and supporters ask me constantly how I combat and survive the constant recycled but false claim of Russian collusion in the 2016 election and the endless smears, personal attacks and innuendo of an insidious group of relentless partisans and their hand-maidens in the fake news media. The answer lies in my disciplined adherence to Stone’s Rules, a time-tested compendium of maxims and guidelines I have developed over a stunningly successful 40-year career of political combat, survival and Victory. Now you can read and employ these vital and current rules for yourself. Consider it a gift from me to all who do not fall into the category of bitter losers,” said Stone, (quoting himself from the blockbuster 2017 documentary Get Me Roger Stone).

As a raconteur, pundit, prognosticator, and battle-scarred veteran of America’s political wars, Roger Stone shares his lessons on punking liberals and playing the media, gives an inside look at his push to legalize marijuana, details how much “linen” to show at the cuff of an impeccably-cut suit, lays out how and why LBJ orchestrated the murder of JFK, and reveals how to make the truly great marinara sauce that is the foundation of Stone’s legendary Sunday Gravy. And that’s not the half of it.

Along the way, Stone dishes on the “cloak and dagger” nitty-gritty that has guided his own successes and occasional defeats, culminating in the election of the candidate he first pushed for the presidency in 1988, Donald J. Trump.

First revealed in the Weekly Standard by Matt Labash and commemorated by CNN’s Jeffrey Toobin, the blunt, pointed, and real-world practical Stone’s Rules were immortalized in the Netflix smash hit documentary Get Me Roger Stone—part Machiavelli’s The Prince, part Sun Tzu’s The Art of War, all brought together with a highly-entertaining blend of culinary and sartorial advice from the Jedi Master of political dark arts.

From “Attack, attack, attack!” inspired by Winston Churchill, to “Three can keep a secret, if two are dead,” taken from the wall of mob boss Carlos Marcello’s headquarters, to Stone’s own: “It is better to be infamous than to never have been famous at all,” Roger Stone shares with the world all that he’s learned from his decades of political jujitsu and life as a maven of high-style. From rules for campaign management to the how-to’s of an internet mobilization campaign to advice on custom tailoring to the ingredients for the perfect martini from Dick Nixon’s (no-longer-) secret recipe, Stone has fashioned the truest operating manual for anyone navigating the rough-and-tumble of business, finance, politics, social engagement, family affairs, and life itself.

“Roger’s a good guy. He is a patriot and believes in a strong nation, and a lot of the things that I believe in.” —President Donald J. Trump.

“Stone has been a colorful and at times maligned figure in the Republican Party who relishes political combat and playing a role in causing or exposing unseemly scandals.” —Washington Post.

“We are living in the age of Stone. Indeed his journey from a Dick Nixon ‘Dirty Trickster,’ to Donald Trump’s man in the trenches, does roughly mirror the trajectory of the American right.” —Variety.

“Stone is one of the best known—and best dressed—political insiders in New York.” —Breitbart.com.

“Watching Stone is like watching a well-dressed cobra at rest.” —Esquire “Possibly The Most Dangerous Man In Politics.” —MSN.com.

“Trump without Stone is akin to George W. Bush without Karl Rove or Barack Obama without David Axelrod.” —National Review.

“What makes Stone such a tour de force is his ability to impact the campaign of both candidates.” —Redstate.com “Stone is one of the best sources in Washington for ‘inside dirt.’” —Slate.com.

COMING SOON TO A FESTIVAL NEAR YOU
The Process of Making Diamonds from Human Ashes: A Post-Burial Option more and more adopted in the USA, Canada and Mexico.
Comment