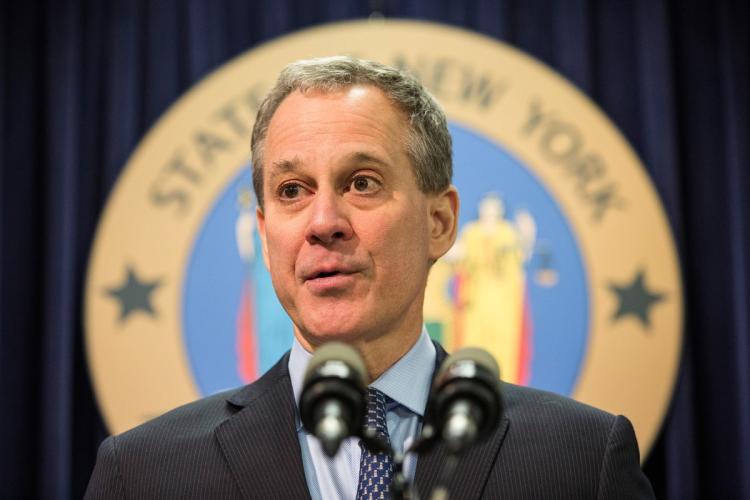 A criminal investigation is indicated. A special prosecutor is indicated to examine Schneiderman’s prosecution and his relationships with women.

It is said his hasty resignation is based not only on the four known accusers but that several other women are coming out of the woodwork.

Ronan Farrow and Jane Meyer outed the lout in the New Yorker. https://www.newyorker.com/news/news-desk/four-women-accuse-new-yorks-attorney-general-of-physical-abuse

The volcanic temper, the humongous ego, the guy who threatens anyone who dares stand in his way, has been using the color of law to get enemies for years. He was above the law for years.  He appears to have gotten his comeuppance at last.

First a synopsis of the New Yorker story:

New York State’s highest-ranking law-enforcement officer faces accusations of four women who say he was physically violent with them.

Michelle Manning Barish and Tanya Selvaratnam were named in The New Yorker story.

One night, in the bedroom of his Upper West Side apartment, he backed Manning Barish up to the edge of his bed and “slapped me, open handed and with great force, across the face, landing the blow directly onto my ear … . My ear was ringing. I lost my balance and fell backward onto the bed. I sprang up… he pushed me back down. He then used his body weight to hold me down, and he began to choke me. The choking was very hard….  I was being beaten by a man… I was crying and in shock.”

Schneiderman accused her of scratching him. He told her, “You know, hitting an officer of the law is a felony.”

Manning Barish says her ear bothered her for months. She kept hearing odd gurgling sounds. Once, blood trickled out, reaching her collarbone.

Manning Barish sought medical help and the doctor confirmed to the New Yorker that she removed “dried bloody crust” from Manning Barish’s ear.

Manning Barish said Schneiderman often slapped her across the face. He  “controlled what I ate.” Manning Barish is five feet seven. She lost thirty pounds, falling to 103. She became emaciated; her hair started to fall out. Nevertheless, he squeezed her legs and called them “chubby.”

Manning Barish says Schneiderman would drink two bottles of wine then bring Scotch to the bedroom. He took prescription tranquilizers.

Sometimes in bed, he would be “shaking me and grabbing my face” demanding she repeat “I’m a little whore.” He told her, “If you ever left me, I’d kill you.” “’I am the law’” Manning Barish says Schneiderman told her.

In 2016, he took a female lawyer to a house. They started making out. He told the woman, “Yeah, you act a certain way and look a certain way, but I know that at heart you are a dirty little slut. You want to be my whore.” He became sexually aggressive. He slapped her across the face so hard the blow left a red handprint. She screamed, and started to sob. She told him she wanted to leave.

“You’d really be surprised,” he told her. “A lot of women like it. They don’t always think they like it, but then they do, and they ask for more.”

She demanded to be taken home. They got in his car. It became apparent how intoxicated he was. He drove, weaving along back roads. She was terrified he’d kill her and maybe another driver.

Schneiderman slapped her across the face, back and forth, with open hand, spat at her and choked her. She often asked him to stop hurting her, and tried to push him away.

“He had said he would have to kill me if we broke up, on multiple occasions. He also told me he could have me followed and could tap my phone,” she said.

Selvaratnam ended the relationship. She suffered from ringing in her ears, and vertigo. After the breakup, she sought medical help from an ear, nose, and throat specialist.

The former girlfriend wrote down an account of the abuse, locked the document in a safe-deposit box, and gave keys to two friends in case anything happened to her.

There is more to this story not yet reported. More women will likely come forward. The man is a bully. He also used his political and legal authority to go after political enemies and cover for those who were his allies.

Kristy Mazurek was a victim of the ruthless former State Assemblyman Dennis “Grab and Go” Gabryszak.  Kristy and five other women – also victims – went to Schneiderman to investigate. The attorney general covered it up.

“I don’t think it is a coincidence that I and other women who dealt with sexual harassment never got our day in court because Eric Schneiderman protected others like him,” she said.

In the case of Albany cult leader Keith Raniere, despite multiple complaints by numerous women over the course of years – women who claimed they were abused by Raniere and his sex slaver cult of NXIVM, Schneiderman seems to have ignored or covered up crimes of the notorious brander and starver of women. One can see why: He liked to beat and starve women himself.

Yet Schneiderman was at the forefront of the #me too movement. Isn’t it always the most sanctimonious of assholes who are the greatest closet offenders?

There are more incidents to relate. How we went after political enemies like George Maziarz, and Rob Ortt.

Ortt’s case was dismissed post indictment.  He also indicted Maziarz, who had participated in a political coup against him when Schniederman was a state senator in 2009. He had threatened to destroy Maziarz but could not do it politically so, when he became attorney general, he used the color of law to indict him on a raft of bogus felony charges. Maziarz wound up with a misdemeanor election violation and $1000 fine. But his life and career were nearly destroyed.

Then there is Steve Pigeon who helped engineer the State Senate coup in 2009 when Schneiderman got overthrown as Deputy Speaker of the Senate. Schneiderman vowed vengeance. There was nothing he could do until be became Attorney General. Then using the color of law, he went after Pigeon and indicted him on bogus charges that can never be proven.

But that did not stop him from raiding Pigeon’s house and destroying his reputation and business.

At the time of the senate coup, Schneiderman was seen by three witnesses – who told Artvoice that he – then a state senator – was screaming and threatening Pigeon at the Marriott Hotel in Albany.

He probably would have slapped Pigeon except Pigeon, being a man, might have hit him back.

We will have more on this later. Stay tuned.