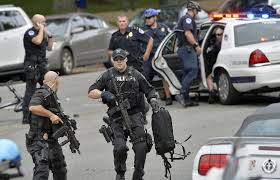 With National Police Week kicking off on May 13, the personal-finance website WalletHub today released its report on 2018’s Best & Worst States to Be a Police Officer.

WalletHub compared the 50 states and the District of Columbia [the seat of federal government] across 25 indicators of police-friendliness. The data set ranges from median income for law-enforcement officers to police deaths per 1,000 officers to state and local police-protection expenses per capita.

Among the facts of interest is evidence that wherever people are [or need to be] governed most, they suffer most. This is because fundamentally, government is nothing more than coercion. It is force.

As proof of this:

Best vs. Worst
The District of Columbia [arguably the most governed place in the world] has the most police and sheriff’s patrol officers per 100,000 residents, 779.96, which is 6.2 times more than in Oregon, the fewest at 125.31.

The District of Columbia has the highest state and local police-protection expenses per capita, $887.19, which is 5.9 times higher than in Kentucky, the lowest at $151.26.

To view the full report and your state or the District’s rank, please visit:
https://wallethub.com/edu/best-states-to-be-a-cop/34669/