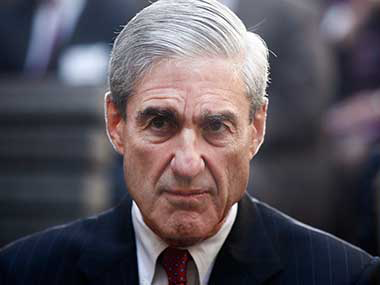 I understand that the President wants to clear his name with Bob Mueller’s “investigation” face to face. What he doesn’t understand is that he is at war with his hands tied behind his back, against people with no moral values. The law is completely on the side of the President, but the “losers” have shown him, beyond any doubt, they don’t care what the law says, besides, everything ”they” do … is secret, and they will do anything to get the job he has… anything.

There is no basis in the law for what the Mule is doing! When a Federal Judge asks him what his authority is to do this, and what is his foundation in law, the Mule says he can’t tell the Judge…it’s a secret! Something is wrong and it’s time to get a new Mule.

They, the losers, disregarded the law before the election with lies, cheating, stealing, organized disruption… they have no regard for anything. It’s so much like a child who can’t have their way and they are going to hold their breath, scream, stamp their feet until they get their way.

I simply cannot believe the total loss of honesty, disregard for the truth, hypocrisy, the losers show with no shame. Look at this piece of work we have in New York for a Senator…Schumer. He told the world, when Obama made the deal with Iran, that Schumer would not vote in favor of the deal…it is a bad deal for the US. Now, with no shame he tells the world, President Trump should not have killed the deal and will pay the price. Could it be possible to be anymore two faced than that?

In my opinion Barack Obama committed Treason many times in his 8 years of terror, all while the left and the MSM said nothing…it’s okay he’s Barack Obama. The worst Acts against the United States were when he gave the Muslim Brotherhood F16 Fighter Jets, and other munitions and then …gave Iran $180 billion, in cash. Iran, the biggest sponsor of terrorism in the world Iran…a Nation whose leaders have said repeatedly, “We will destroy you”, to America; Iran…the Nation that stabbed Jimmy Carter and America in the back, raided our embassy and kidnapped 52 US citizens and held them hostage for 444 days.. From the USS Cole, to the Marine barracks in Beirut, to mines in the Persian Gulf that our US ships hit and the Hezbollah attack on the Khobar Towers in Saudi Arabia killing 19 airmen. On and on to the point that the only terrorist group that has killed more Americans than Iran and their “proxies” is al Qaida, and that’s only because “they” killed 3,000 innocent Americans on 9/11!

It doesn’t matter what President Trump does, people without scruples, the losers, will NEVER acknowledge his accomplishments, never give him credit and never treat him fairly.

Mr President, you just don’t seem to understand. Mueller doesn’t care what you say he is only interested in catching you in a lie…a lie about ANYTHING. We in the FBI never investigated a person, searching for a crime. We investigated a crime. Mueller would have never allowed me to pick a citizen and “investigate’ and hound him, until I found a violation, yet, here we are and that is exactly what he is doing to the President of the US. Put an end to it by suspending Rod Rosenstein, it’s that simple!

Protect the Presidency by fighting back…follow what people like Joe De Genova and Rudy Giuliani and I advise you to do…don’t say, “Good morning”, to Bob Mueller, he’ll accuse you of lying.   DON’T DO IT!