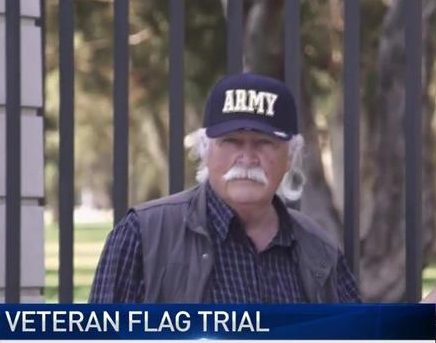 The Department of Veterans Affairs has a well-earned terrible reputation. Judicial Watch hasn’t ignored the damage that agency is doing to veterans and the rule of law:  case in point being our client Robert Rosebrock.

The U.S. District Court for the Central District of California has affirmed a U.S. Magistrate Judge’s April 11, 2017, dismissal of criminal charges against Mr. Rosebrock, who was prosecuted for allegedly taking “unauthorized” photographs of American Flags at an entrance to a park on the Los Angeles VA campus (United States of America v. Robert L. Rosebrock (No. 2:17-cr-00262)).  (For some background on Bob’s battles, click here for a moving video).

The magistrate judge ruled in Rosebrock’s favor on First Amendment grounds. The District Court affirmed the magistrate judge’s dismissal of the charges, but held that the plain language of the regulation under which Rosebrock was prosecuted did not prohibit unauthorized “news” photography anywhere on VA property.

The charges stemmed from allegations that Rosebrock took unauthorized photographs of American Flags and unauthorized videos of VA police on Memorial Day 2016 and Sunday, June 12, 2016. In rejecting the VA photography/video charges, U.S. Magistrate Judge Steve Kim ruled that the regulation as applied to the West LA VA’s Los Angeles National Veterans Park was not reasonable under even the most lenient First Amendment standard. Rosebrock also was acquitted after trial on April 18, 2017, of a further criminal charge for allegedly displaying a napkin-sized American Flag on a fence at the park’s entrance on Memorial Day 2016.

The VA refused to accept the magistrate’s ruling and appealed to the District Court. We argued VA officials sought to retaliate against Rosebrock for his long-standing criticism of the VA for what he considers to be violations of the terms governing use of the land on which the West LA VA facility is located.

Since 2008, Rosebrock and a small group of supporters have assembled nearly every Sunday and Memorial Day at the Great Lawn Gate entrance to the Los Angeles National Veterans Park to protest the VA’s failure to make full use of the property to benefit veterans, particularly homeless veterans. For years, the VA has allowed land on the campus to be used for a variety of non-veteran related purposes, including a baseball stadium for the University of California Los Angeles baseball team, athletic fields for a private prep school, and a City of Los Angeles dog park.

Although the District Court did not address VA officials’ motives in pursuing criminal charges against Rosebrock, its ruling lends credence to the claim that Rosebrock was selectively and vindictively prosecuted for his weekly protests. Further evidence of a retaliatory motive is the recent revelation of fraud high up at the Greater Los Angeles VA facility.

It’s clear: The VA persecuted Rosebrock for his advocacy and the outrageous criminal charges against him have since been shown to lack any factual or legal basis. President Trump should ask who at the VA and DOJ is responsible for this reprehensible effort to jail our client for exercising his First Amendment rights.