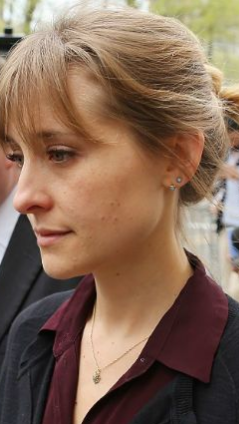 Informed sources tell me that offers of possible plea deals to lure Allison Mack into testifying against Keith Raniere, and sparing herself years in prison if she’s convicted, are falling on deaf ears.

Mack is holding on to her support of her slave master, Raniere, and is said to be prepared to go to trial to prove his innocence. She is a co-defendant with Raniere. Both are charged with sex trafficking and conspiracy to commit forced labor. They both face from 15 years to life in prison.

Mack’s parents, on the other hand, seem to have shifted from eager supporters of her cult involvement to now wanting to see their daughter move [mentally] away from supporting the cult that blackmails and brands women, and possibly avoid spending life in prison.

Allison is said to be reluctantly receiving help –a noted cult de-programmer has been retained by her worried family to try to rescue her from the thralldom of the cult. The results have been nil, sources tell me.

Allison is utterly resistant to the suggestion she was brainwashed.

This news runs counter to earlier reports that Allison was receptive to a plea deal. Her attorneys extended speedy trial deadlines ostensibly to enter into discussions about making a deal and avoiding trial.

To some observers, it appears Allison may have only feigned an interest in making a plea deal to get out of jail, ensuring she did not get undue opposition from DOJ prosecutors during the critical days when her attorneys sought the judge’s approval of a bail package for her. She is currently out on $5 million bond, under home detention and wearing an ankle monitor.

She is, by court order, forbidden to make contact with any member of NXIVM – including her wife – actress Nicki Clyne whom, I believe, she married in order for Clyne to obtain a “green card” and continue to work in the US for the cult. Clyne is Canadian.

Click here to post a comment
Special Prosecutor, Schneiderman, Cuomo, Hochul & Hochul and NXIVM – intertwined in the swamp?
Protecting the Office of the President [from the Mule]