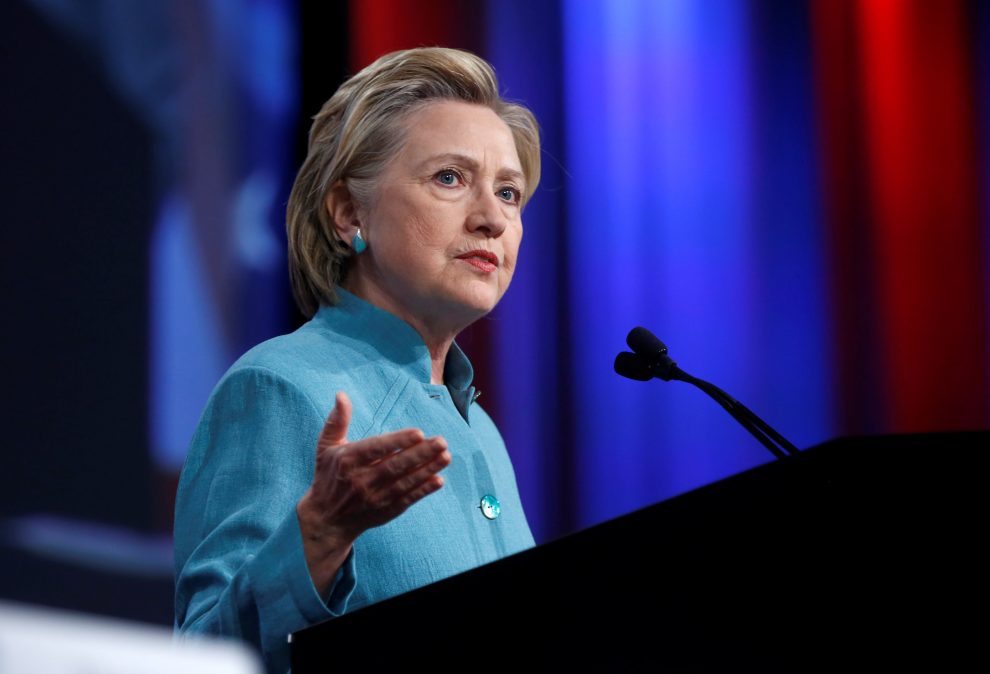 The upwardly mobile Clintons remind me of the leading characters in Shakespeare’s play, The Tragedy of Macbeth.

Heartless Hillary, of course, reminds me of Lady Macbeth. The essence of Lady Macbeth’s evil character is defined by her candid revelation concerning the ruthless steps that must be taken for her to become the Queen of Scotland: “Come you [evil] spirits that tend on mortal [deadly] thoughts, unsex me here, and fill me from the crown to the toe, top-full of direst cruelty. Stop up the access and passage to remorse, that no compunctious visitings of nature [humanity] shake my fell [ruthless] purpose…Come to my women’s breasts and take my milk for gall [hatred], you murdering ministers [spirits].” (Macbeth).

Lady Macbeth persuades her wavering husband, Macbeth, to murder the king, so that they can become the king and queen. The pair believes that the killing of the king will allow Macbeth to fulfill the prophecy that the three witches have made concerning his royal destiny. After the Macbeths murder the king, they go on to murder several more innocent people, in order to secure their hold on the throne. But things do not go well for the homicidal duo; Lady Macbeth eventually goes mad and kills herself, as their plans unravel. Finally, Macbeth is slain by Macduff, whose wife and children the Macbeths had murdered in order to maintain their power.

From an early age, it has been the single-minded ambition of both of the Clintons to become the President of the United States. However, Hillary knew that she could not accomplish this feat on her own; it would take more than a male version of her vicious self. Her plans required a charming, glad-handing, corruptible politician, “Slick Willy” Clinton, in order to succeed: “False face must hide what false heart doth know.” (Macbeth).

But Hillary didn’t anticipate just how difficult it would be to manage the threat that Bill’s womanizing would pose to both of their presidential ambitions. Bill once bragged to his long-time mistress, Dorothy Kyle, who wrote Hillary: the Other Woman, that he had had sex with nearly 2,000 women.

Thus, the burdensome task of political damage control from Bill’s sex-capades fell to his prime enabler, Hillary. She passed this task on to her martinet-like aide, Betsy Wright and to her hired goons, who threatened, destroyed, paid off, or just plain terrorized into silence the female victims of Bill’s sexual predations.

Hillary, that hypocritical defender of women’s rights around the world, responded to her husband’s sexploitations with vicious attacks on Bill’s female victims: “Look like the innocent flower, but be the serpent under it.” (Macbeth).

Meanwhile, Hillary was having her own lengthy love affair with Vince Foster, who reportedly stayed overnight with her at the governor’s mansion when Bill was away. Otherwise, they would nest at Vince’s cabin in the woods. The state troopers who guarded her were aware of Vince’s sleepovers at the mansion, as were the troopers who drove Hillary to Vince’s love nest for overnights. Some of the state troopers have spoken out publicly about the dalliances of these two love birds (Hillary &Vince, by Dean W. Arnold).

So, the aspiring Clinton couple settled into a macabre matrimonial arrangement: Bill would continue to indulge his sexual appetite by gorging himself on cheesecake, while a scorned Hillary would find solace and love from a surrogate husband. It’s really too bad that poor old Vince had to go and get himself killed. Vince Foster, the Clinton’s personal lawyer and the Deputy White House Counsel, was the guardian of many of the Clintons’ deepest and darkest secrets, many of which he would have been required to reveal, under oath, had he not expired under a dark cloud of contradictions, mysteries, and cover-ups (Vince Foster Murder Cover-up @fbicover-up.com).

Robert Morrow wrote a very engrossing article entitled, “Bill Clinton Sent His Arkansas State Troopers to Savagely Beat Gary Johnson in June 1992” (EconomicPolicyJournal.com). When Bill’s mistress, Gennifer Flowers, moved next door to Gary Johnson, she was unaware that the security camera that Mr. Johnson had installed to protect his condo inadvertently protected her condo, as well. As a result, Mr. Johnson’s surveillance camera was able to capture the numerous comings and goings of Governor Bill Clinton, who was using his own key, in and out of Ms. Flowers’ condo. After it was learned that Mr. Johnson had these tell-tale tapes of cheating Billy, a flying squad of Bill & Hillary’s storm troopers descended upon Mr. Johnson’s condo on June 26, 1992, to retrieve – only – the tell-tale Clinton tapes.

After these thugs had savagely beat Mr. Johnson, he gave them the tapes for which they had come. But that was not to be the end of it. These sadistic animals then commenced to beat him again, severely crushing his nasal cavity, breaking his collarbone, dislocating both of his elbows, and puncturing his spleen and bladder. They left him in a broken heap on the floor – to die. This attempted murder occurred two weeks before the Democratic National Convention. You can watch Gary Johnson tell his story on you tube @ Clinton Chronicles 2016.

A terrified Gennifer Flowers had already been driven out of her condo, at the time of Gary Johnson’s attempted murder. Her condo had been broken into several times, before it was finally ransacked. But Gennifer Flowers is not been the only victim of the Clintons’ War on Women. Search on Google for Sally Perdue, Kathleen Willey, Paula Corbin-Jones, Dolly Kyle, Christy Zercher, or Carolyn Moffet.

The ruthless Clintons would do well to consider the mournful words spoken by Macbeth, upon learning of Lady Macbeth’s suicide. “Out, out brief candle! Life’s but a walking shadow, a poor player that struts and frets his hour upon the stage and then is heard no more. It is a tale told by an idiot, full of sound and fury, signifying nothing.” (Macbeth).

Just as the evil Macbeths saw their world unravel and their dreams evaporate, so too have the amoral, shameless, and deviant Clintons.