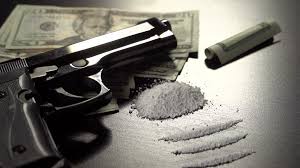 When the American Made movie was released last fall, the title had been changed from Mena to American Made. The movie is a dutifully sanitized version of some of the illegal smuggling activities of the CIA operative, Adler Berriman Seal (aka Barry Seal), who flew in and out of the Intermountain Municipal Airport, located in Mena, Arkansas, both when Bill Clinton was the Attorney General of Arkansas and when he was residing in the governor’s mansion in Little Rock, Ark. in the late 1970s and the 1980s. Tom Cruise plays the role of Barry Seal. 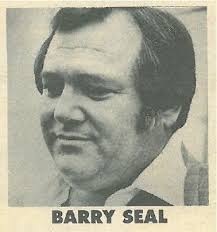 The article, The Crimes of Mena, by investigative journalists Roger Morris and Sally Denton, was spiked, without explanation, at the last minute in January of 1995, by the Washington Post’s managing editor and Skull & Bones’ member, Bob Kaiser, as the presses were literally set to roll. In the article, the journalists had written that “Arkansas state trooper Larry Patterson testified under oath…that he and other officers ‘discussed repeatedly in [Bill] Clinton’s presence’ the ‘large quantities of drugs being flown into the Mena airport, large quantities of money, large quantities of guns.” Bill Clinton was aware of what was going in Mena because he was a definite part of it. Roger Morris, who had been a member of LBJ and Richard Nixon’s National Security Councils, went on to write Partners in Power: the Clintons and Their America. In this book it is stated that “According to several official sources, Mena was not only the base for Barry Seal’s traffic in guns and drugs but also a hub in the clandestine network of [state &federal] government crime.” 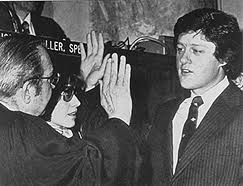 Mena was a major component in a larger operation that was known as the “Enterprise,” which was “composed of retired military and intelligence personnel, arms dealers, and drug smugglers.” (Elite Deviance, 8th edition, by David R. Simon). Its chief activities were gun-running, drug-smuggling, money-laundering, and contra-training.  It was directed, from the Reagan White House, by Vice President, George Bush, CIA Director, William Casey, and CIA career official, Donald P. Gregg. Colonel Oliver North (USMC) and his CIA lieutenant, Felix Rodriguez, ran the day-to-day operations in Mena for Bush and Casey. Profits from the cocaine, that was smuggled into the USA, were used our by our government to fund the contras, as well as to secure the domination of Central and Latin American governments by installing friendly dictators. All of these illegal activities were carried out under the fraudulent rubric of “national security.” The cocaine that was smuggled into the USA fueled the massive crack and cocaine epidemic of the 1970s & 1980s, as well as to the death & destruction of countless lives.

That Vince Foster and Hillary Clinton had been having a love affair for several years prior to Foster’s homicide is beyond dispute. It has been alleged, by reliable sources, that Vince Foster had lengthy ties to the National Security Agency (NSA) and that he had also been a key player in Iran-Contra “Enterprise.” Interestingly, Vince Foster had logged well-over 500,000 frequent flyer miles by the time of his unsolved murder. Several thousands of these miles were purchased at an “executive-fare” discount rate, reserved only for government officials, well before Vince Foster was known to be a government official. His “executive-fare” discount would make perfect sense, if he had been an NSA contract employee throughout this entire time. James R. Norman was the Senior editor of Forbes magazine: In a story, that Forbes ultimately spiked, Norman alleged that Vince Foster maintained a Swiss bank account when he was White House Deputy Counsel [since confirmed.] and that “funds were paid into that account by a foreign government, specifically by the state of Israel.” Before Vince Foster’s death, Hillary Clinton, had allegedly informed him that he was under investigation by the CIA for espionage, i.e., selling secrets to the Israelis (see on-line: Fostergate, by James R. Norman).

According to reliable sources, Vince Foster had been a behind-the-scenes manager on behalf of the NSA for Systematics, which was “an Arkansas-based bank data processing company that was integrally involved in a highly secret intelligence effort to monitor…bank transactions [globally].”  According to James R. Norman, “Systematics’ real business was moving around billions of dollars in ‘black’ money for illegal arms sales, CIA drug running, and various other nasty operations.” Norman wrote “that Systematics was also involved in ‘laundering’ funds from covert operations including drugs and arms sales [that were] related to activities in and around Mena, Ark.” and “that Hillary Rodham Clinton was also a beneficiary of funds from Foster’s Swiss account.” (See, on-line: “Part 1: Allegations re Vince Foster, the NSA, and Bank Spying”).

According to the responding EMTs, Foster had been shot twice, once just below the right ear under the jaw line and once in the mouth. An unnamed person, who originally reported the body, claimed that there was no gun at the scene. A CIA police officer/guard was the first official on the scene before the EMTs got there. A semiautomatic handgun was identified, at the scene, by an EMT. After the EMTs departed, the original gun was replaced by a revolver that was composed of two separate guns. This gun had been wiped clean of fingerprints, except for a partial print that was not Vince Foster’s. Rug fibers were found all over Foster’s clothes and hair. Shooting a person behind the right ear with a .22 caliber handgun is a favorite method of professional assassins.

Foster’s executive assistant testified under oath that Vince Foster, had told her to put two, one inch thick, NSA binders into the safe of the White House Counsel, Bernard Nussbaum. “Foster was not on a routing list for such sensitive documents, did not have a high enough security clearance for them, and must have gotten them from someone in or close to the oval office,” wrote James Norman. A document related to Systematics, which itself “was clearly part of a massive illegal money-laundering operation,” disappeared from Foster’s office after his death.

An encrypted code number for a Swiss bank account was found in the trunk of the murdered Barry Seal along with the personal telephone number of Vice President Bush. Secretary of Defense, Caspar “Cap” Weinberger had 2.3 million dollars removed from his Swiss bank by hackers, who used this encrypted code. Was Weinberger also taking kickbacks from the sale of drugs and arms?

How Dr. Porter and Allison Mack worked to recruit a teenage girl to the sex slaver cult of NXIVM
Donald Trump’s Dirty Underworld