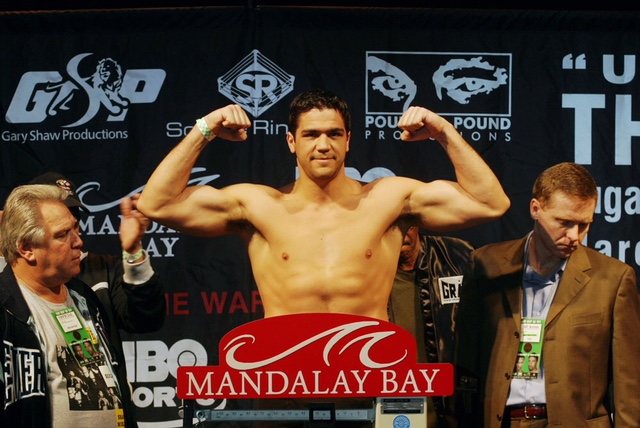 There was a time not too long ago when the City of Niagara Falls was capable of putting on a show that could attract thousands of visitors without the lure of a slot machine.

That was, of course, before the Seneca Niagara Casino opened on Fourth St. on Dec. 31, 2002, on the site formerly occupied by the Niagara Falls Convention and Civic Center.

It was just the year before–in 2001– that thousands jammed the old Convention Center to see “Baby” Joe Mesi score two TKO victories on his way to the world number one ranking in putting together one of the longest unbeaten records in professional boxing history, 36 in all.

Tonawanda native “Baby” Joe Mesi was at the height of his fame when he took the ring in Niagara Falls, known as the region’s “third professional franchise” with the Bills and Sabres being the other two and as popular a sports figure this area has ever known.

It looked like the sky was the limit for Mesi’s career as fans recall the excitement generated by his ring exploits, particularly those two nights in April and in July in Niagara Falls when he stopped highly regarded Cuban fighter Jorge Luis Gonzalez and then won a TKO over “Smokin” Joe Cooper who had once fought for the heavyweight title.

“I was at both fights and the excitement was incredible,” recalls Angelo Morinello who owns the Italian restaurant La Cucina Di Mamma in Niagara Falls.  “It seemed like everybody was there, everybody you knew came to cheer on “Baby” Joe.”

They were great times for “Baby” Joe and Niagara Falls, and while Mesi’s boxing career was cut short by injury in 2004 when he was sidelined for two years by a head injury, losing his number one ranking by the World Boxing Council, he never lost his popularity with local fans, the ones that turned out to see him take the ring in Niagara Falls.

The honors may be a little late coming, but nonetheless “Baby” Joe is grateful and appreciative his unbeaten career is finally being recognized and he vividly recalls the fights in Niagara Falls. “It was just a great venue and I’ll never forget those nights,” said “Baby” Joe recentely.  “It was a big part of my career and my boxing history, and I’m so glad I was able to give Niagara Falls and Western New York something to cheer about.

Joe and his wife Michele have three children and these days Joe works as a medical supply salesman for Abbott Medical. His ring victories in Niagara Falls are in stark contrast to the dismal plight of the Cataract City these days as it struggles to even come up with $25,000 for a July 4th fireworks display in the midst of the gaming dispute that has depleted the citys treasury with no slot revenue coming in.

There’s no savior in sight for the city’s bleak financial situation and it is too bad there wasn’t a sports star like a Joe Mesi to ride into town and give everybody a lift, like he did not too long ago at a venue that is now part of the city’s history.Maybe in hindsight, city and state leaders would have been better off keeping the Convention Center around and putting on events instead of putting all their money on a gambling casino that pays no taxes and pays nothing for the use of the land in the center of the city as the gaming dispute drags on.

Too bad you can’t come back for one more great fight, Joe. Niagara Falls could sure use your drawing power in the same way the city was able to cash in on Nik Wallenda’s tightrope walk across the falls in 2012.

Sadly, Nik is gone, and so are you.  But Niagara Falls won’t forget either one of you anytime soon.   Well, we still have the casino.  Maybe a lot of folks would trade it it for a convention center, remembering those glory nights cheering on the area’s best fighter ever.