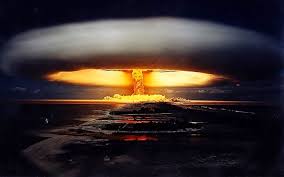 By George Cassidy Payne
As of 2017, the U.S. has an inventory of 6,800 nuclear warheads. The largest bomb currently in service is the B83, with a maximum yield of 1.2 megatons. From 1945 to 1992, as part of the nuclear arms race, the U.S. conducted around 1,054 nuclear tests by official count, including 216 atmospheric, underwater, and space tests. The peak occurred between 1961-62, when 340 megatons were detonated in the atmosphere by the United States and Soviet Union. During the final stages of WWII, the U.S. detonated two nuclear weapons over the Japanese cities of Hiroshima and Nagasaki on August 6 and 9, 1945. Commenting on the unprecedented devastation, science fiction writer Ray Bradbury said: “After Hiroshima was bombed, I saw a photograph of the side of a house with the shadows of the people who had lived there burned into the wall from the intensity of the bomb. The people were gone, but their shadows remained.”
Psychologist and Holocaust survivor Viktor Frankl added: “Since Auschwitz, we know what man is capable of. And since Hiroshima we know what is at stake.”
It would behoove the Trump administration to remember that the United States is the first and only nation to use a nuclear weapon on other human beings. Aside from the economic and political reasons to back out of the Iran nuclear deal, the president should take a long, hard look in the mirror and ask what he has done to denuclearize the United States of America. If getting rid of these evil weapons of mass destruction is a moral imperative, how does getting out of this deal progress that cause?
That said, it is not mysterious why Trump ultimately pulled out of the deal: he wanted to assuage Israel, punish Iran, exert power in the Middle-East, send a message to North Korea, Russia, and Syria, embarrass Barack Obama, fulfill a campaign promise, renegotiate a deal that favors American interests, and more. But Trump cannot avoid the hypocrisy of history. Whereas Iran was at least willing to limit its nuclear program in return for a lifting of economic sanctions, the United States has more nukes than any other nation in the world. The United States has tested more nukes than any other nation, and the U.S. has actually used them. When put in this context, who is the real regime of great terror?

Part 6: Secret Tapes: Salinas claims Bouchey, Dones, Natalie, Vicente, Edmondson, Parlato and others sought to extort $10 million from NXIVM!
A CALIFORNIA CONGRESSMAN WHO TALKED A LOT… AND SAID NOTHING