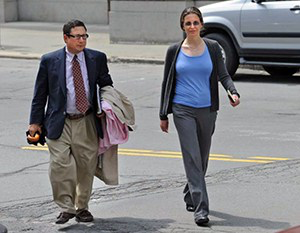 If the WDNY declines, the question is “why not?”

In 2007, the publisher of this publication entered into an agreement with Clare Bronfman to help secure the Bronfman sister’s [Clare and Sara’s] real estate in Los Angeles, after a contractor in Los Angeles had mismanaged the project. After securing ownership of the properties for the heiress, Parlato was summarily terminated. Bronfman breached the employment contract and engagement.

The Bronfmans did not immediately sue or criminally complain against Parlato, as they needed his assistance in the civil suit against the L.A. contractor, in the case of Precision v. Plyam.

Parlato assisted the Bronfmans in that civil suit, which they won, unaware that as soon as Parlato helped them secure a successful $10.3 million verdict, they would turn on him, filing a civil complaint alleging fraud, and initiating or furthering a criminal complaint in the Western District of New York.

In 2015, Parlato was indicted in the WDNY for, inter alia, defrauding the Bronfmans by wire of an interest they allegedly had in the One Niagara Building, a building Parlato developed in Niagara Falls, NY. The WDNY U.S. Attorney apparently tired of that allegation, and by May 23, 2018, after nearly three years of the pending indictment lingering in the WDNY federal court, the WDNY U.S. Attorney superseded the indictment, curiously dropping the Bronfmans from the list of alleged victims of fraud.

Perjury is defined under 18 U.S.C. Section 1621 as “having taken an oath…in any case in which a law of the United States authorizes an oath to be administered, that he will testify…[truthfully][and] willfully and contrary to such oath states or subscribes any material matter which he does not believe to be true.” Simply put, lying under oath.

Another federal crime, 18 U.S.C. Section 1001 makes it a felony to “falsify, conceal, or cover up by any trick, scheme, or device a material fact” or to make or use false writings or documents knowing them to be false, or to make fraudulent written statements. The elements of the crime are a statement, falsity, materiality, specific intent, and agency jurisdiction. The FBI and the IRS are within that contemplated jurisdiction. While the Federal Government may have been deceived, it is not even necessary to demonstrate that they were deceived.

Federal Courts, such as the Fifth Circuit Court of Appeals in United States v. Godwin, have held that       § 1001’s purpose is to protect the government “against those who would cheat or mislead it in the administration of its programs[.]” The crime applies to oral as well as written statements. As to the materiality requirement of the crime, statements intended to misdirect government investigators qualifies as material, even if the statements could not have succeeded. In the WDNY, the materiality requirement is met when the false statement is capable of influencing or affecting governmental function.

Evidence suggests Clare Bronfman misled law enforcement in the WDNY. In her March 2011 civil testimony in California, Clare testified under oath that the $1 million dollar agreement between her, her sister, and Parlato was not memorialized or agreed to in a Letter of Intent where Parlato was to receive one-third of the profits of the business venture.

In the California case, Clare testified that the $1 million dollar agreement between her, her sister and Parlato and Parlato’s compensation were separate agreements.

As to Parlato’s compensation Clare testified that she paid him $30 to $35 per hour.

Then, less than three months later, in the Western District of New York, before the Federal Grand Jury, as was unsealed on Pacer.gov. in Parlato’s motion to dismiss the federal indictment against him, Clare testified that the Letter of Intent was their agreement that she entered into with Parlato.

Problematically for Clare, fast forward a year later, and Clare reverted back to her California story (more or less), again under oath, but this time in a New York State court, that the $1 million was “loaned” without a written agreement. 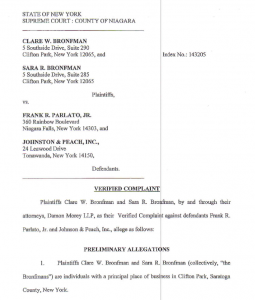 Testimony aside, misrepresentations and outright falsehoods that Clare might have made to WDNY investigators outside of the Grand Jury, in interviews and other correspondence may be the basis for a Section 1001 charge. It appears highly likely that Bronfman misled federal prosecutors in the Western District of New York in order to obtain an indictment of Parlato. Indeed, as EDNY prosecutors are aware, Bronfman has paid millions to attorneys to secure indictments and litigiously harass ex-cult members and critics, as well as ex-employees, such as Senator Gillibrand’s father.

Bronfman, by herself or with her attorney, William F. Savino, may have deliberately misled prosecutors, lying about a material fact: the agreement entered into with Parlato, i.e. the Letter of Intent, which Clare testified elsewhere was never entered into. In testifying that it was an agreement entered into, Clare provided evidence that was intended by her to form the basis of wire fraud.

Only the WDNY prosecutors and federal agents know what statements were made to them by Clare Bronfman or her attorney/s. But it may very well warrant their investigation into whether or not Clare and or her, or by and through, her attorney misled them into prosecuting Parlato under the theory that Parlato defrauded them.

As to Bronfman’s attorney, William F. Savino, it appears he might have acted with a reckless disregard for the truth in suborning Clare’s perjury in 2012 in the verified complaint, and any misrepresentations he might have made to federal law enforcement during the course of their investigation in order to achieve an indictment of Parlato. In fact, sources say that Savino frequently communicated with former AUSA Tony Bruce, and continued to press for Parlato’s indictment.

If Savino made false statements, recklessly, to federal prosecutors in connection with his sex-cult financier client/s, he may be in legal hot water.

Curiously, the WDNY has since dropped the Bronfmans from the superseding indictment of Parlato. It may want to revisit what statements were made to federal law enforcement to cause it to pursue a fraud case. Should they do so, Clare Bronfman, and possibly Sara Bronfman, could grace Buffalo once again, as defendants in a criminal action for lying to the FBI, and or committing perjury.