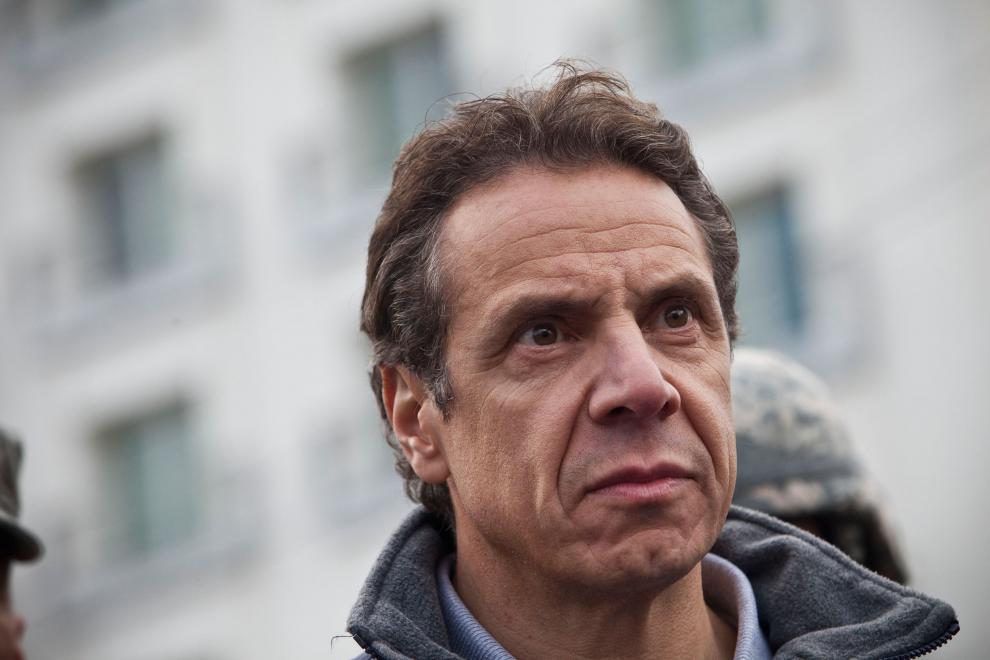 NEW YORK, NY — In his address to the Democratic State Party today, Andrew Cuomo said he was championing women’s rights in New York. But Cuomo’s record of being an “ally” to women includes ignoring numerous reports of sexual harassment within his own administration. When challenged on this record by a female reporter, Cuomo was so patronizing in his response that he eventually was forced to apologize.

Victim Says Cuomo “Ignored Her Pleas To Investigate Sexual Harassment Complaints Against [Cuomo Advisor Sam] Hoyt.” According to the Buffalo News, “What began as a ‘flirty’ relationship between a state worker and a powerful official now threatens to ensnare the governor of New York. Andrew M. Cuomo is named in a federal lawsuit that Lisa M. Cater, of Buffalo, filed after she heard some of Cuomo’s top lieutenants praising Sam Hoyt upon his resignation last month as a gubernatorial confidante, even as probes into the former economic development official’s alleged sexual harassment continued. She alleges that Cuomo ignored her pleas to investigate her sexual harassment complaints against Hoyt, while Buffalo Republicans renewed their questions. ‘What did Andrew Cuomo know and when did he know it?’ Erie County Republican Chairman Nicholas A. Langworthy asked again Sunday. ‘And did he and his ranking subordinates help Sam orchestrate what was essentially hush money?’ Administration officials, however, dismissed any idea the lawsuit should enter the political arena.” [Buffalo News, 11/20/17]

New York Indivisible Criticized Cuomo For His Handling Of Harassment Claims Against Sen. Jeff Klein And For Calling For Investigations But “[Offering] No Details On Who Would Handle It.” According to the New York Times, “Gov. Andrew M. Cuomo, who has worked closely with the Independent Democratic Conference, and has been accused of facilitating the group’s partnership with Mr. Flanagan, has twice called for an investigation, but has offered no details on who would handle it. That has not satisfied some activists and protesters who feel that the governor should be more outspoken, particularly considering the national reckoning over sexual harassment in the workplace — something Mr. Cuomo has promised will be a major part of his 2018 agenda. ‘He has said the bare minimum to slip away from any responsibility,’ said Heather Stewart, of the group Empire State Indivisible, calling Mr. Cuomo a ‘poor champion for justice.’” [New York Times, 12/13/17]

Cuomo Forced to Apologize to Female Reporter after She Challenged his Record on Sexual Harassment. Cuomo recently made headlines for trying to “teach” a woman reporter, Karen Dewitt, about sexual harassment. In a cringe-inducing video, Cuomo refuses to answer Dewitt’s questions about the Hoyt case, telling her that sexual harassment “is about you” and that her question did “a disservice to women.” He was ultimately forced to apologize. [Splinter, 12/13/17]

This message from Cynthia for New York

Desperate for dough, Sex-Slave Cult Lieutenant ‘Prefect’ Is Taking Students for only $10k per month
Cuomo Nationalizes Race for NY Governor, But Not How He’d Hoped