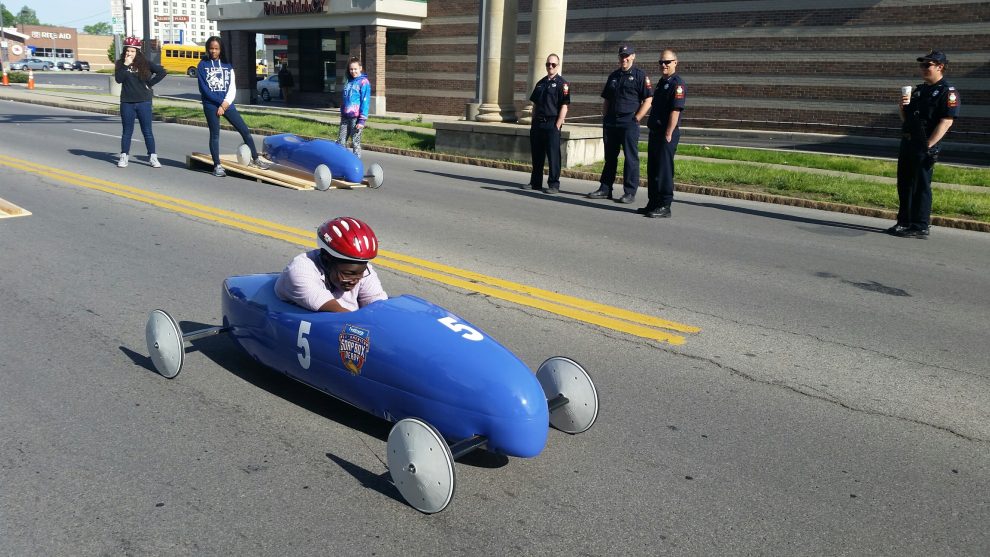 STEMBox RACE:As Gaskill Preparatory School 7thgrade student Neville Parchment speeds down the gentle incline of Pine Avenue in his #6 car in front of the Niagara Arts and Cultural Center, LaSalle Preparatory School student Vincent Schiro was pretty juiced in talking about his participation in the STEMBox Car trials on this past Monday as he waited for his opportunity to ride down Pine. The main race event will be just one of the events planned for the upcoming Memorial Day 2018 Weekend Extravaganza, which will have something for everyone to do.

Young Schiro said of the event that, “It’s pretty cool. Kids get to build cars and they get to race it.” He said that he got involved said that he saw it at his school and it was on the morning announcements, “And so, it looked cool so I just signed up for it, and brought a few of my friends and we just made a car.”

Actually, Schiro and friends joined in to make the 8thcar that will be participating on Pine Avenue on Monday, May 28th, 2018 in the finals. The setup for the event will be at 9:00 a.m., the race itself at 10:00, and a good time with Kicking-It-With-the-Cops food and refreshments.

The timely event was the idea of Darne Hamilton and was carried by me, Ken Hamilton, to teacher’s union president Marcus Latham, who in turn fleshed out this year’s event with preparatory schools STEM Coordinator Richard Clark, school psychologist Bryan Rotella, and Niagara Falls teachers Mike McGrath, Ed Wisniewski, Richard Benator and Kris Green, and myself.  This year’s cars were obtained through a grant written by Stan Wojton.

With the projected success of this event, Maryvale Schools Superintendent Joseph D’Angelo has expressed an interest in participating in next year’s event, as well as Niagara-Wheatfield. Arrangements will soon be made to make the competition open to other Niagara County school districts as well as those on Grand Island and Maryvale.

When Schiro was asked if he had learned anything, which is the whole point of the Science, Technology, Engineering and Math STEMBox races, he responded, “We learned how to put wheels on a car and build a racing car.” Schiro then expressed an ongoing willingness to continue in the mechanics of the event.

While most Niagarans won’t remember the days when, in celebratory cowboy attire, the Oklahoma-born Mayor E. Dent Lackey rode his white stallion down Main Street in the lead of the huge parades of yesteryears, hopefully modern Niagarans won’t forget the Memorial Day parades down Pine Avenue in recent years either.  Ken Tompkins and his crew have Pine Avenue decked in the Stars and Stripes on every lamppost between Main Street and Robbins Drive in preparation of what could be the largest parade that the city has ever had. More than 100 marching groups will be participating. To the delight of thousands of spectators and cheering kids, the parade will step-off from the City Market at 10 o’clock a.m. with the last of the marchers reaching the American Veterans Monuments at (Hyde Park) Niagara Falls at around noon.

Spectators are encouraged to continue into the park to participate in the ceremonies of recognition of those military men and women who gave their lives in the cause of world freedom. The annual event usually lasts about one-hour.

TETHERERD BALLOON EVENT ON MEMORIAL DAY SUNDAY:  On Sunday, May 27th, 2018, 3:00 p.m., the Niagara Falls Veterans Monument Commission, in conjunction with Otto Rendanz and M. J. Colucci funeral homes, will be holding a tethered balloon Family Memorial Service for all residents of Niagara Falls and the surrounding area. The purpose is to allow families to share both their military and non-military losses in the last few years with each other and to “let go” our grief and celebrate the memories.  All are invited to hear interfaith prayers and songs, and to enjoy the company of each other.