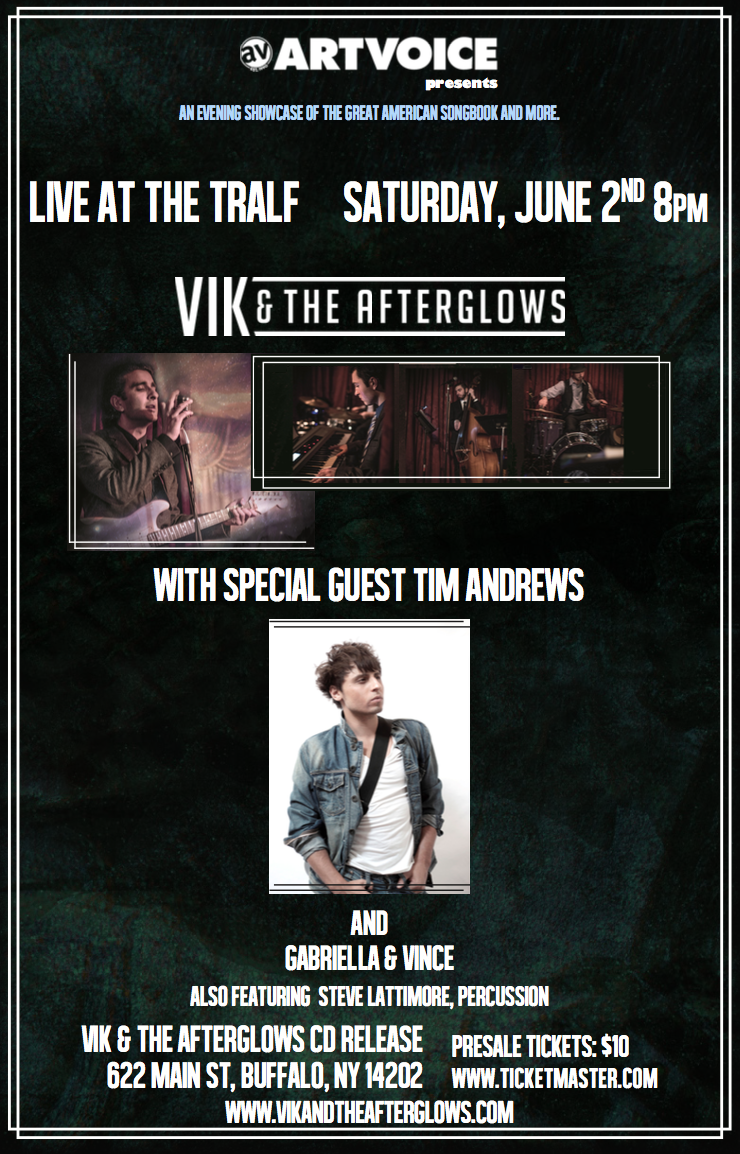 This Saturday, June 2 at Buffalo’s Tralf Music Hall, located at 622 Main St, at 8:00 p.m., prepare for a musical extravaganza with three of Buffalo’s top musical acts: Vik and the Afterglows, Tim Andrews, and Vince & Gabriella.

The headline event will feature Vik and the Afterglows, a dynamic four-piece jazz-pop ensemble that  reimagines the music of the early 20th century, bringing staples of the era into modern times with the same richness and warmth you would expect from Frank Sinatra himself, done with a modern twist that is entirely their own. The Afterglows leader and frontman, Vik Bhargava, has not limited the repertoire to the American standards, either, with hits made famous by Bob Dylan and others; in addition to hits made famous by Frank Sinatra and Ella Fitzgerald, a wealth of uniquely crafted selections makes the Afterglows experience. This is an exciting band that is meant to be heard, and will take you back to the golden age of jazz and beyond!

The Afterglow lineup consists of Robert Helms on percussion, a mammoth percussionist from Niagara Falls, the tasteful and ebullient Jake Malone-Brancato on keys, the transcendent Matthew Eppolito on the contrabass, and the consummate vocalist and frontman, Vik Bhargava, who is also the group’s guitarist.

Joining Vik and the Afterglows is Tim Andrews, a rising and acclaimed Folk American singer who began his music career in Buffalo, N.Y. and has traveled the nation ever since. Andrews is known for his powerful tenor voice and delivery. Having been classically trained, Andrews turned his talents to Americana, or folk music, taking inspiration from his journeys to throughout the American Heartland. He has traveled from Buffalo, to Nashville, to Key West, to California, performing his acclaimed original pieces, such as “Lonesome Road,” and the inspirational “Better Days” along the way.

The musical bonanza will also include a performance by the Gabriella & Vince duo. The pair have serenaded fans with their distinctive treatment of popular songs from the 1930s, infusing the music with modern, and the occasional avant-garde touch. Gabriella is a classically-trained vocalist, who graces the microphone with a variety of jazz, classical-art song, and popular and jazz music of the 1930s performances. She has performed in and around Buffalo and New York City and incorporates music history into her performances. Accompanying Gabriella at the piano is Vince, a “flurrious” jazz and pop pianist whom prefers “an arpeggio to a chord, and, often, a beep to a bop.”

The Saturday Tralf event will also include Vik and the Afterglows’ much anticipated debut album, CD release. When creating this debut album, Vik and the Afterglows pulled many of the songs from what is considered the Great American Songbook. “The Songbook is comprised of the greatest jazz hits of all time. From Cole Porter, to Jerome Kern, the song book is in a genre all its own,” said the frontman of Afterglows. Indeed, Vik has taken some of these unforgettable hits and made them his own in an inimitably artistic manner by drawing from the original genius of the writers, and adding his own touch. The album additionally contains three Vik and the Afterglows original compositions. Analog enthusiasts and audiophiles will additionally delight in the fact that all of the songs were recorded on analog recording equipment giving the sound a great deal of warmth and depth.

Be sure not to miss the Gabriella & Vince duo, Tim Andrews, and Vik and the Afterglows this Saturday, 8 p.m. at the Tralf Music Hall! Located at 622 Main St, Buffalo, NY 14202

Click here to post a comment
WITCHSKULL ‘The Vast Electric Dark’ reissued in celebration of their new album this June.
Should There Be A Dog In The White House?