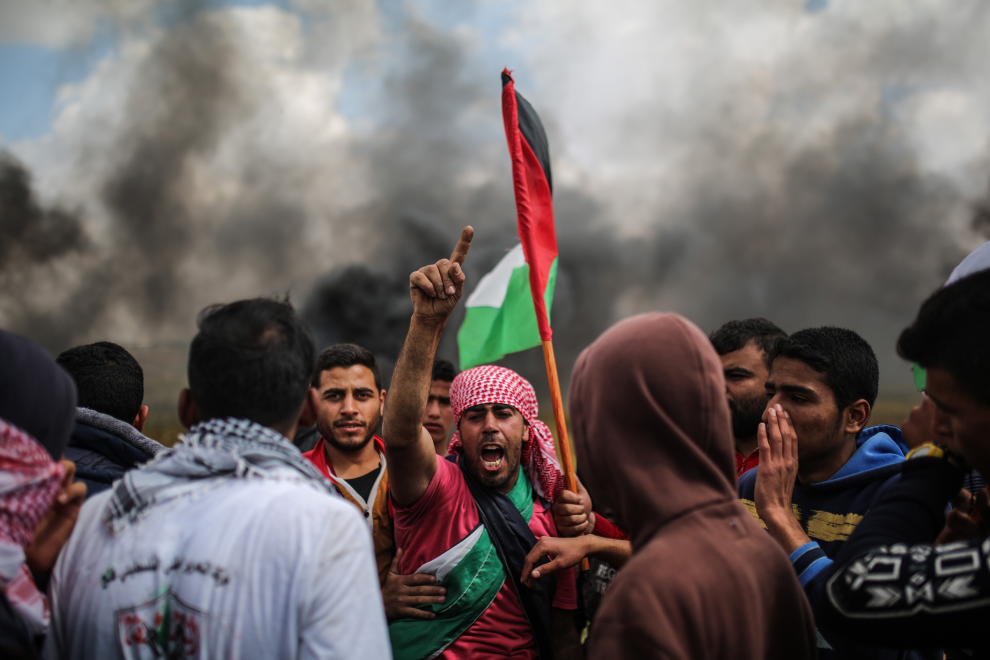 The latest demonstrations in Gaza took place as the U.S. embassy was formally relocated to Jerusalem from Tel Aviv, on the 70th anniversary of the formation of Israel. Only 40 miles from the celebration, Israeli snipers fired upon hundreds of Palestinians- often taking out their kneecaps-and shot dead 60 others for attempting to come near the border.

When it was over, more than 2,000 Palestinians were injured-at least 1,350 by gunfire. It was another brutal massacre in the history of warfare between these two rivals.  As Amos Oz has written: “the Israeli-Palestinian conflict has been a tragedy, a clash between one very powerful, very convincing, very painful claim over this land and another no less powerful, no less convincing claim.”

Almost at the exact time that I was observing this appalling bloodbath on the evening news, a report scrolled at the bottom of my television screen that said a cougar had killed one mountain biker and injured another in Washington State. Apparently the victims were mountain biking near North Bend, about 30 miles from Seattle, just after 11 a.m. when they realized that a cougar was chasing them. According to the report, the bikers were able to scare the cat away at first, but it came after them again with fatal results.

As I thought about it, the two events, at least in my mind, assumed a common meaning. Cougars attack when their territory is invaded or diminished. The thought of habitat depletion and food scarcity flashed before me. I also began to wonder about the consequences of encroachment in general, and about the primordial impulse to fight for one’s survival. Knowing full well-as someone who has never been to the region- that my metaphor is facile to say the least, I thought to myself: just how similar is the cougar attack to the slaughter in Gaza? I then remembered a list of statistics that I read on a progressive internet website that stated 95% of water is undrinkable in Gaza. Palestinians have barely 4 hours of electricity per day. 45% of the people are unemployed, 45% of Palestinian children suffer acute anemia, and 50% express no will to live.

In total, 2 million Palestinians are denied freedom of movement. It is one of the most desperate refugee camps in the world. Every couple of minutes someone in Gaza is on the verge of dying due to malnutrition. As with the few remaining cougars in those Washington woods, Palestinians-sometimes in the most tragic ways- have no viable choice but to attack or face elimination.

I realize that my metaphor is deeply problematic due to the assertion that black and brown people are like wild animals. In fact, I was going to let the whole idea go because of it. But putting aside the grotesque history of racism and slavery that has plagued our species, the fact remains that we are all animals.

Why does it need to be automatically taken as an insult to be compared with other animals? Cougars epitomize strength, perceptiveness, resilience, devotion, beauty, and more. They are also threatened to near extinction. In every African culture, there is a rich and complex mythological tradition that embraces animals as spiritual messengers and teachers. Even today animism is one of the most potent religious forces in the world. It is a personal choice to demerit animals by suggesting they have no comparable traits or relational value for humans. It is actually indicative of the schism between humans and Nature which exist in the world today. Going even further, it is indicative of the tremendous animosity, mistrust, and sadness that has possessed these two cultures for hundreds of years.

After granting possessory rights to non customers, Starbucks should take next step – pricing based on ability to pay!
Phony Russia Gate, Roger Stone & the lies of Randy Credico
Comment