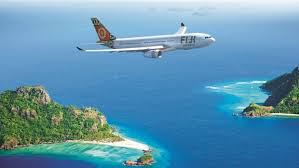 According to the website Crazy Days and Nights, Clare Bronfman has been busy – possibly providing provisions for her island sanctuary in the South Pacific. Clare owns 80 percent of Wakaya Island in Fiji.

Here is what the website says. It began as a blind item on May 25:

“There sure is a lot of back and forth of two jets, one of which is registered to this very wealthy family, between various properties in the US owned by the family and an island in the South Pacific. Apparently in the two weeks it has been going on, no one from any agency has even inspected the outgoing planes or the passengers or what they are carrying. On the other end, everything is greased with local officials so nothing has to be done. One celebrity offspring is in the South Pacific, but no one knows if she will stay.”

On June 1, the answer was provided: “Clare Bronfman/Wakaya Island”.

This suggest Clare is in Fiji.  Today, from a reputable source I was told Clare is in France. She may be with her sister, Sara.

Clare has not been seen in Clifton Park since her birthday in early April when a party was held for her at Sara Bronfman’s mansion. Up until recently, she was staying in NYC.

As far as we know, Clare has not been indicted. Her passport is valid. If she is indicted – if she is in the US – she will be arrested and her passport will be confiscated.

If she is going to flee jurisdiction, the time to do so is prior to indictment.

Clare is one of the largest land owners in the island nation. Fiji has an unusual extradition treaty with the US. A judge in Fiji] can order Clare’s trial to be held in Fiji – not the USA.  Or he can allow the trial held in the USA but, if Clare is convicted, the judge can order Clare returned to Fiji where he can set or suspend sentence. The Fiji Attorney General can also make a determination that the US is prosecuting Clare for political reasons and refuse to extradite.

If she cannot buy off her US indictment, Clare needs to purchase her freedom from another nation.  Fiji is consistently ranked by international watchdog groups as having one of the most corrupt judiciaries in the world.

If she is in France, and delivering supplies to Fiji, perhaps the die is cast. If she is indicted in the US, if she remains in the US, she may be placed on home arrest.; If she goes to trial, she may be convicted. If convicted, she may go to prison.

If it is true she left the USA – it is possible she has fled the jurisdiction of US federal court. Unlike Raniere or Mack, she may have enough money to purchase her freedom. And maybe buy Raniere’s too someday.

Wakaya Island, 80% owned by Clare Bronfman, who may use it to seek her own asylum from the NXIVM probe.