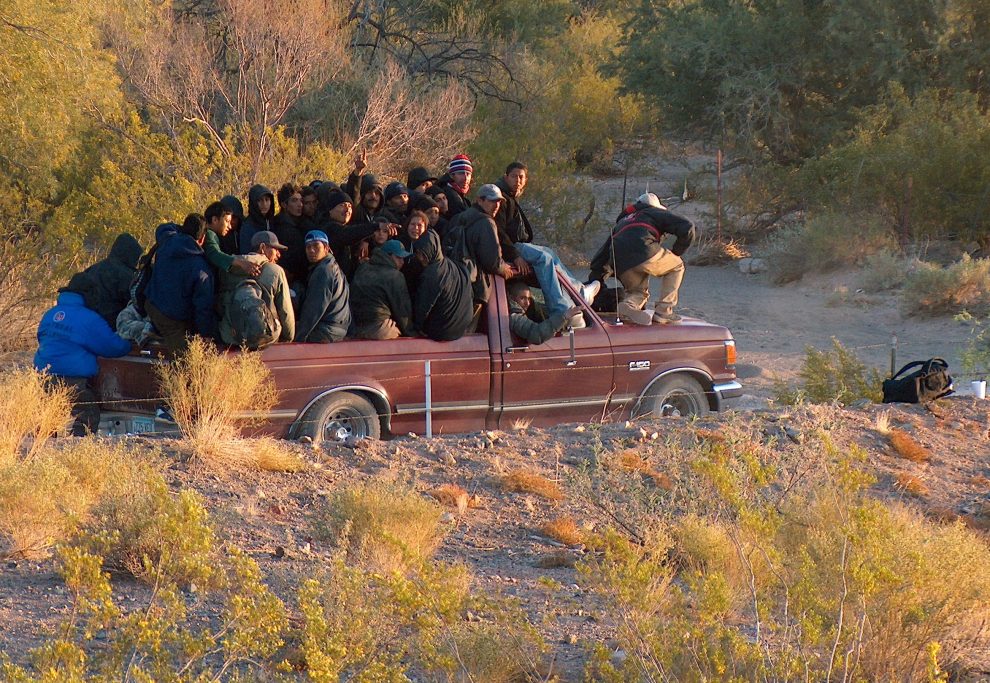 MS-13 gangsters aren’t the only dangerous people crossing our southern border. For years we’ve told you about ISIS operatives crossing unhindered into the United States. Now there is some positive news. Our Corruption Chronicles blog describes a new effort to thwart these evildoers.
A Mexican border region that Judicial Watch exposed years ago as a hotbed of Islamic terrorism is finally getting a wall to replace laughable “road barriers” that, not surprisingly, have failed miserably to secure the area. The big question is, why did it take so long? The much-needed fence will be erected between Santa Teresa, New Mexico, and Ciudad Juárez in the Mexican state of Chihuahua. It’s an area where ISIS cells operate and Juárez Cartel smugglers help terrorists through the desert and across the border. A 20-mile section of existing “vehicle barrier” located west of the Santa Teresa Port of Entry will be replaced with an 18 to 30-foot high bollard-style wall, according to an announcement issued by Customs and Border Patrol (CBP). The announcement includes pictures of the existing railing, which is a joke.

A local open borders group is organizing a protest (All Against the Wall Rally) next week near the Santa Teresa Port of Entry. “The border wall is an affront to our communities; an attack on our wildlife; and a symbol of hate, fear, and divisiveness,” the group states in its website. “We invite people from around the region and nation to join us for an event on Saturday, June 2, 5-8 pm, where we will gather lawfully and peacefully on both sides of the border in the path of construction to demonstrate our unequivocal rejection of Trump’s border wall and all that it represents.” The reality is that the area is a major national security risk and a hub of human trafficking and drug smuggling. In fact, the Santa Teresa Border Patrol Sector Chief said the following recently in a local news report: “This area of Santa Teresa operations is one of our busiest areas for illegal alien apprehension and has been for several years and a prime corridor for the smuggling of narcotics.”  Last year 25,193 illegal immigrants were apprehended and 34,189 pounds of marijuana and 140 pounds of cocaine were seized in Santa Teresa, according to government figures.

The problem is far more serious. Back in 2015 Judicial Watch reported that ISIS cells are operating in the Santa Teresa region, just a few miles from El Paso, Texas in an area known as “Anapra” situated just west of Ciudad Juárez. Another ISIS cell to the west of Ciudad Juárez, in Puerto Palomas, targets the New Mexico towns of Columbus and Deming for easy access to the United States. The report was among the first in a series resulting from Judicial Watch’s ongoing investigation into the national security threats created by the porous southern border. State and federal Law enforcement officials on both sides of the border, including a Mexican Army field officer and a Mexican Federal Police Inspector, are among Judicial Watch’s sources. At the time, Mexican intelligence sources reported that ISIS planned to exploit the railways and airport facilities in the vicinity of Santa Teresa and that ISIS “spotters” were located in New Mexico’s East Potrillo Mountains.

A year earlier Judicial Watch had already published an exposé illustrating the serious threats generated by lax security in this particular region of the southern border. An Al Qaeda terrorist (Adnan G. El Shukrijumah) on the FBI’s most wanted list for years crossed back and forth into the United States from Mexico to meet fellow militant Islamists in Texas and piloted an aircraft into the Cielo Dorado airfield—about 25 miles from Santa Teresa—in Anthony, New Mexico. The same Al Qaeda operative helped plan the 2009 bombing of talk show superstar Oprah Winfrey’s Chicago studios and the iconic Sears Tower (renamed Willis Tower), a story that Judicial Watch broke days earlier. Despite being one of the FBI’s most wanted terrorists, Shukrijumah for years managed to slip in and out of the U.S. through the southern border to meet fellow militant Islamists in the El Paso region. Shukrijumah was eventually killed in an intelligence-borne operation in Pakistan, but the fact remains that he long eluded U.S. authorities by utilizing a vulnerable portion of the Mexican border region to conduct business.

We have borders for a reason. Those who would do away with them put all of us at risk.