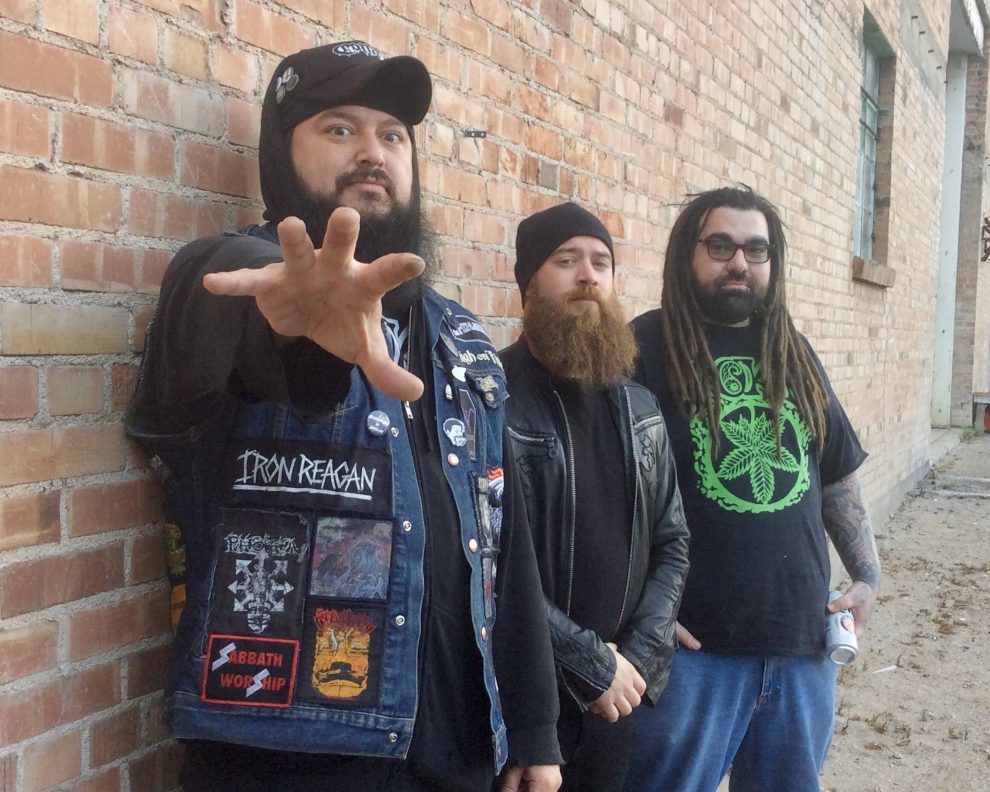 Originally from Maine, Brad Frye moved to the harsh yet beautiful expanses of New Mexico in 2010 with nothing but a backpack and a guitar.  Very simply, he wanted to be in the desert and play loud, heavy desert rock.

Working his way through the throngs of local musicians who didn’t “get it,” Brad eventually found the like-minded comrades he needed for the first incarnation of his Red Mesa trio, and things got cranking.

They recorded their debut album in 2014, then were tapped by iconic heavy label Ripple Music to contribute an EP’s worth of songs to Volume 4 of their Second Coming of the Heavy series.

Red Mesa were making strides and seemed poised for a big move, as Brad began writing the ideas and parts that would become the songs for their next album in the summer of 2017.

That’s when things came to an abrupt stop.  First, they parted ways with their bass player, then the drummer left for personal reasons.  Brad found himself with studio time booked, a record mostly written, and no band.

Undeterred, Brad and studio owner Matthew Tobias came up with a game plan, pulling together the sessions with borrowed musicians and Tobias himself on drums, with Brad handling vocals, guitars, and some bass to assemble the album.

The pressure seems to have been a positive catalyst.

The Devil and the Desert is an engrossing concept album that, according to Indy Metal Vault, “evolves as it goes, moving from a swampy/bluesy acoustic kind of thing to a style of desert/stoner rock that’s far more psychedelic and epic.”

The Obelisk adds, “There would seem to be a narrative of hallucinogens, the arrival of the devil, the desert itself, and so on, and musically, the material becomes more severe the deeper into the record one goes.”

“It’s my first attempt at writing a concept album. The album takes place in the desert. It’s a journey through a strange desert land where the protagonist beckons the devil to “come out to play.” The songs weave through different experiences and landscapes where the character searches for the devil only to find out the devil is himself. A construct of being a human being. We can choose to be a good or bad person. This album is my creative way of dealing with personal issues of depression, isolation, frustration, fear, self-destructive behavior, lust, addiction. Things that we all struggle with. It was very relieving for me to finish recording this album.”

With the album finished, the right band members soon fell into place, in the form of drummer Roman Barhan and bassist Randy Martinez.  Now, in time for the album’s June 1st release, Red Mesa is firing on all cylinders again, perhaps better than ever before, cutting their live chops at a furious pace.

Desert Records, the imprint Brad launched to support Red Mesa’s ambitions as well as to help put New Mexico on the heavy music map, releases The Devil and the Desert on June 1st.

Red Mesa will also appear on Magnetic Eye Records‘ massive Pink Floyd project this fall, contributing their rendition of “Breathe” to the label’s eagerly awaited Best of Pink Floydpackage alongside Ruby the Hatchet, Domkraft, Year of the Cobra, Howling Giant, and more.

Indy Metal Vault is streaming the entire The Devil and the Desert album right here, which can also be streamed directly on Soundcloud or purchased via the Red Mesa Bandcamp.

What Is the Cost of Nursing Home Care?
Poem by Phone available