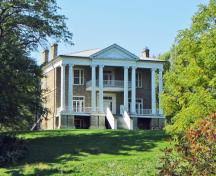 Willowbank Celebrates its 15th Year as a National Historic Site
After two years of performing requisite upgrades on the 184-year-old estate house, Willowbank is opening on Saturday, June 2nd for tours running at 11:00 am and 2:00 pm.
With the support of donors and funders, Willowbank spent almost $1.2 million to meet new Building Code requirements for barrier free accessibility, fire safety, heating, ventilating, electricity, communications and restoration. The house has a new servery kitchen and some finishes which replicate the Hamilton family house of 1836 to 1936 while retaining all the wallpaper evidence of the Bright family house from 1936 to 1966. Hamiltons and Brights are two pioneering Canadian families who made their mark on history and the house.
The Willowbank House is currently used as a school of the restoration arts and heritage conservation work will continue on in the building. The estate is currently developing as museum and research centre. Considerable work is also still to be done maintaining the historic Laura Secord Public School which Willowbank purchased in 2012 and finishing the drystone wall
building, next to the Brad and Bluma Appel Barn. The drystone wall building is unique in North America.
Originally, the deep ravine that runs along the north side of the property into the Niagara River was a portage for many peoples from about the 8th century. Archaeological digs on the Willowbank plateau reveal many hearth sites stretching back over 10,000 years.
Willowbank wishes to extend its gratitude for funding from Parks Canada and the RED Program as well as the Weathertop Foundation USA, the Urban family, and Elizabeth Oliver-Malone.

Toni King: Prepare for Hurricanes, Tornadoes, Earthquakes with an Emergency Survival Plan
The Captain was no Kangaroo
Comment