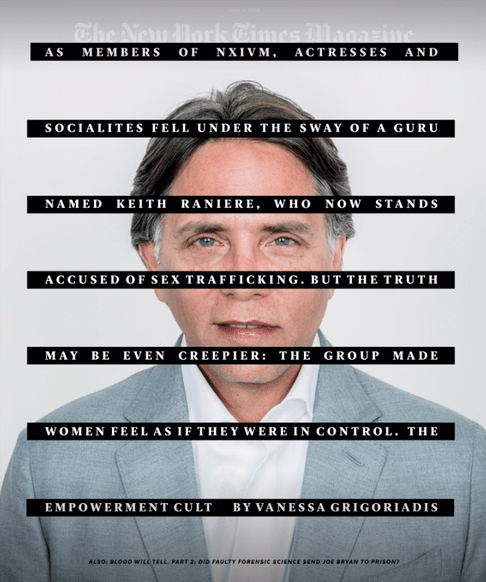 Keith Raniere’s lawyers made a motion for him to be released on $10 million bail and home arrest with two guards round the clock.

I have to believe the feds will make some arrests pretty soon – in answer to this nonsense.  The prosecution has until Friday June 8 to respond to the bail motion. {maybe we will just see some arrests.]

In the motion, there are some pretty wild, extravagant and dishonest claims.

Personally I think there is a reasonable chance Raniere might try to escape if the motion is granted. He will have his slaves galvanized – remember they actually chased the police car in Mexico to try to free him.

Indeed Judge Nicholas G. Garaufis will go down in history if Raniere escapes.

Raniere’s top lieutenants – Emiliano Salinas and Alex Betancourt – both have elite teams of military operatives. Both men have around the clock security – six at a time – [Raniere is only to be guarded by two men.]

If he should escape, it will be quite a stir and a worldwide media sensation.

if the judge turns down his request, his attorneys can appeal it to the US Second Circuit [cost to appeal about $100,000. if that is turned down they can appeal to the US Supreme Court – $250,000]. Isn’t it nice to see Raniere/Bronfman spending money on lawyers to defend themselves instead of trying to destroy others.

How Much was that Motion?

As far as the bail motion is concerned, I estimate it cost Bronfman/Raniere about $100,000 – $200,000 for the five lawyers to put it together- with research and  interviews with the Security Firm etc.  [Indeed everybody is getting fat off this but Clare Bronfman who is as skinny as ever.]

If the bail is approved, Raniere [or Clare Bronfman] would retain TorchStone, an elite security company, to provide:

A house/mansion for Raniere to live in in NYC – with 24-hour armed guards [two guards per shift] to see to it that Raniere does not escape. Plus a supervisor to oversee and schedule the security detail.

Not bad for a man who according to  a New York Times article by Vanessa Grigoriadis, who quotes Raniere as saying, ““I don’t pay taxes because I live under the poverty level.”

My guess is Raniere does not get bail. but who knows?

Bronfman to Guard Cult Leader? Owner of security company proposed to guard Raniere partnered with Bronfman attorney!
Raniere ‘recognized by Dalai Lama’ – but not in the way Raniere’s attorneys claim