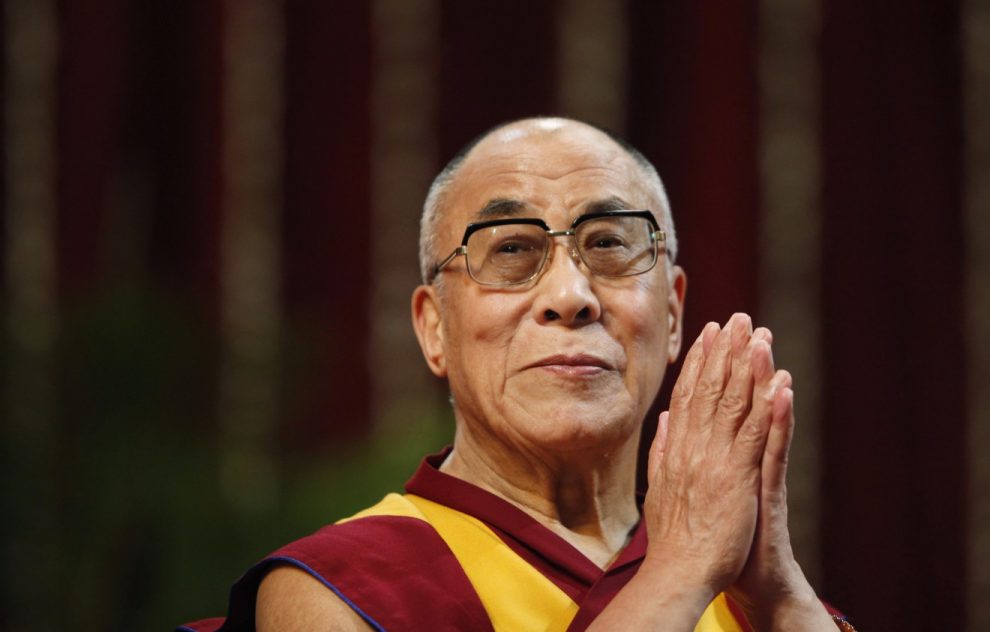 In their motion for bail for Keith Raniere, his attorneys said Raneire is “recognized by the Dalai Lama.”

They wrote, “In a word, Raniere is an ethicist. His ethical teachings, which have focused on raising the level of humanity within each person, have been a source of help and inspiration to thousands of people. He has been recognized by no less than the Dalai Lama.”

But contrary to what his attorneys imply, the Dalai Lama did not recognize him in a favorable light nor did he endorse Raniere. He did recognize him – like one might recognize a mangy dog or a scalawag.

the Dalai Lama appeared in Albany, May 6, 2009 at the request and expense of Clare and Sara Bronfman. He spoke before a mainly NXIVM audience. He did give Raniere, and the two Bronfmans a white scarf – which represents the Dalai Lama’s wish for them to be pure. [A fairly nonsensical wish I might add].

See youtube of Dalai Lama speech in Albany
The following where the Dalai Lama ‘recognizes” Raniere comes at 44:10.

The Dalai Lama said this [my clarifications in bold and brackets]:

Oh. Firstly I received an invitation [from Bronfmans to come and speak] that, in principle, I accepted. Then I received some request that I should not go there because of this [Raniere/NXIVM] is controversial; some allegations [made against Raniere – which caused the Dalai Lama to originally cancel his trip to speak].

Then we carry further investigation. Then finally, including this organization’s teacher [Raniere?], and his, some friend, {Nancy Salzman] came to see me in Dharamsala [India] and I discuss, I observe, basically, they are carrying some kind of movement about ethics.

Then, as I mentioned earlier, it is my moral responsibility to support any movement by any person who carry, who are working for ethics. Because in today’s world many problems essentially [are] our own creation. Nobody want[s] more problems, but due to lack of ethics, lack of principle, this unwanted man-made problems happen. Whether politician, whether businessman, whether a religious person, whether anyone, moral principle is very essential –  like backbone.

So, therefore, I felt, I feel it is my moral responsibility, but, at the same time, these allegations [against Raniere being unethical existed].

So when I met them personally in Dharamsala, I told them very friendly, very openly, ‘As far your sort of work for promotion of ethics, I fully support. Is my moral  responsibility, but, at the same time, those allegations [against you] you must make very clear. If you have done something wrong, you must accept, you must admit, and change, make correction. If you [have] not done [anything unethical], make clear all these allegations, truthfully, honestly, openly, transparently.’

Then some media –  I [am] always telling media people, ‘media people should have long nose, as long as–  [the NXIVM audience laughs and applauds – they thought I think that the Dalai Lama was saying long nose of the media as in Pinocchio but that’s not what he meant.] … wait, wait, wait… [applause dies down]as long as an elephant nose and smell, in the front and behind. That’s very important. And make clear to the public what’s going on. Whether with the politician or with the mayor or religion’s people, the bishop or myself, [media] must sort of watch and make clear, and inform public, provided it must be very honest, unbiased, objective [reporting], that’s important. Sometimes, say, one company financing a newspaper – then newspaper report [is] a little bit biased. I think not as biased as Chinese propaganda. But sometimes you see a little sort of biased sort of version also is happening. That must be avoided, must be honest, truthful.

So, now I think in front of, I think the public, I want to to tell the media people, ‘please carry continuously, all these spots where you have some doubt [about NXIVM], thorough investigation.’

And those concerned people’s side [Raniere and NXIVM] ‘Also make clear. All your work must be transparent.’

So, that’s my view. So, I feel, no problem, come here, meet people, and talk. Because of some criticism [of NXIVM] remain distance? Not much use. Come face to face and talk, friendly, bluntly. Truth always win [Hear hear!]. So, more talk, more investigation [into NXIVM], truth will become more clear clear, clear, like that. So, that’s my answer.” [applause].

We will leave it to the reader to ascertain whether Raniere’s DOS program of Bronfman-paid pubic branding and his collection of blackmail material on women members is in consonance with the Dalai Lama’s recognition of him.

Cost for Raniere for bail and security and risk of releasing him from jail — he might escape!
Artvoice Analysis of Raniere’s bail motion; Attorneys show Raniere as dedicated family man and sentimental ‘significant other’