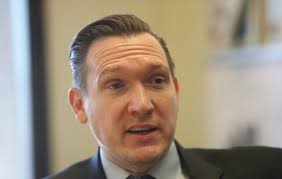 In the wake of the trade tariffs instituted by the Trump administration, Nate McMurray is touring businesses across Western New York, talking to business owners to understand how the changing economic climate is affecting them. McMurray met with the owners of Catalpa Farms today in Canandaigua who grow soy, which they primarily export to China.The price of soy has tumbled from a high of $10.70 at the start of this year’s growing season to $9.60 today as a result of the 25% tariff instituted on soybean imports, in reaction to Trump’s tariffs. The farmers said that the price drop is “killing them” and that there is a likelihood that China will begin to import soy from Argentina due to the uncompetitive price of our export. This is unacceptable.

There are no other words for the tariffs except economic warfare. Nate McMurray believes that this is posturing at the expense of the American people. The administration’s careless trade war endangers the welfare of the American people and of the people of New York’s 27th district, whose livelihoods are among the industries affected.

Trump’s increasingly combative rhetoric with Canada, one of our closest allies, as well as his erratic behavior at the G7 summit casts into doubt the administration’s commitment to the economic well-being of our citizens. “Our region is interdependent on Canada,” McMurray said of New York’s 27th Congressional District, “Turning our backs on our Canadian neighbors is unthinkable. Even just the petty words coming out of the White House are enough to seriously threaten jobs and incomes here at home. Actions have consequences. It’s not fair to our working men and women and it has to stop.”

Judicial Watch: Russia, China may have bribed Clintons
Jailed sex-cult leader’s ‘Financial Affidavit’ lists two dependents – his sons – one is not a dependent – he’s in hiding from his sex-crazed father
Comment